The HIV or HIV , is a type of virus that can cause a disease called AIDS(acquired immunodeficiency syndrome). HIV infection affects the immune system, which are the body’s natural defenses against the disease. If left untreated, serious illness can occur. Normally innocuous infections, such as influenza or bronchitis, can get worse, become very difficult to treat or even cause death. In addition, the risk of cancer is also increased.

What sets HIV apart from other viruses is that it reaches the immune system by taking control of CD4 T cells. The latter role is to coordinate the immune response when a virus occurs. When HIV uses CD4 cells to spread, it damages and destroys them. In so doing, HIV undermines the immune system from within, which has the role of fighting it (see diagram).

HIV is transmitted through body fluids: blood , sperm , vaginal secretions and breast milk . These body fluids only transmit HIV if they come into contact with an area that allows it to enter the body, a mucous membrane. Healthy skin is impervious to HIV.

Most often, the virus is contracted during unprotected sexual activity or in the past by the exchange of needles among injecting drug users. The risk of transmission through kissing with saliva exchange is zero.

In most industrialized countries, sex-to-male intercourse is the most important route of HIV transmission. However, heterosexual transmission has increased significantly since the beginning of the epidemic. 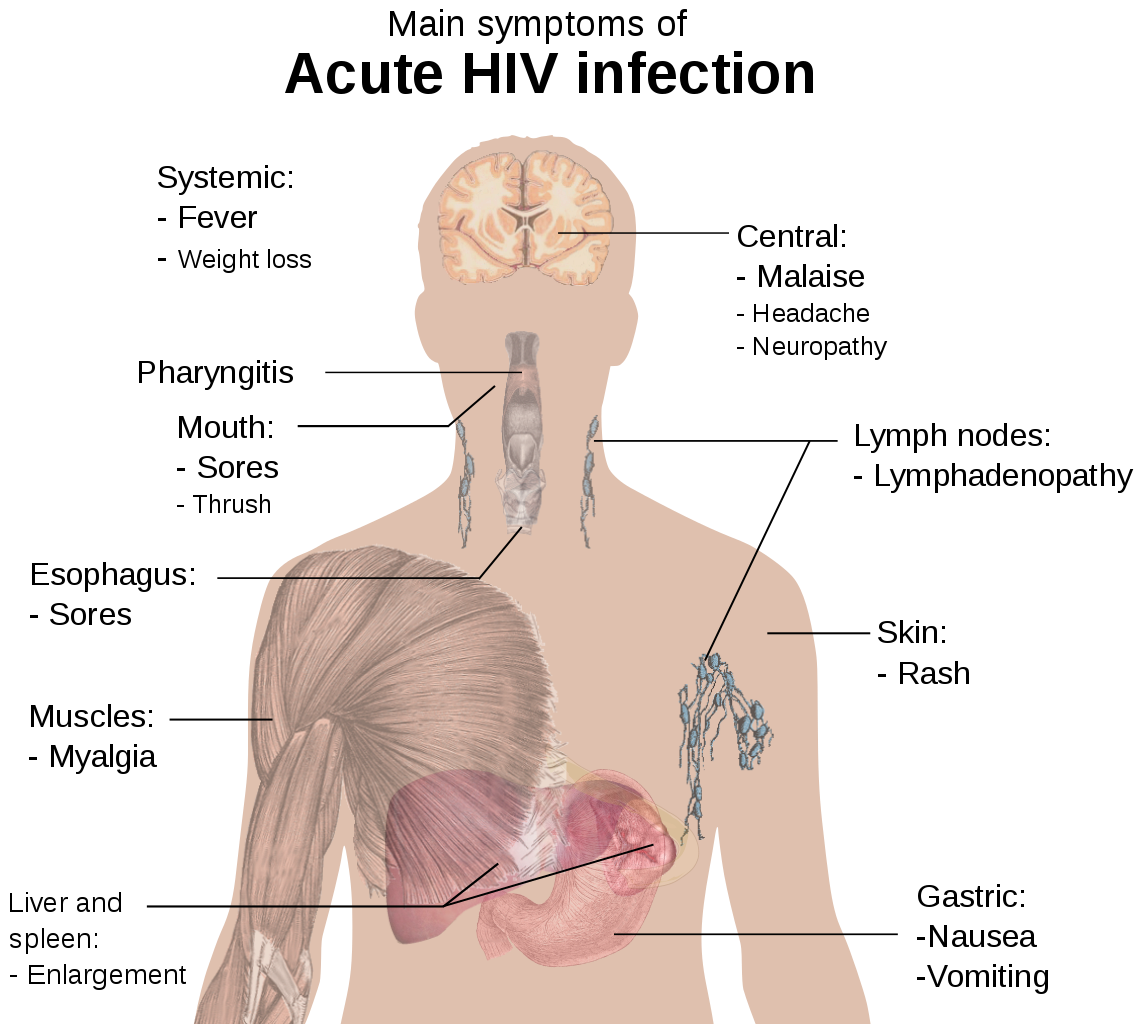 Evolution of infection to AIDS

Note . Research has shown that cardiovascular disease is more common in people with HIV because their body is subject to a higher degree of inflammation . Inflammation is known to contribute to the formation of plaques in the artery walls, which may impede blood circulation. In addition, cases of cognitive degeneration (eg, Alzheimer’s disease) related to HIV infection have also been reported.

The symptoms of AIDS (HIV)

1 sty phase or primary infection. The symptoms resemble those of influenza or mononucleosis and are present in about one in two cases. Primary infection can go unnoticed. At the time of onset, the person newly contracted HIV poses a particularly high risk of transmitting the virus, because the number of viruses present in the body (viral load) is particularly high. These symptoms persist for 1 week to 1 month, then disappear.

2  phase or asymptomatic phase. The HIV-positive person has no symptoms, even though the virus attacks the immune system mute (no symptoms).

3 th phase or AIDS phase. The symptoms appear because the immune system is overwhelmed by the virus. Some symptoms become more frequent, persistent and sometimes chronic, for example:

People at risk for HIV / AIDS

Here are the risk behaviors.

None of these treatments cure the disease , but thanks to them, the majority of people with HIV can live very long. In addition, the side effects of drugs are less troublesome than before.

The treatments against HIV / AIDS have two main components: the immediate treatment with antiretroviral therapy (ART) and the opportunistic diseases.

HIV is usually treated with highly active antiretroviral therapy (HIV being a retrovirus), a potent combination of at least 3 drugs . These antiretrovirals slow the progression of HIV by attacking the virus to minimize the viral load , which is the number of viruses (HIV) in the blood.
The price of this ART has fallen considerably, reaching 139 to 172 dollars per year per person in 2013, or even less for countries purchasing large quantities. This allows less wealthy countries to better treat their HIV-positive inhabitants. However, this price is that of treatments called front-line treatments. In case of resistance to treatment, there are second-line treatments that are much more expensive and often difficult for everyone to access, particularly in countries without a public or private health insurance system.

There are several  classes of antiretroviral drugs , and several slightly different molecules in each of them.

The treatment is adapted to each person and it is a combination of several drugs. The goal of the treatment is to obtain in 6 months an undetectable viral load.

Most people are treated with a combination of three drugs, and there are several possible choices depending on the effectiveness, immediate or long-term tolerance, the living conditions of each …

To be effective, the treatment must be followed to the letter, that is to say that you must take the tablets every day at the times prescribed by the doctor , and therefore be ready to adapt his lifestyle. Many of these medications are now available in a single daily dose. The adherence is extremely important because it also prevents the emergence of drug resistance (if the dosage of a drug drop in the body, it increases the risk that the virus changes or mutates to “survive”).

In addition, we must find the best possible balance between the effectiveness of the treatment and the maintenance of a good quality of life. The side effects of drugs can be important: fatigue, headache, loss of appetite, rash, diarrhea, etc.

The unique tablets have emerged (eg Atripla, Eviplera or Stribild combining 4 molecules). Instead of taking 3 or 4 antiretroviral drugs, for example, they are combined into a single tablet, taken once a day.

Note . Researchers are working to create “therapeutic vaccines” that would help the immune system fight infection and this research is advancing as clinical trials are underway. The goal of these vaccines will be to boost the immunity of HIV-positive people to help their bodies fight HIV and opportunistic diseases.

When one is HIV-positive, it is necessary to undergo regular examinations to detect certain diseases at their early stage. You also need to receive certain vaccines and take medication to prevent frequent infections in people with HIV / AIDS. If an opportunistic infection occurs, the doctor may recommend continuing treatment even after healing to prevent recurrence.

In case of cancer, chemotherapy or radiotherapy is used.

Deficiencies of vitamins and minerals are more common in people with HIV. Some medicines can cut appetite, and fighting the virus requires more energy and nutrients. According to scientific studies, these deficiencies may accelerate the progression of infection to AIDS. This effect was especially noticed in a disadvantaged environment. Many health professionals believe that taking a multivitamin and mineral supplement daily can benefit people with HIV, especially if the diet is deficient.

All people infected with HIV should be monitored for their sex hormone levels. In case of deficiency, hormone replacement therapy can be undertaken. In men, for example, hormone therapy can help maintain muscle mass or restore libido.

Some people take marijuana ( Cannabis sativa ) to stimulate their appetite . Indeed, in Canada and the United States, Dronabinol (Prescription Synthetic THC) is approved to stimulate appetite for anorexia in people with AIDS. This medicine is obtained by prescription.