Like all rheumatism , it results in pain and loss of flexibility of the joints. The most characteristic sign of ankylosing spondylitis (AS) is pain in the lower spine at the sacroiliac joints (where the spine attaches to the pelvis).

However, the disease can also affect other joints, such as ankles or knees. It can also be accompanied by inflammation of the eye or digestive symptoms.

It is a chronic and progressive disease , which leads to a progressive stiffness (rigidity) of the joints, hence the term “ankylosing”. Over time, the vertebrae can even weld together, causing stiffness in the spine. However, with early treatment, it is possible to effectively control symptoms and limit ankylosis. Today, severe forms of spondyloarthritis with ankylosis are increasingly rare and specialists tend to no longer use the term “ankylosing”.

The ankylosing spondylitis is a relatively rare disease that mainly affects young men , also in good health. The exact prevalence is unknown but most studies estimate it affects 1 in 500 to 1 in 100. The disease is very common in some Amerindian populations.
According to the Canadian Arthritis Society, an estimated 150,000 to 300,000 Canadians have ankylosing spondylitis.
The disease is about 3 times more common in men than in women.

The exact cause of ankylosing spondylitis is not known. It is an inflammatory disease , that is, it induces a chronic inflammation of the joints. The disease is probably linked to a set of genetic and environmental factors:

Although symptoms may occur periodically, the disease tends to progress continuously as inflammation persists and continues to damage the joints and cartilage (discs) of the back. Over time, vertebral fusion may develop in some patients. However, the evolution of the disease is very slow, over several years.

Symptoms usually begin at the end of growth (15-16 years) at age 40. There are, however, more rare forms occurring in childhood.

The Ankylosing spondylitis is a disease that develops in spurts, interspersed with periods where the symptoms are less pronounced, and sometimes disappear. However, even in the case of total remission, relapses are extremely frequent.

The disease can sometimes only result in pain and stiffness in the back . Other symptoms may be present depending on the case: 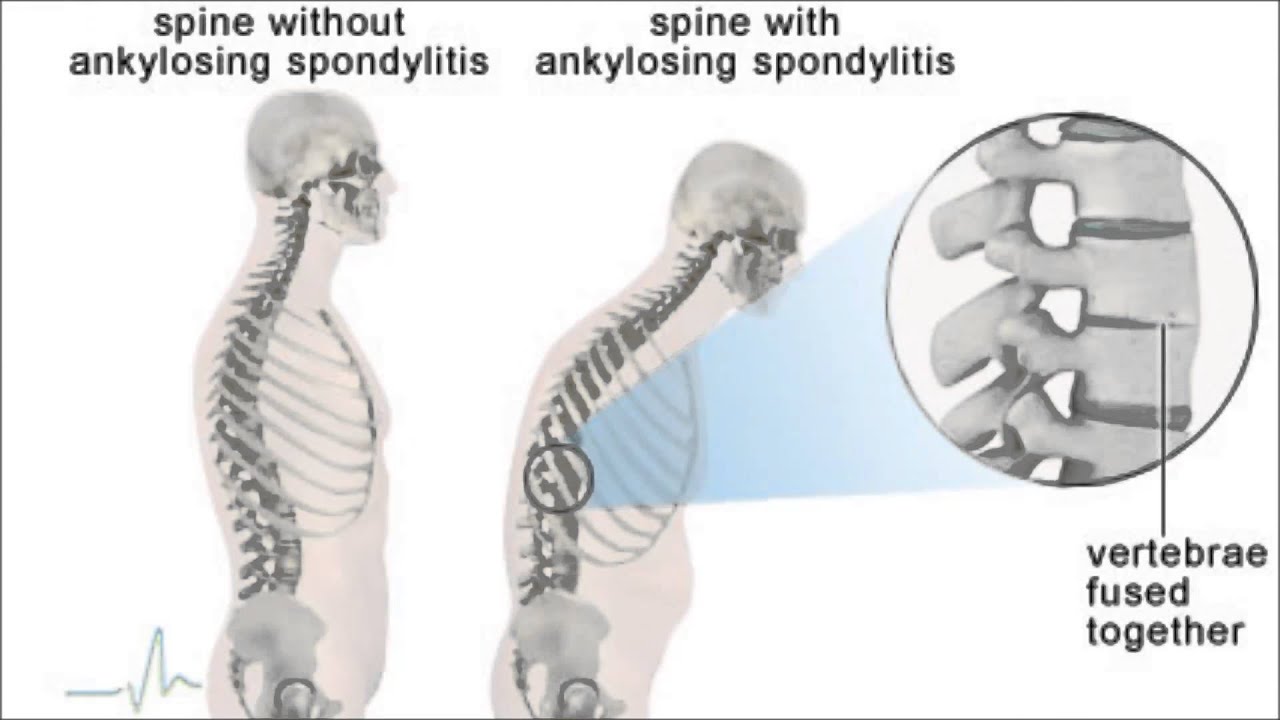 People at risk for Ankylosing spondylitis

In addition to sex (men are more affected than women);genetic predisposition plays an important role.
Thus, a person whose brother or sister suffers from ankylosing spondylitis is 50 times more likely to develop the disease as her.

There is no known risk factor for this disease.

There is no cure for the disease. However, many medications can control symptoms , decreasing inflammation and pain.

As ankylosing spondylitis evolves in flares, some people will only need temporary treatment during painful periods.
Other people, on the other hand, will suffer from a more active form of the disease, with a higher risk of ankylosis. In these cases, long-term treatment , called background therapy , may be necessary. Often, unfortunately, the symptoms may reappear when the treatment is stopped.

However, thanks to current treatments, the majority of people with ankylosing spondylitis can lead a normal life.

Nonsteroidal anti-inflammatory drugs (NSAIDs). NSAIDs are the basic treatment for spondyloarthritis. They help reduce pain and inflammation. They include acetylsalicylic acid (Aspirine), ibuprofen (Motrin, Advil, etc.) but also more powerful drugs such as naproxen (Naprosyne), diclofenac (Voltarene), piroxicam (Feldene)or sulindac (Clinoril), which should be prescribed by the doctor. NSAID treatment is usually prescribed until joint pain and stiffness fade, sometimes for several weeks.

Injections of corticosteroids . In case of severe pain, the doctor may inject corticosteroids (cortisone) directly into the painful joints. These are powerful anti-inflammatories that provide short-term relief.

When NSAIDs are not enough to alleviate symptoms, a background treatment may be prescribed. The arrival of recent treatments called biological treatments (or anti-TNF-alpha) has significantly improved the management of severe cases of spondyloarthritis.

Sulfasalazine . This medication is sometimes used when the joints of the limbs are affected, but it is not very effective against the pains of the spine. Methotrexate can also be used, but these 2 drugs can cause serious side effects, especially in the blood and liver.

The anti-TNF alpha drugs . The anti-TNF (Tumor Necrosis Factor) alpha, also known as biological response modifiers, are recent drugs widely used for the treatment of inflammatory rheumatism. In case of ankylosing spondylitis, etanercept (Enbrel) and infliximab (Remicade) are commonly prescribed. They can quickly reduce morning pain and stiffness and reduce inflammation. These treatments, however, are very expensive and are only prescribed in case of failure of conventional treatments.

Physical exercise is an important aspect of treatment because it helps maintain good posture and increase breathing capacity. However, avoid all exercises that require special effort of the spine, as well as contact sports. The swimming and some stretching exercises that strengthen the back and abdomen are particularly beneficial.
It is advisable to consult a physiotherapist to set up with him a program of exercises adapted to your pain and joint stiffness. Muscle strengthening exercises, especially those that strengthen the back, are also beneficial for maintaining good posture.

In severe ankylosing spondylitis, where joints are severely damaged, surgery may be required. It makes it possible to replace the damaged joint, most often the articulation of the hip, with prosthesis. This intervention helps to restore mobility and reduce pain.