The benign prostatic hyperplasia is characterized by an increase in the size of the prostate. A large prostate compresses the urethra while putting pressure on the bladder, resulting in a frequent need for urination and various urination problems , as appropriate (lower and intermittent flow, pain, etc.).

Almost all men are prone to benign prostatic hypertrophy as they get older. Indeed, more than 50% of men aged 60 are affected, and 90% of those over 80 years. However, not everyone suffers: about 1 out of every 2 men is bothered by urinary symptoms.

This condition is not cancerous . It does not increase the risk of prostate cancer, but does not prevent its development.

The causes of benign prostatic hypertrophy are not clearly identified . There is probably a hereditary predisposition because some families are more affected than others. However, other factors come into play. For example, testosterone and its active derivative, dihydrotestosterone, are known to play an important role. Also, estrogen, female sex hormones present in small amounts in humans, may be involved. For the moment, we do not know the exact mechanisms by which they act. It is possible that with age, the prostate becomes more sensitive to these hormones.

Men with benign prostatic hypertrophy are more likely to experience one or more of the following problems. However, the majority of them do not suffer.

It is important to consult a doctor in case of symptoms . This reduces the risk of severe complications. However, you should know that there is not always a relationship between the symptoms experienced and the volume of the prostate . Indeed, some men have a large prostate without symptoms, while others have a smaller prostate.

With a rectal examination , the doctor can detect an enlarged prostate and follow the evolution. This test is also used to detect the presence of nodules in the prostate and to assess the risk of cancer. A urine test and a blood test to measure prostate specific antigen (PSA) level may be performed as appropriate.

Some factors are suspected to increase the risk of benign prostatic hypertrophy , but none has yet been officially established. 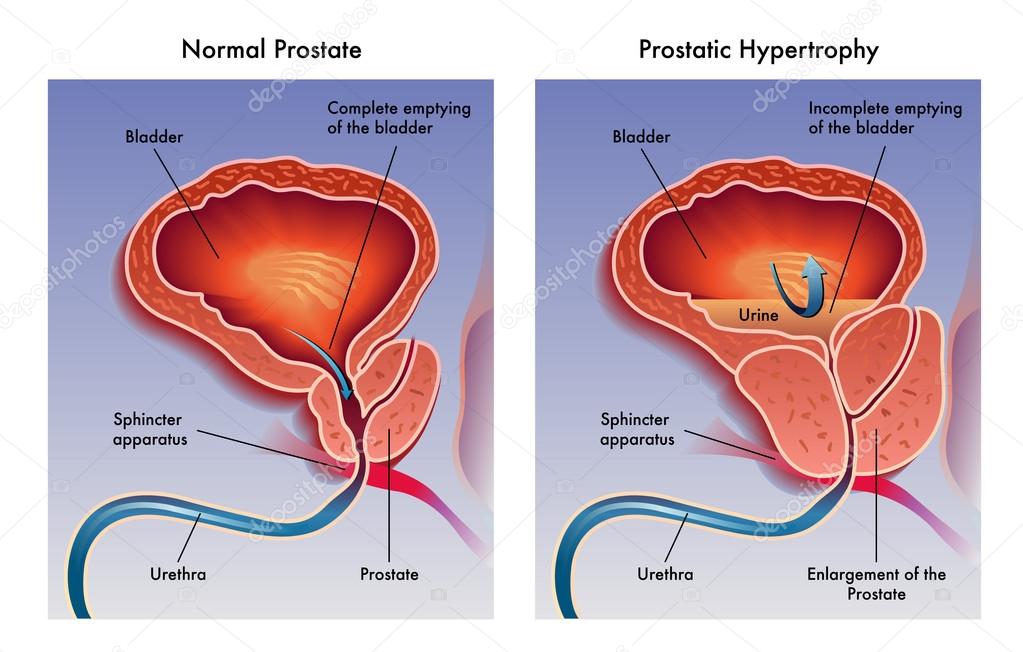 Occasionally, mild, stable symptoms are only clinically monitored at the time of the annual medical examination.

Alpha. Alphablockers contribute to the relaxation of smooth muscle fibers of the prostate and bladder neck. The emptying of the bladder at each urination is then better, which reduces the frequent urge to urinate. The alphablocker family includes tamsulosin (Flomax), terazosin (Hytrin), doxazosin (Cardura) and alfuzosin (Xatral). Their degree of effectiveness is comparable. The benefits are felt quickly, after 1 or 2 days of treatment. Some of these drugs were initially used to treat hypertension, but tamsulosin and alfuzosin specifically treat benign prostatic hypertrophy.

Inhibitors of 5-alpha-reductase. These types of drugs, including finasteride (Proscar) and dutasteride (Avodart) are part of it, reduce the production of dihydrotestosterone. 5-alpha-reductase is a hormone that converts testosterone into its active metabolite, dihydrotestosterone. The maximum effectiveness of the treatment is observed from 3 to 6 months after the beginning of the medication. A decrease in prostate volume of about 25 to 30% is observed. These drugs cause erectile dysfunction in about 4% of men who take them. Increasingly, they are used in conjunction with alphablockers.
Note. Finasteride significantly reduces the risk of developing prostate cancer, according to a large study conducted in 2003 (the Prostate Cancer Prevention Trial). Paradoxically, in this study, researchers noted an association between taking finasteride and slightly more frequent detection of a serious form of prostate cancer. The hypothesis that finasteride increases the risk of serious prostate cancer has since been refuted. It is now known that the detection of this form of cancer has been facilitated by the fact that the volume of the prostate has decreased. A smaller prostate helps to detect tumors. 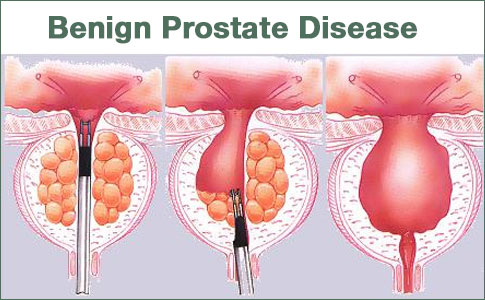 Important. Make sure that the doctor who interprets the blood test for the prostate antigenSpecifically (APS) is aware of finasteride treatment, which lowers PSA levels. To learn more about this screening test, see our Prostate Cancer fact sheet.

Combined therapy. Treatment consists of taking an alphablocker and a 5-alpha-reductase inhibitor at the same time. The combination of the two types of drugs would be more effective than one of them to slow the progression of the disease and improve its symptoms.

If drug treatments do not provide improvements, surgical treatment may be considered. From the age of 60, 10 to 30% of patients resort to surgical treatment to relieve the symptoms of benign prostatic hypertrophy. Surgery may be required in case of complications.

Transurethral resection of the prostate or TURP . This is the most frequently performed intervention because of its good effectiveness. An endoscopic instrument is inserted into the urethra to the bladder. It helps to heal the hyperplastic parts of the prostate. This operation can also be performed using a laser.
Nearly 80% of men who undergo this procedure have a retrograde ejaculation  : instead of being ejaculated, sperm is directed into the bladder. Erectile functions remain normal.

Note. In addition to TURP, other, less invasive methods can destroy excess prostatic tissue: microwaves (TUMT), radio frequencies (TUNA) or ultrasound. The choice of the method depends inter alia on the amount of tissue to be removed. Sometimes thin tubes are placed in the urethra to keep this duct open. The operation is done under regional or general anesthesia, and lasts about 90 minutes. Between 10% and 15% of operated patients may have a second surgery within 10 years of surgery.

Transurethral incision of the prostate or ITUP. The procedure indicated for mild hypertrophy is to widen the urethra by making small incisions in the bladder neck, instead of reducing the size of the prostate. This operation improves urination. It carries little risk of complications. Its long-term effectiveness remains to be proven.

Open surgery. When the volume of the prostate is large (80 to 100 g) or if complications require it (recurring periods of urine retention, kidney damage, etc.), open surgery may be indicated. This common surgical procedure is done under anesthesia and involves incising the lower part of the abdomen to remove part of the prostate gland. This procedure can cause retrograde ejaculation, as is the case with transurethral resection. Another possible side effect of the operation is urinary incontinence.