The carpal tunnel syndrome is manifested by numbness and tingling in the fingers, and a loss of muscle strength in the wrist and hand affected.

The carpal tunnel syndrome affects about 11% of women and 3.5% of men 15. It tends to appear either in the early fifties, or past the age of 75 years. The symptoms are initially light and transient, and then intensify with time. The origin of the carpal tunnel syndrome is often multifactorial. The risk is higher for workersexposed to the following situations.

For the moment, it is not known if computer work can contribute to the problem. Indeed, studies to date have not established a clear link between regular keyboard use and carpal tunnel syndrome. However, frequent use of the mouse (more than 20 hours per week) increases the risk, according to a study.

Other possible causes include wrist injuries, wrist arthritis, and neurological damage as a result of diabetes.

The duration of symptoms varies depending on the cause. Carpal tunnel syndrome can usually be effectively treated without a permanent decrease in the volume of the muscles of the hand (atrophy).

Researchers have observed, in a study, that in a third of cases, carpal tunnel syndrome disappears spontaneously without treatment.

If the symptoms are not relieved by the usual treatments, surgery may be considered.

Often, the symptoms get worse: 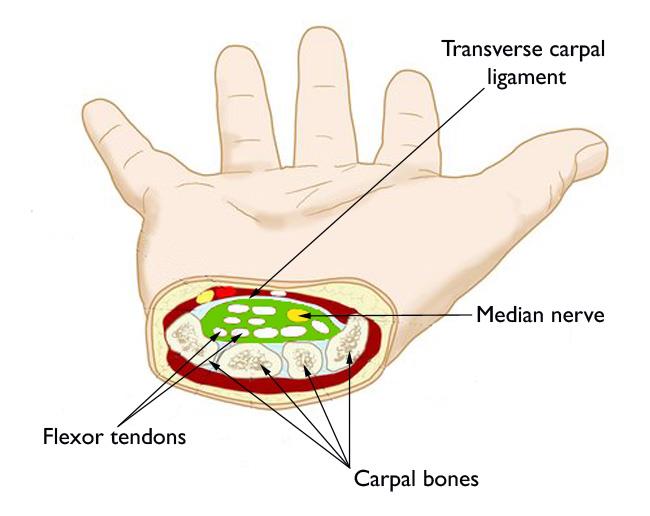 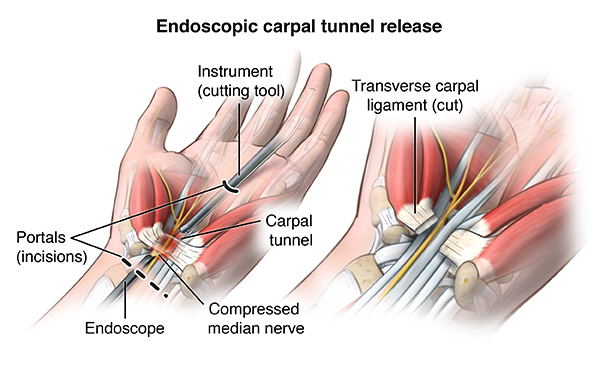 The electromyogram (EMG) is sometimes used to confirm the diagnosis when symptoms are not typical or prior to surgery. This is an examination done by a neurologist that measures the speed of nerve conduction in the wrist. This examination makes it possible to know if it is the median nerve that is affected, and to what degree.

We must first treat any illness or injury that could be the cause of the syndrome. Wrist and hand pain usually disappear as soon as you treat, for example, the hypothyroidism that caused them.

In the absence of an injury or other associated disease, the treatment consists first of resting the affected wrist by interrupting the repetitive activity that causes it or by changing the pace and intensity.

The doctor sometimes suggests wearing a splint during the night. The splint prevents bending the wrist and thus compressing the median nerve while sleeping.

Apply ice where the pain is felt, for 10 to 12 minutes, a few times during the day. The application of heat can also help to calm the pain in the immediate future. It is also advisable to perform contrast hydrotherapy once a day: immerse the hand and wrist for 3 minutes in a bowl of hot water, then for 30 seconds in cold water. Repeat the exercise 3 times in a row.

If necessary, analgesic drugs (acetaminophen) or anti-inflammatories (aspirin, Advil, Motrin, etc.) can sometimes relieve pain, but are generally not very effective for this type of condition. Note that anti-inflammatories do not accelerate healing.

In more serious cases, the doctor may suggest a cortisone injection at the entrance of the carpal tunnel. This treatment provides relief for 3 months, on average.

If the above means are not enough to remove the symptoms, a physiotherapy program could be beneficial, although its effectiveness has not been clearly demonstrated. The purpose of the treatment is to decrease the inflammatory reaction in the tissues surrounding the median nerve and to strengthen the muscles of the wrist and hand joints.

If the pain persists after several months of treatment and the work is at risk of recurrence, surgery may be considered followed by physiotherapy. Surgery involves cutting the ligamentthat is squeezing the median nerve.

Surgery can be performed by incision of about 5 cm (2 in) on the wrist or endoscopy , with 2 small incisions (one is used to introduce a tube with a tiny camera and the other, the surgical instrument).

A lasting relief of pain, numbness and tingling occurs in the vast majority of people so treated. There are some risks, however, such as damage to the nerve either temporarily (1 in 100) or permanently (1 in 1,000).