The chicken pox is a highly contagious disease caused by the varicella-zoster virus (VZV), transmitted through direct contact with the blisters of an infected person or through the respiratory tract.

It causes epidemics, which in temperate countries generally occur in late winter and early spring.

The contagious period starts 24 to 48 hours before the first pimples appear and lasts about a week until the blisters are dry and crust. Because of the contagion, it is sometimes necessary to keep the child at home, according to the policy of the school or daycare he attends.

In general, people who have had chickenpox during their childhood have made antibodies that protect them against this disease for the rest of their lives. However, the varicella zoster virus is not completely eliminated from the body. Indeed, he takes refuge in the nerves, where he goes dormant. At this point, he is out of reach of the immune system. But under certain conditions, it can reactivate, migrate along the nerves to the skin, and then cause shingles.

In most cases, chickenpox is a mild disease. The most common complication is an infection of skin lesions by bacteria, called bacterial superinfection, which can occur when the child is scratching, for example. It is generally not serious, except in the rare cases where the infection is caused by a bacterium of the genus Streptococcus.

Babies, pregnant women and people with weakened immune systems may have more serious complications if they develop chickenpox, such as pneumonia or, in rare cases, encephalitis. In addition, in pregnant women, if chickenpox occurs for example during the first 4 months of pregnancy, it can cause malformations in the fetus (in 1% to 2% of cases).

In someone who has been in contact with the virus, symptoms usually appear within 14 to 16 days of infection.

After a few days, as they appear, the blisters dry and form a crust. At this point, they are no longer contagious.

People at risk for Chickenpox

Varicella can be contracted at any age, but 90% of cases occur before the age of 10. 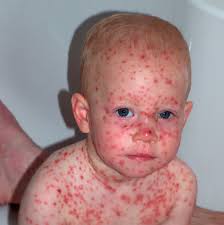 The treatment of chickenpox

Treatment of chickenpox in children under 12 years

In adults and children over 12 years

For some people, chickenpox is more likely to cause complications. The “at risk” who have been exposed to the chickenpox virus (contact with a contagious person or direct contact with lesions of chickenpox or shingles) may benefit from treatment with antiviral drugs or injection antibodies against the varicella-zoster virus , Varig (VariZIG  in Canada), which helps quickly to fight against the infection as appropriate.