The name ”  chronic obstructive pulmonary disease  ,” or COPD refers to a set of breathing problemssevere and irreversible. The main ones are chronic bronchitis and emphysema. Symptoms rarely begin before middle age.

People with COPD  cough a lot and are easily out of breath. As the disease progresses, daily activities become more difficult. These must be reorganized according to the energy and the breath available.

Long-term smoking is responsible for 80% to 90% of COPD cases. About 1  in 5 smokers develop COPD. Exposure to second-hand smoke and air pollutants can also contribute. Sometimes the cause is unexplained.

Often, one finds characteristics of both chronic bronchitis and emphysema in the same person (see diagram): 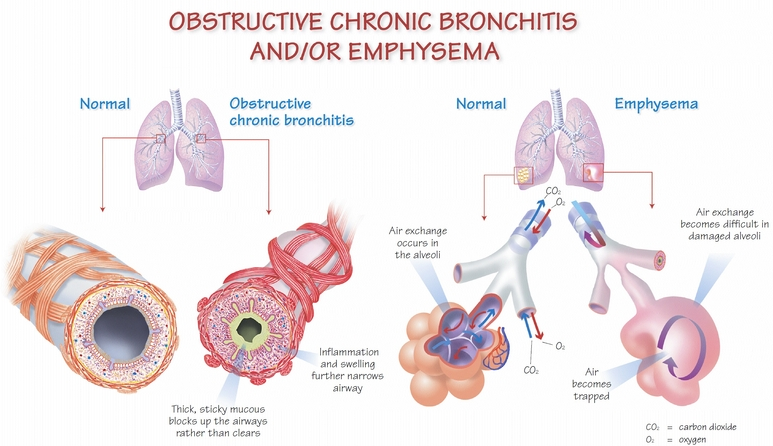 In Canada, COPD is the 4 Th  cause of death after cancer, heart disease and stroke 26 . Experts predict that by 2013, they will appear at 3 Th  leading cause of death. COPD gradually leads to heart failure by overloading the heart, which must propel the blood through the diseased lungs. In smokers , COPD increases the risk of lung cancer.

Currently, chronic bronchitis and emphysema affect both men and women.

Even before the first symptoms appear (cough, usually), lung damage is already well established and irreversible. At this point, stopping exposing one to irritants, such as tobacco smoke, is still very profitable. The progression of the disease is slowed down.

With time, the cough becomes more frequent, as well as colds and acute bronchitis. Sputum is more abundant. The breathing becomes increasingly difficult when significant efforts. The person tends to become more sedentary. At a certain stage, the disease causes shortness of breath at the least physical effort, and then even at rest. Symptoms are exacerbated during periods of smog , normally normal infections or exposure to irritating substances to the respiratory tract. Hospitalization is sometimes necessary.

It is important to treat symptoms of exacerbation of symptoms that may increase the destruction of fragile lung tissue.

Burnout, psychological suffering and isolation are common challenges for people with this debilitating disease. A weight loss may occur in advanced stage of the disease, because the work of breathing is such that it compares to practice an important and constant physical effort.

Currently, physicians are concerned that COPD is often diagnosed too late, limiting the effectiveness of treatment. People at risk for Chronic bronchitis and emphysema (COPD)

There is no cure for chronic bronchitisor emphysema. All the same, it is possible to improve the well-being of the sick person and slow down the progression of his illness.

With smoking cessation and good medical follow-up, if the disease is not too advanced, it may be possible to resume activities previously neglected due to shortness of breath. 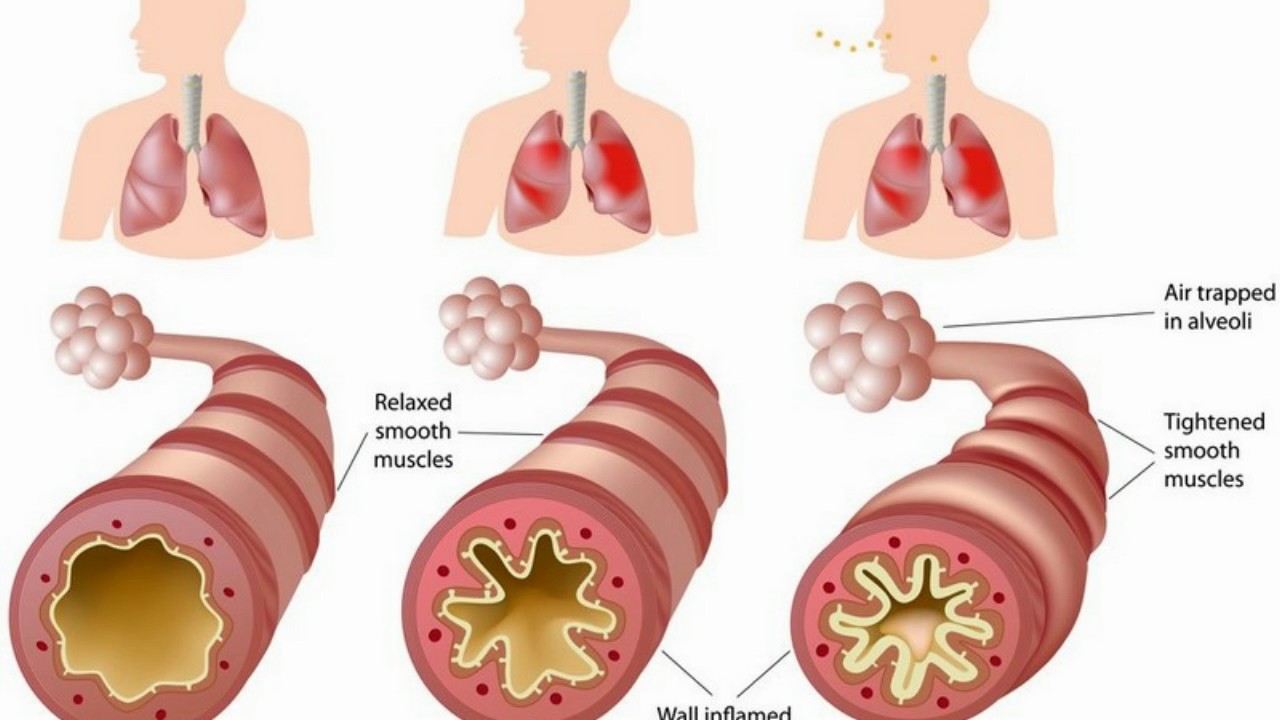 Quitting smoking is the most important and also the most neglected measure. This is the first intervention to be undertaken as soon as possible to improve the quality of life. In smokers, the deterioration of the respiratory capacities is on average 3 to 4 times faster than that observed with the normal aging of the lungs . A person who quits smoking returns to a normal rate of decline.

Many hospitals have specialized COPD clinics or COPD teaching centers (see Sites of Interest). Services may include nutritional counseling, physiotherapy, and occupational therapy, quit support, etc. It teaches you how to become familiar with medication and respiratory rehabilitation exercises. The effectiveness of treatments relies heavily on the involvement of the person with the disease. The medical care is also very important. When the symptoms are exacerbated, it is advisable to see your doctor again.

Bronchodilators . In order to treat shortness of breath , the doctor usually prescribes bronchodilators in the form of inhalers ( pumps ). There are several types, such as beta2-agonists and anticholinergics. Among the beta2-agonists are salbutamol (Ventolin) and terbutaline (Bricanyl), short-acting (4 to 6 hours), and formoterol (Oxeze) and salmeterol (Serevent), long-acting (12 hours). Anticholinergics include ipratropium bromide (Atrovent), with a short-lived effect, and tiotropium (Spiriva), which is taken only once a day. Some inhalers have a quick effect and act in minutes, others take a little longer before acting.

Other bronchodilators are used as tablets , such as xanthines. They are less used than inhalers, but are sometimes used in combination with them.

These medications can cause side effects. For example, Beta-2 agonists sometimes cause tremors and increased heart rate .

Inhibitor of phosphodiesterase type 4 (IPDE-4). A new drug, roflumilast (Daxas), was approved by Health Canada in December 2010 to treat COPD in addition to bronchodilators. It can slightly reduce the number of exacerbations of symptoms. It would act by countering the inflammation present in the bronchi.

Corticosteroids . The corticosteroids are mainly used when the disease is moderate or advanced stage to prevent or treat the periods of exacerbation of symptoms (caused, for example by air pollution or a respiratory infection). They facilitate breathing by reducing inflammation in the airways. They are usually taken in small doses as inhalers on a regular basis (eg Flovent and Pulmicort). Some preparations are combined with a bronchodilator (eg Advair and Symbicor). Inhaled corticosteroids may have side effects, such as a hoarse voice and superinfection throat by mushrooms.

Corticosteroids in the form of tablets may be administered punctually. Prolonged use of oral corticosteroids is not recommended because of their even greater adverse effects (weakening of the bones, increased risk of hypertension and cataracts, etc.).

Antibiotics . The least respiratory tract infection (influenza, acute bronchitis, pneumonia) will be promptly treated, usually with the help of antibiotics and cortisone tablets, to prevent an exacerbation that could lead to a life-threatening emergency. Example of respiratory distress .

Note . Use of long-acting bronchodilators and inhaled corticosteroids has been shown to reduce the frequency of exacerbation attacks in chronic bronchitis.

The respiratory discomfort can lead the sick person to lead a sedentary life, which weaken the entire musculature and increasing breathlessness. A gradual relearning of the physical effort can significantly improve the quality of life . Exercises that work the chest muscles are particularly beneficial. Get advice from a health professional.

In case of acute respiratory distress , oxygen will be used . In addition, long-term oxygen therapy is indicated when the respiratory functions are so deteriorated that the oxygen level in the blood is constantly too low. It is administered daily at home by means of mobile equipment, has the effect of reducing the consequences of respiratory insufficiency on the heart and to bring a better comfort. To be effective, oxygen therapy must be used 16 hours a day.

It is possible to correct some of the deleterious effects of emphysema – induced lung distention by surgically reducing the volume of this organ. Doctors use this practice in an exceptional way.