The term dysmenorrhea refers to menstrual disorders in general (Greek due  = difficulty) but it is commonly used to refer to pain in the lower abdomen that precede or accompany menstruation. They usually last from 2 to 3 days. The term algomenorrhea is more exact, the prefix algos meaning “pain”.

The menstrual pain affects 50% to 80% of fertile women, by age group. Of these, between 5% and 15% of women are sufficiently inconvenienced to have to modify their daily activities (forced rest, absenteeism from school or work).

The menses are often painful to the late teens and in the years before menopause because they are periods of hormonal fluctuations. The pains that occur at these moments of life are generally not worrying and hide no underlying gynecological disorder. In teenage girls, the pain decreases with the years and often disappears after a first pregnancy. When they are very intense and persist after bleeding, these pains can be suggestive of endometriosis. 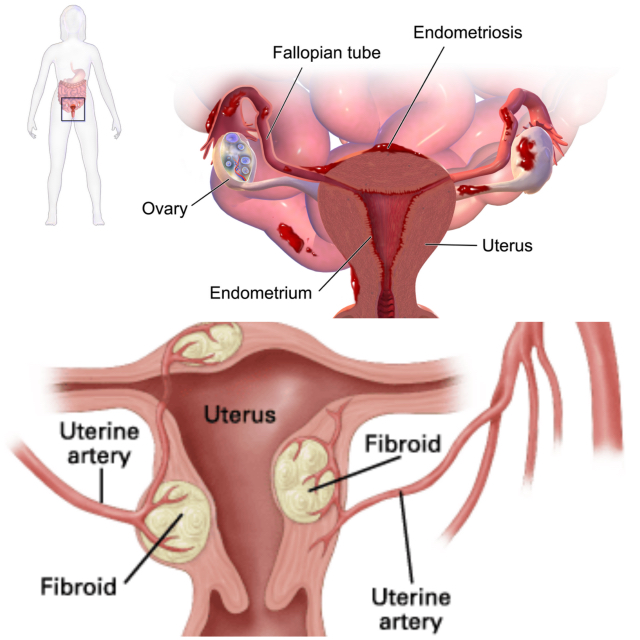 In the vast majority of cases, dysmenorrhea has no other consequence than the inconveniences related to pain. When it is especially intense, repeated and not relieved, it can lead to psychological distress and sometimes even depression.

However, it is important to treat a gynecological disorder that causes dysmenorrhea to prevent it from getting worse.

The symptoms of dysmenorrhea last from 2 to 3 days, on average.

All women can suffer, but the following factors increase the risk:

Some lifestyle habits seem to contribute to menstrual pain:

Although NSAIDs are generally effective, 20% to 25% of women  are not relieved by these drugs.

Oral contraceptives. Symptoms can also be alleviated by taking an oral contraceptive, which prevents ovulation, reduces prostaglandin production and reduces menstrual flow. This method is generally effective in reducing not only the duration and abundance of menstruation but also the pain that accompanies it. Some people also choose to stop menstruating by taking the birth control pill continuously, which solves the pain problem indirectly or by switching to Depo-Provera (an injectable contraceptive that causes amenorrhea).

It is also possible to take contraception containing a progestin alone, continuously. In general, menstrual periods are much less abundant and sometimes stop during treatment, which solves the problem of pain. The menstruation resumes at the end of the treatment.

Contraceptive by injection. Depo-Provera (a contraceptive administered by injection that causes amenorrhea) is also available but it is not devoid of adverse effects: irregular bleeding, weight gain, decreased libido. In addition, these effects cannot be stopped once the substance is administered and one must wait until the end of the efficacy (4 months) to return to normal.

Intrauterine device (IUD ). Another option is to wear the Mirena IUD. It is an intrauterine device containing a progestin. It fits into the uterus. In addition to being contraceptive, it significantly reduces menstruation and pain. It only needs to be changed every 5 years.

In case of dysmenorrhea caused by a gynecological disorder, the doctor will treat the condition causing the pain.