Fabry disease is a hereditary disorder characterized by the accumulation of a particular form of fat called globotriaosylceramide. This fat can accumulate in the cells of the body from childhood, causing atypical symptoms throughout the body.
This is a progressive and multisystemic lysosomal pathology, a pathology that affects structural elements involved in cellular metabolism. The associated clinical lesions are renal, cardiovascular, cerebrovascular or vestibular (associated with hearing).

The characteristic signs of the disease are episodes of pain in the hands and feet (acroparesthesia), small red spots in the skin (angiokeratomas), a decrease in the ability to sweat (hypohidrosis), visual disturbances (opacity of the cornea), gastro-intestinal symptoms, ringing in the ears (tinnitus) or loss of hearing.

Some affected people have an intermediate form of the disease developing a little later in the life of the subject. This pathological form reaches only the heart and the kidneys.

The prevalence at birth for this disease is 1 / 80,000 (number of cases in a given population at a given time). Moreover, it would appear that this figure is underestimated by scientists.
When the disease develops later, this prevalence increases to 1/3000.

Fabry disease is determined by a broad spectrum of characteristic symptoms ranging from benign cases for heterozygous women (with two different alleles for the gene of interest) to more severe cases for homozygous boys (with two identical alleles for the disease). gene of interest). Nevertheless, patients suffering from this pathology may all have neurological, cutaneous (angiokeratomas), renal (proteinuria, renal anomalies, etc.), cardiovascular (cardiomyopathies, arhytmia, etc.), cochleobuccal (auditory deficiencies), and / or cerebrovascular (ischemia, heart attack, etc.).

The symptoms of Fabry disease can range from mild to severe severity. Pain is the most important clinical manifestation in this pathology. It is a chronic pain characterized by burning sensations, tingling, or by episodic attacks of intense burns. These pains can decrease towards the adulthood. In addition, anhidrosis or hypohidrosis (absence or weakening of perspiration) may appear causing intolerance to heat and exercise.
Other signs are also typical of the disease, such as:
– angiokeratoma: reddish skin lesions;
– changes in the cornea of ​​the eye;
– persistent fatigue;
– cardiac and cardiovascular abnormalities;
– dyspnea: respiratory gene resulting in shortness of breath;
– nephropathy: a disease that affects the renal system.

The symptoms of the disease can be divided into two categories: mild symptoms and more severe symptoms. The first form affects more generally patients with this pathology and develops in childhood or adolescence. The second is less common and appears more generally in adulthood or old age (between 50 and 80 years).

With regard to the more serious form of the disease, the associated symptoms are, this time, heart attacks (ventricular hypertrophy, cardiomegaly, ischemia, arrhythmia, etc.). In addition, kidney damage is often associated, resulting in almost 10% of cases, kidney dialysis or transplantation.

Fabry disease is an inherited genetic disease caused by mutations in the GLA gene. This gene of interest allows the production of an enzyme: alpha-galactosidase A. The latter has an important role within lysosomes, internal structures allowing, among other things, to ensure cellular metabolism.
In a healthy organism, the correct functioning of the alpha-galactosidase An enzyme allows the body to cope with the fatty substances characteristic of Fabry’s disease: globotriaosylceramides.
Mutations in the GLA gene therefore alter the structure and function of this enzyme. As a result, the body is no longer required to fight effectively against globotriaosylceramides. Either these fatty substances accumulate in the constituent cells of the body, particularly in cells lining the wall of blood vessels, skin cells, kidney cells, heart or the nervous system.

The gradual accumulation of these substances within the different cells leads to the development of certain clinical signs.

Certain mutations in the GLA gene may result in the complete absence of alpha-galactosidase A production and thus result in a severe form of Fabry disease. Other mutations can, in turn, lead to a decrease in the biological activity of the enzyme. In the latter case, the development of the disease will be characterized by an intermediate form of Fabry disease, affecting only the heart and kidneys of the individual.

This pathology is the consequence of a genetic anomaly within a gene carried by the X chromosome, sex chromosome determining the sex of the individual. Transmission of the disease is of the “X-linked recessive” type. This sex chromosome is worn in one copy by boys (XY) and in two copies in girls (XX). In addition, the recessive nature of this mode of transmission of the disease reflects the fact that the presence of the two copies of the mutated allele for the gene of interest is necessary for the development of the associated phenotype.

Prevention and treatment of Fabry’s disease

The differential diagnosis of Fabry disease is based on the development of characteristic symptoms in the patient. In addition, a blood test allows the analysis of the enzymatic activity of the enzyme alpha-galactosidase A.

The diagnosis of Fabry disease is also based on: 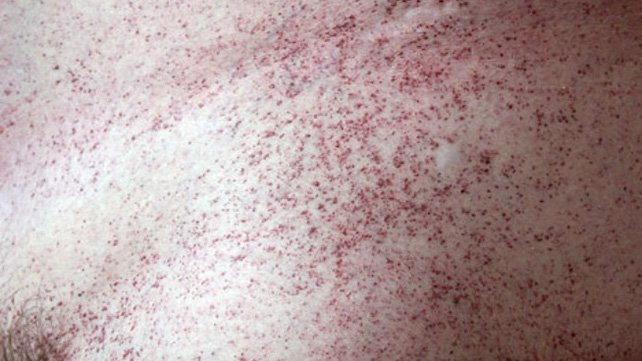 Laboratory diagnostic tests involve enzymatic labeling. The enzymatic analysis then makes it possible to demonstrate the deficient operation or the absence of functioning of the enzyme alpha-galactosidase A.

The usual treatments for Fabry disease are based on the use of pain relievers (analgesics), drugs to treat kidney damage (angiotensin, etc.), antiarrhythmics, pace-makers, and implantation. cardiac defibrillators, on dialysis or kidney transplantation.
Patients with a severe form of the disease may benefit from drugs such as carbamazepines or diphenylhydantoins. These types of treatments are often taken daily to prevent and reduce pain and reduce the risk of developing more severe symptoms (heart and / or kidney)

Specific treatment of the disease on enzymatic replacement is currently relevant in research related to the disease. Indeed, the in vitro synthesis of the enzyme alpha-galactosidase A allows the replacement of the enzyme deficient or absent in the patient. This treatment is not yet established for the sick individuals but the research is promising.

The risk that the disease affects vital organs increases with the age of the individual. The final stage of the disease with respect to renal and cardiovascular involvement restricts the life expectancy of the person.

There is also a need for prevention in people with Fabry disease. Indeed, it is advised to the affected people to avoid the situations of stress, the prolonged and repeated exposures to the sun or to the heat, to the changes of temperatures or to avoid the intense physical exercises.