Fat cough, also called productive cough, is manifested by the presence of sputum, or consecutive sputum, from the throat or lungs, as opposed to the dry, so-called “nonproductive” cough.

Comprised of water, mucus, and often bacteria, viruses and white blood cells, these secretions are a more or less thick liquid that can be expelled through the mouth during cough in the form of mucus and sputum.

It differs in this from dry cough, characterized by the absence of secretions and often related to irritation of the respiratory tract. 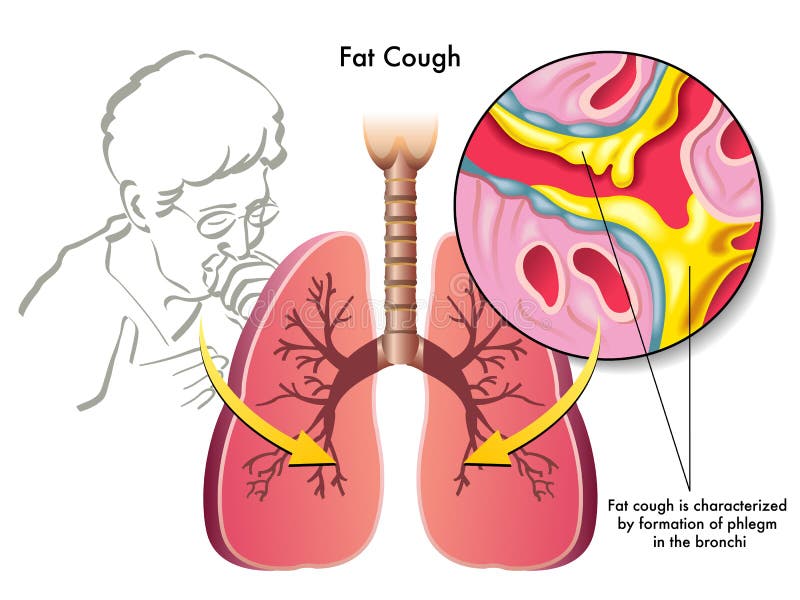 Characteristics and causes of fat cough

Fatty cough is not a disease but a symptom: it is usually present in case of bronchial infection or chronic obstructive bronchitis of various causes such as those related to smoking. The bronchi produce secretions which, thanks to the cough, make it possible to evacuate these secretions loaded with microbes, pus, or fine particles.

We must not seek to stop the production of this mucus, which is a natural defense mechanism of the body and whose purpose is to clean the lungs: this is called sputum.

As an indispensable defense mechanism, it is important to respect the fat cough and not necessarily seek to stop it.

It is therefore not recommended to take anti-cough medicine ( cough), these blocking the reflex cough, they can cause an accumulation of mucus in the bronchial tubes and lungs, which may further clog the airways. In general, the treatment of fatty cough varies according to the cause and the origin of the disease is treated. The treatments are simply to promote the expectoration of pulmonary mucus.

Should we use bronchial fluidifiers?

The fluidifiers have no other efficacy than placebo. As they have adverse effects, sometimes serious (allergies, respiratory disorders), they are prohibited in children under 2 years. Their use is also not justified in children and adults.

The treatment of fatty cough consists of:

Greasy cough: when to consult?

If the fat cough is generally benign, it can also reveal more serious pathologies (chronic bronchitis, important bacterial infection, pneumonia, pulmonary edema, tuberculosis, asthma …). In cases of prolonged fat cough, purulent appearance of secretions or cough accompanied by blood, vomiting, or fever, significant fatigue, it is important to consult a doctor as soon as possible.

How to prevent oily cough?

One cannot prevent cough itself, only prevent the diseases associated with the symptom, such as respiratory infections.
It should, for example:

Homeopathy offers for example treatments such as 3 granules three times a day in 9 CH:

Essential oils (HE) used to fight against fatty cough are:

To fight against the fat cough, make an herbal tea:

Drink the chosen preparation at least three times a day.