The gastroesophageal refluxmeans the rise of part of the stomach contents into the esophagus (the tube connecting the mouth to the stomach). The stomach produces gastric juices, very acidic substances that help the digestion of food. However, the wall of the esophagus is not designed to resist the acidity of the contents of the stomach. Reflux causes inflammation of the esophagus, which results in burning and irritation. Over time, this can lead to damage to the esophagus. Note that a low level of reflux is normal and of no consequence, and one speaks then of physiological (normal) reflux.

In most people with reflux, reflux is caused by poor functioning of the lower esophageal sphincter. This sphincter is a muscular ring located at the junction of the esophagus and stomach. Normally, it is tight, preventing the contents of the stomach from reaching the esophagus, opening only to let the food ingested and thereby acting as a protective valve.

In case of reflux, the sphincter opens at the wrong time and lets up the gastric juices of the stomach. People who suffer from reflux often have acid regurgitation after a meal or during the night. This phenomenon of regurgitation is very common in infants because their sphincter is immature.

Gastroesophageal reflux may also be related to hiatal hernia . In this case, the upper part of the stomach (located at the junction of the esophagus) “goes up” with the esophagus into the rib cage through the orifice of the diaphragm (the hiatal orifice).

In Canada, an estimated 10 to 30% of the population would be exposed by occasional episodes of reflux oesophagitis. And 4% of Canadians would have a daily reflux of 30% once a week (13).
An American study shows that 44% of people have gastroesophageal reflux at least once a month.
Regurgitations are extremely common in infants, but they are not consistently attributable to gastroesophageal reflux. Experts estimate that 25% of infants have real ebb. It peaks around the age of 4 months.

In the majority of adults with the disease, reflux symptoms are chronic. The treatments most often offer complete relief, but temporary, symptoms. They do not cure the disease.

In infants, reflux usually disappears between 6 and 12 months of age as the child grows older.

Prolonged exposure of the esophagus to acidic gastric substances may cause:

In each of the situations below, it is advisable to consult a doctor .

The main symptoms appear especially after meals or while lying down:

In infants, the symptoms of reflux are as follows:

Alarming symptoms lead to consult a doctor immediately as they may be signs of a complication or another disease.

The case of atypical symptoms

Smoking (cigarettes, cigars, and pipes) increases the risk of gastro-esophageal reflux. Stopping smoking, with other lifestyle measures, may help to reduce symptoms. 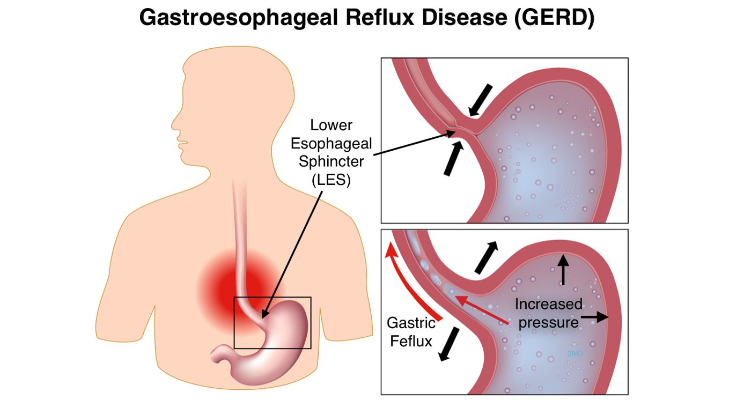 In the presence of signs suggestive of reflux, the doctor may do what is called a “presumptive” diagnosis. He believes that this person probably has a reflux (without total certainty). Given the frequency of gastro-oesophageal reflux, this presumption authorizes the doctor to prescribe a “test treatment” by drugs, and diet and dietary instructions, hereinafter cited.

If there is no improvement in the symptoms under treatment, it may be something other than reflux. It is therefore important to see a gastroenterologist on the advice of the attending physician, for the realization of a “high endoscopy” or ”  Fibroscopy  ” after stopping treatment.

This allows you to see the lining of the esophagus and stomach and need to take samples. The specialist sometimes detects an “eosinophilic esophagitis”, inflammation of the esophagus not linked to reflux, but to a particular infiltration of white blood cells. Similarly, this examination can quickly detect, seeing them a “peptic esophagitis, stenosis, cancer or endobrachy esophagus.”

Often fibroscopy is normal, and does not confirm the “reflux”

The gastroesophageal reflux will be authenticated by an examination called pHmetry which quantifies the existence or not of reflux by 24 hours by measuring the degree of acidity of the esophagus. This examination involves introducing a probe, through the nose, into the esophagus. On the probe, sensors collect the pH of the esophagus, and can differentiate the pathological reflux, normal. It must be done 7 days after taking any proton pump inhibitor (PPI) type drug so that the results are not affected by the medication.

In case of persistence of symptoms in a person with a history of esophagitis or positive pHmetry without treatment, a “pH-impedancemetry” under treatment can be proposed, which allows to differentiate liquid, gaseous, acidic or nonacid reflux.

Finally, in order to be complete, it is possible to detect motor disorders of oesophageal conduction by the practice of a TOGD: oeso gastro duodenal transit. It allows visualizing the contours of the esophagus and its movements after ingestion of an opaque radio product. It can detect the contours of a hiatal hernia.
Other examinations, the manometry and the “high resolution manometry” make it possible to analyze, by sensors intra oesophageal, the motricity of the esophagus.

Some people have a functional disorder, a visceral hypersensitivity (the mucosa of their esophagus is sensitive): they find a normal endoscopy, a normal acid exposure (pHmetry), a total number of physiological reflux, normal, but a concordance between the symptoms and reflux under impedancemetry.

Whether you take a medicine against gastro-oesophageal reflux or not, it is essential to implement the measures to prevent recurrence listed above and to change certain lifestyle habits. If this is not enough, people with regular reflux can get a simple and effective treatment to relieve their symptoms. However, since reflux is a chronic disease , it is sometimes necessary to continue taking medication in the long term.

Several medications can be given to decrease gastric acidity:

30% to 40% of people with gastro-oesophageal reflux continue to have signs of reflux or to be embarrassed despite well-managed treatment. The majority of PPI-resistant reflux symptoms are secondary to “no pathological reflux”.

Good to know. A vitamin supplement is sometimes recommended by some specialists to people who are on anti-reflux medication to avoid certain deficiencies. According to some, a deficiency of vitamin B12, vitamin C, magnesium, possibly iron, can occur. Indeed, anti-reflux drugs can decrease the absorption of nutrients and some drugs. If you are taking another course, talk to your doctor or pharmacist.

In case of failure of drug treatments, surgery to treat gastroesophageal reflux is possible, but it is reserved for people with serious complications  such as (severe esophagitis not responding to treatment) related to a large Hernia Hiata . It is only very rarely practiced.