Gaucher disease is a genetic disorder affecting many tissues and organs of the body. Clinical manifestations vary enormously from one individual to another. In this sense, several types of Gaucher disease have been described.

Type 1 is the most common form of the disease. This form does not usually affect the brain of the individual or the spinal cord (central nervous system), in this sense it is also called: non-neuronopathic Gaucher disease. The associated symptoms may be mild to severe and may occur throughout the life of the subject (from childhood to adulthood). The most significant clinical signs are: enlargement of the liver and spleen (hepatosplenomegaly), deficiency of red blood cells (anemia), tendency to bruising as a result of a decrease in circulating platelets (thrombocytopenia) , pulmonary abnormalities, bone problems (pain, fractures, etc.) or arthritis. 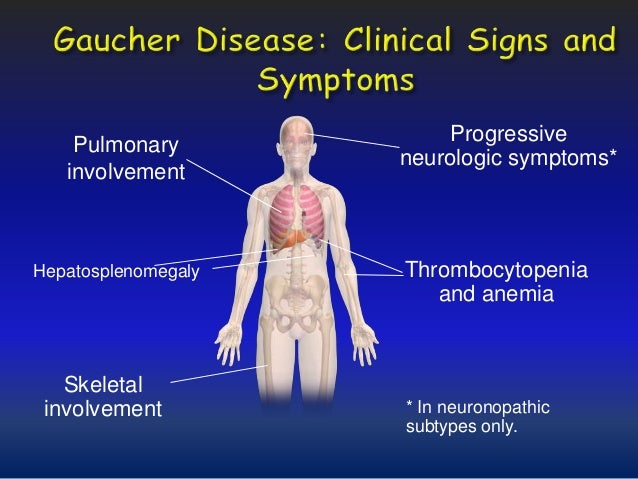 Types 2 and 3 of the disease, meanwhile, correspond to neuronopathic forms. Indeed, in these cases, the central nervous system is affected. Beyond the symptoms associated with the first form of the disease, abnormal movements in the eyes may be significant. Or, neurological crises or brain damage may be visible. Nevertheless, what differentiates type 2 from type 3 is the extent of the disease. In fact, the neurological lesions associated with type 2 are faster than for the third form.

The most severe form of Gaucher disease is called: the perinatal lethal form. Indeed, it causes severe or even fatal complications developing from birth and from early childhood. Features of this severe form of the disease include generalized edema caused by fluid accumulation prior to birth: fecal-placental anasarca. But also dryness and flaking of the skin: ichthyosis, characteristic facial features and significant neurological problems.
The survival rate of a newborn with this form of Gaucher disease is only a few days.

Another form of Gaucher’s disease is defined as: the cardiovascular type. Its name reflects a primary affection of the heart leading to calcification of the heart valves. Patients with this form of the disease may also have eye deficiencies, bone diseases or spleen involvement (splenomegaly).

It is a rare disease whose prevalence (number of cases within a given population, at a given moment) is 1/100 000.

The clinical manifestations associated with Gaucher disease vary greatly from one individual to another and also depend on the form of the pathology.

In addition, the symptoms most often associated with Gaucher disease are: 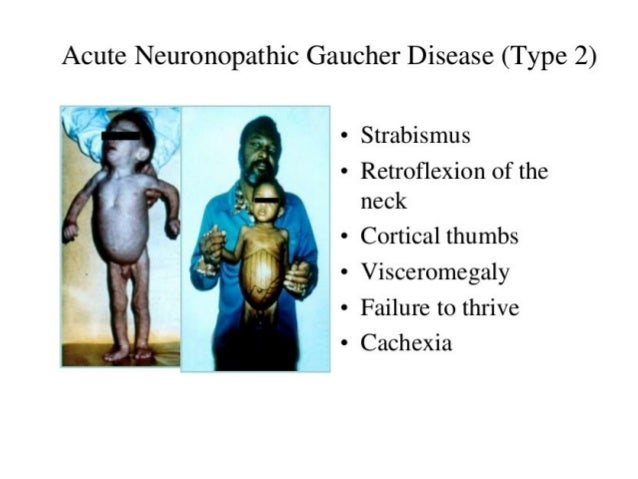 Other symptoms are attributed according to the type of the disease in question. Indeed, unlike type 1, types 2 and 3 cause damage to the central nervous system.
In addition, the cardiovascular form of Gaucher disease also causes heart damage.
Sometimes it is also possible to associate with the disease certain pulmonary diseases.

The atypical symptoms in each of the forms of Gaucher’s disease are:

Studies have also shown that individuals with Gaucher disease as well as healthy carriers (carriers of the mutated gene but not developing the phenotype associated with the disease) have a higher risk of developing Parkinson’s disease.

Gaucher disease is a genetic inherited disease.
Mutations in the GBA gene are at the origin of the pathology.
This GBA gene comes into play in the formation of an enzyme: beta-glucocerebrosidase. The latter allows the destruction of lipid substances called: glucocerebrosides.
The mutations within this GBA gene considerably reduce the enzymatic activity of beta-glucocerebrosidases or even completely prevent it from functioning. In the absence of the enzymatic activity thereof, glucocerebrosides and associated substances can then accumulate within the cells of the body. This abnormal accumulation of lipid substances (fatty substances) within different cells causes damage to tissues and associated organs.

The transmission of Gaucher disease is in the autosomal recessive mode. Either the mutated gene of interest is carried by an autosome: a non-sexual chromosome. In addition, since the transmission is recessive, the individual must have the mutated allele for the gene of interest in duplicate to see the phenotype of the disease develop.
In this sense, each parent must have a copy of the mutated gene to transmit the disease to the offspring.
An individual with only one of two copies of the mutated allele is said to be a healthy carrier of the disease. Either it does not develop the phenotype of the disease and does not show any physiological signs or symptoms characteristic of Gaucher disease.

The disease being a genetic inherited disease, the transmission of it is done to the descendants.
The mode of transmission of Gaucher disease is autosomal recessive, which concerns an autosome (non-sexual chromosome) and whose arrangement of the two copies of the mutated allele for the gene of interest is necessary for the development of the disease.

In this sense, the risk factors for the development of the disease lie therefore in the carrying of the mutated gene of interest by each parent of the individual in question.

Prevention and treatment of Gaucher disease

The diagnosis of the disease is based on a differential diagnosis associated with the individual’s symptoms as well as on laboratory tests.

The differential diagnosis is therefore based on the development of bone problems as well as enlargement of the liver and spleen (hepatosplenomegaly). As for the blood test, it is possible to determine the possible abnormally low level of red blood cells (anemia) and a too low number of circulating platelets (thrombocytopenia). A second type of laboratory test corresponds to a DNA test. This one makes it possible to highlight the possible mutations within the gene GBA.
These two laboratory tests: the blood test and the DNA test can be prenatal.

Biopsy of the bone marrow or liver may be necessary in making the diagnosis.

The treatment of Gaucher disease is the administration of a modified form of the enzyme, glucocerbrosidase, by intravenous injection every two weeks. This therapeutic means makes it possible to stop the progression of the disease and allows, in certain cases, to limit the associated symptoms. Nevertheless, this treatment does not allow acting on the evolution of the neurological consequences that causes Gaucher disease.

Many other therapeutic means include oral treatments acting at different stages of the disease’s development.