The Glaucoma is an eye disease that causes irreversible reduction of vision. It is the consequence of damage to the optic nerve. It is primarily the peripheral vision that is affected (see images below). The sufferer can become blind if he does not receive any treatment. Glaucoma is also the cause of blindness in the world in the least developed countries in the world after cataract (source OPC 2012).

Most often, glaucoma is associated with subsequent elevation of pressure inside the eye (intraocular pressure). Normally, this should not exceed 21 millimeters of mercury (mmHg).

However, it is found that in nearly 1 in 3 people, glaucoma symptoms occur even if the pressure in the eye is normal. A less good blood supply to the optic nerve, caused by atherosclerosis in the vessels that irrigate this nerve, could be involved. Whether the pressure inside the eye is too high or not, the treatment remains the same.

In France, more than one million people would be affected, including 400,000 people who are not treated by ignorance of the disease. The over 40s are mainly concerned, glaucoma can nevertheless occur at any age.

It is often not known why glaucoma appears. The heredity is the main risk factor. In addition, certain anatomical features may play a role.

Sometimes glaucoma is associated with a specific problem, such as:
– a sudden trauma to the eye;
– another problem of sight: cataract, pronounced myopia, chronic uveitis ;
– certain diseases: diabetes, hypertension, cardiovascular disorders, and uncontrolled hypothyroidism.

Taking certain medications also increases the risk of glaucoma. This is the case, for example, corticosteroids administered directly in the eyes or orally.

Note. Corticosteroids pumped for asthma or cream or ointment for eczema has no effect on glaucoma.

Open angle glaucoma . With 80% to 90% of cases (in Caucasians, Blacks and Hispanics), this type of glaucoma develops slowly without causing symptoms, over a period of time ranging from 10 years to 20 years. The “angle” in question is that formed by the junction between the iris and the cornea. It is called the iridocorneal angle (see the interactive diagram). Usually both eyes are affected. One of the important precursors is the gradual increase in pressure inside the eye. Normally, this should not exceed 21 millimeters of mercury (mmHg). Intraocular pressure is detectable by visual examination .

Closed angle glaucoma . More rare (except in Asians, where it is common), it occurs as a result of a sudden increase in pressure in the eye. This is a medical emergency . It causes extreme eye pain and other noticeable symptoms, such as vision loss and colored halos around lights. Intraocular pressure sometimes rises up to 80 mmHg. Typically, such fits occur in the evening when the lighting is dim and the pupils dilate. If this type of glaucoma is not treated quickly, the person may become blind. If treated in time, the risk of blindness is greatly reduced. Close-angle glaucoma attacks first and usually only one eye, then the other within 5 years in the absence of adequate control.
Two factors are required for a seizure to occur:
– Anatomical predisposition.
– A dilation of the pupil (the central orifice of the iris, where the light rays pass). It can occur as a result of prolonged darkness, stress, or the use of drugs that dilate the pupil, such as antispasmodics, antihistamines, antidepressants, and nitrates.

Congenital glaucoma. It can occur from birth or take a few months to manifest. Most often, it touches both eyes. Sometimes hereditary, it can represent an isolated problem or be explained by an ocular malformation (usually a congenital cataract) or certain rare diseases. In this case too, there is blockage of the exit of the aqueous humor.

Here are the most commonly performed exams.

Tonometry test. This is the first test generally undertaken. The tonometer measures the pressure inside the eye. Two techniques are employed: one directs a jet of pressurized air on the open eye, it is the pulsed air tonometry; or after instillation of anesthetic eyedrops a flattened cone is placed on the cornea, this is the aplanation tonometry. This test is both fast and painless. Normal intraocular pressure is between 8 mmHg and 21 mmHg. 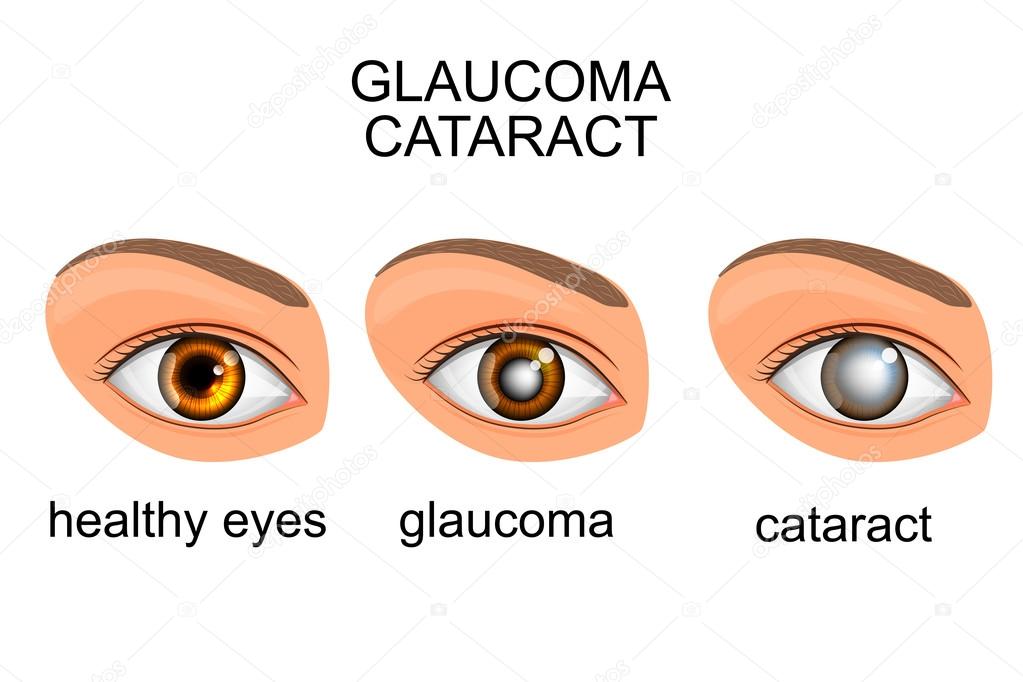 Observation of the eye. Indications of damage to the optic nerve can be seen with a device that directs light into the eye.

Field of vision test. To assess the extent of the visual field, the person is asked to fix a target in the center of an illuminated sphere, then a bright spot appears at different points in the visual field.

The symptoms of glaucoma

Note. Usually both eyes are affected.

Note. A permanent loss of vision can occur in the day following the crisis, hence the importance of getting treatment as quickly as possible. In general, the crisis only reaches one eye.

Note. Symptoms may take a few months after birth to manifest.

People at risk for Glaucoma

Unfortunately, there is no cure . Visual acuity lost due to glaucoma cannot be found. The goal of treatment is to prevent or slow down the subsequent damage . To do this, in many cases, it will be a matter of reducing the pressure inside the eye by improving the circulation of the aqueous humor.

The ophthalmologist , the eye care physician, will develop a treatment plan and monitor visual abilities on a regular basis. Possible interventions include eye drops, oral medications, laser treatment and, if necessary, surgery. In many cases, medications should be taken for life.

If the cause of glaucoma is identifiable, it will be important to treat it. In addition, corticosteroids in the eyes are contraindicated in people with glaucoma. It is therefore advisable not to undertake or stop this type of treatment. In some cases, their use cannot be avoided. It is then necessary to obtain a very good follow-up with an ophthalmologist.

They reduce the pressure in the eye. Drops are frequently prescribed because they cause fewer side effects than oral medications.

Several types of ophthalmic drops are used. Among the most common are beta-blockers , alpha-adrenergic agents , prostaglandin analogues , carbonic anhydrase inhibitors, and miotics . The majority of these drugs work by both reducing the production of aqueous humor in the eye and increasing its excretion.

The side effects vary from one type of drop to another. These may include, for example, dry mouth, low blood pressure, decreased heart rate, eye irritation, redness around the eyes, or fatigue. It is best to inform your doctor of the side effects that occur, if any.

It is important to follow the dosage carefully. This treatment is very effective, provided it is followed daily and for life .

If drops do not sufficiently reduce intraocular pressure, which is rare, oral medication may be prescribed (eg, carbonic anhydrase inhibitors). However, these medications more often cause undesirable and more pronounced effects than ophthalmic drops.

This procedure, called trabeculoplasty , is becoming more commonplace. It even happens that it is proposed before the use of ophthalmic drops. It can also be used if the glaucoma worsens despite treatment or if the medication is poorly tolerated.

This laser treatment aims to help the circulation of the aqueous humor in the eye. The procedure is painless and fast: it is performed in one or two 5-minute sessions. A laser beam is directed at the trabeculum (see diagram of internal structures of the eye above). It is not clear why it decreases the pressure.

Even if a laser intervention is practiced, a drug treatment (most often eye drops) must still be followed for life.

This eye surgery is called trabeculectomy . The intervention aims to create a new escape route from the aqueous humor by removing a small segment of trabecular meshwork. Tube laying is common. The tube directs the aqueous humor into a reservoir behind the eye. About 80% of people who undergo this surgery no longer need eye drops afterwards.

Other types of surgeries are in experimentation . Eventually, they could replace trabeculectomy. However, it will take several more years to determine their effectiveness. Examples include canalostomy, Ex-Press, canaloplasty, gold implant, Glaukos iStent and trabeculotome.

Once the pressure is lowered, the ideal is to open a passageway through the iris, using a laser beam . This procedure is called peripheral iridotomy . This treatment allows the flow of the aqueous humor, in order to avoid recurrences. Anesthetic drops are previously applied to the eye, as well as a corneal lens (removed after treatment). After treatment, anti-inflammatory drops are prescribed and must be applied to the eye for a few days. Other treatments may be needed.

Only surgery can correct this type of glaucoma. It is practiced from the first weeks of life.