Gonorrhea, commonly known as “hot-piss,” urethritis or gonorrhea, is a sexually transmitted infection (STI) caused by the bacteria Neisseria gonorrhoeae. It has been on the rise in France since 1998, like most STIs.

Gonorrhea is more often detected in men than in women, perhaps because in men, it causes obvious signs whereas in more than half of women, this infection causes no visible sign. Men aged 21 to 30 years and young women aged 16 to 25 are the most affected by the diagnosis of this sexually transmitted infection (STI)

It can infect the penis and the vagina, the urethra, the rectum, the throat and sometimes the eyes. In women, the cervix can also be damaged.

In Canada, the number of new cases of gonorrhea has more than doubled in the past 10 years and the proportion of antibiotic-resistant cases is increasing steadily.

Gonorrhea can also be transmitted to the newborn by its infected mother during delivery, causing an eye infection.

The symptoms of gonorrhea

The signs of gonorrhea or gonorrhea usually occur  2 to 5 days  after the moment of infection in the man, but they can probably take about ten days in the woman, probably sometimes more. The infection can appear in the rectum, penis, cervix or throat. In women, the infection passes unnoticed in more than half of the cases, causing no particular sign.

The most frequent development of gonococcal urethritis, which is not treated in humans, is the  disappearance of symptoms  : symptoms can disappear in more than 95% of men within 6 months. The infection persists, however, as long as it is not treated. In the absence of treatment or in case of failure, the risk of transmission remains, and makes the bed of complications as well as sequelae.

And in 1% of cases, men have few or none of these signs.

Most women have no evidence of gonorrhea, and that’s between 70% and 90% of cases! When they exist, these symptoms are often confused with those of a urinary or vaginal infection:

In the case of unprotected sex, screening must be done, combined with screening for chlamydia.

It is particularly common among men who have sex with men (MSM) and can present itself with the following signs:

Gonorrhea of ​​the mouth and throat is often associated with  no noticeable signs . Sometimes there may be pharyngitis or angina that regresses on its own. Oropharyngeal gonorrhea is present in 10% to 40% of MSM (men who have sex with men), 5% to 20% of women who already have vaginal or anorectal gonorrhea, and 3% to 10% of heterosexuals.

Eye damage is rare in adults. It occurs by auto-infection; the person suffering from gonorrhea of ​​the sexual zone and carrying the germs in his eyes with his hands. The signs are:

In women, gonorrhea can lead to pelvic inflammatory disease , which is an infection of the reproductive organs such as the fallopian tubes, ovaries and uterus. It can be the cause of infertility , increase the risk of ectopic pregnancies and cause chronic pelvic pain.

In humans, gonorrhea can cause inflammation of the prostate ( prostatitis ) or testes ( epididymitis ), which can lead to infertility.

In addition, a newborn infected by its mother may suffer from serious eye problems or blood infections(sepsis).

In women , the most common complications are inflammation of the para-urethral glands and Bartholin’s glands, infection of the uterus (endometritis) and infection of the fallopian tubes (salpingitis), often evolving without causing any particular signs. Afterwards, when the infection progresses, pelvic pain, infertility or risks of ectopic pregnancy may occur. This is due to the fact that the tubes may be blocked by gonococcal infection.

Some studies show that between 10 and 40% of untreated gonococcal cervical infections (gonococcal cervicitis) progress to pelvic inflammatory disease. However, no longitudinal study to assess the percentage of gonorrhea giving rise to major complications, including the risk of infertility, does not allow to quantify in France.

Compared with Chlamidiae trachomatis infection, gonorrhea-related complications
are less common. Both may, however, result in tubal infection (salpingitis) with a risk of infertility and ectopic pregnancy. Generalized forms of gonorrhea are rare. They may be in the form of sub-acute sepsis (circulation of gonococcal bacteria in the blood), and may be associated with skin damage. Spread gonorrhea can also manifest as osteo-articular involvement: subfere arthritis, purulent arthritis, tenosynovitis; 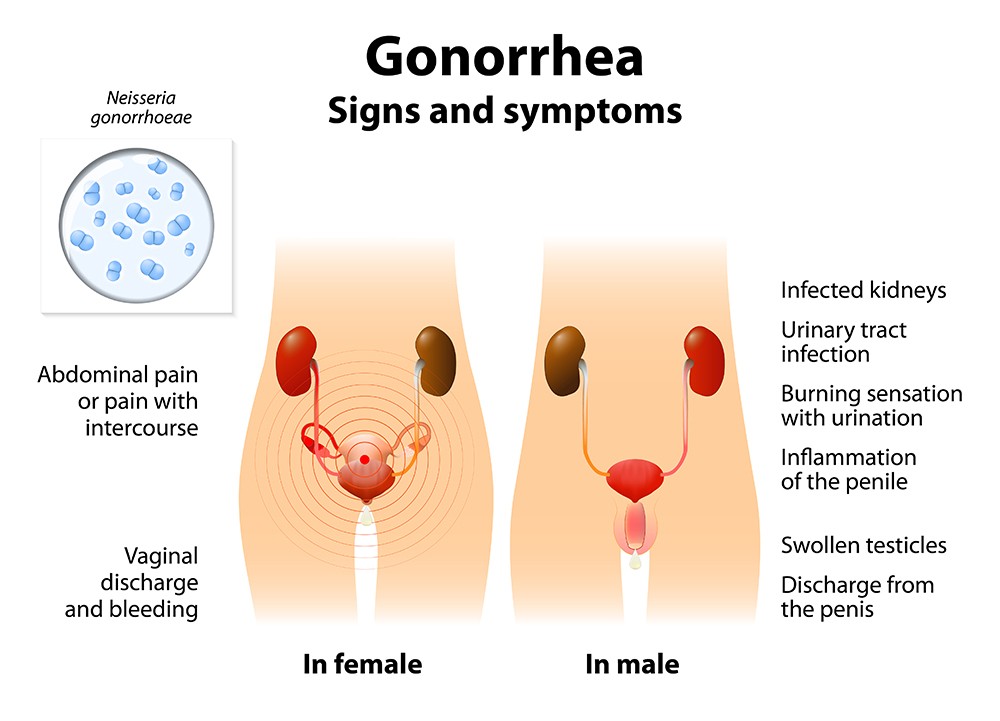 In case of signs of genital infection, burning while urinating in humans.

Prevention and medical treatment of gonorrhea 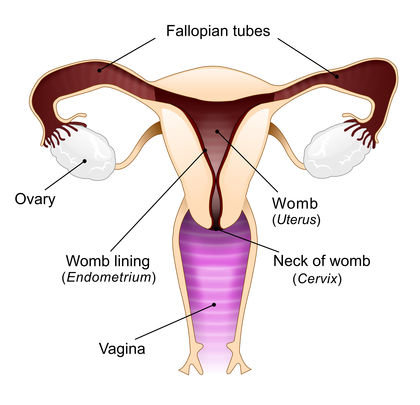 Gonorrhea is treated with single dose antibiotics orally or by intramuscular injection. Resistance has appeared for some antibiotics that have become ineffective, such as penicillins or tetracyclines. Ceftriaxone 500 mg is currently used in a single intramuscular or intravenous injection. The doctor systematically combines a treatment against chlamydia, for example azithromycin at a dose of 1 g in a single dose, because the two infections are often associated.
The treatment is given immediately after the sampling, before even waiting for the results in humans. The partner must also be treated. The person being treated must come back after 7 days.

All people taking gonorrhea treatment should also be screened for Chlamydia infection . In pregnant women who are at risk for sexually transmitted infections (STIs) or who have had an STI, just after giving birth, the newborn child receives drops of rifamycin in the eyes to treat possible gonorrhea.