Graves’ disease is related to a hyperthyroidism, which can have more or less important impacts on the functioning of the body: cardiovascular, respiratory, muscular, and others.

Graves’ disease, or exophthalmic goitre, is characterized by hyperthyroidism.

Hyperthyroidism is itself defined by too much production (more than the body needs) of thyroid hormones produced by the thyroid. The latter is an endocrine gland, producing essential hormones in the regulation of the various functions of the body. It is located at the anterior part of the neck, below the larynx.

The thyroid produces two main hormones: triiodothyronine (T3) and thyroxine (T4). The first being produced from the second. Triiodothyronine is also the hormone most involved in the development of many tissues of the body. These hormones circulate through the body through the bloodstream. They are then distributed to the tissues and target cells. 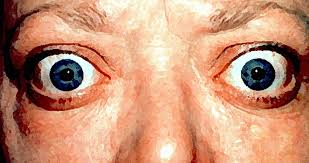 The thyroid hormones come into play in the metabolism (set of biochemical reactions allowing the body to maintain a state of equilibrium). They also come into play in the development of the brain, allow the optimal functioning of the respiratory system, cardiac or nervous. These hormones also regulate body temperature, muscle tone, menstrual cycles, weight, and cholesterol levels. In this sense, hyperthyroidism then causes dysfunctions, more or less important, in the context of these different functions of the body.

In pregnancy, hyperthyroidism can have more serious consequences for both the mother and the child. It can lead to spontaneous abortion, premature delivery, fetal malformations or functional disorders in children. In this sense, a close watch for these sick pregnant women must be worn.

The diagnosis of this pathology is then asserted when the antibody test TRAK is positive.

The therapeutic treatment of this disease directly depends on the level of TRAK antibodies measured in the blood.

Other antibodies may also be the subject of development of Graves’ disease. This concern between 30% and 50% of patient cases.

Who is affected by Graves’ disease?

Graves’ disease can affect every individual. In addition, young women between the ages of 20 and 30 are more concerned about the disease.

Hyperthyroidism, directly related to Graves’ disease, can cause certain signs and symptoms. Especially :

The diagnosis is then effective with regard to these symptoms experienced by the patient. These data can then be supplemented by performing an ultrasound of goiter, or by performing a scintigraphy.

In the case of a basilobial exophthalmitis, other clinical signs are identifiable: burning eyes, swelling in the eyelids, crying eyes, increased sensitivity to light (photophobia), eye pain, and others. The scanner can then confirm or invalidate the primary visual diagnosis.

The primary diagnosis is then clinical and visual. The next phase is the completion of complementary medical examinations (scanner, ultrasound, etc.) as well as biological examinations. The latter result in the analysis of the level of TSH in the blood, as well as thyroid hormones T3 and T4. These biological analyzes make it possible, in particular, to evaluate the severity of the disease.

At first, the treatment is medicated. It results in the prescription of Neomercazole (NMZ), for an average duration of 18 months. This treatment is variable depending on the level of T3 and T4 in the blood and should be monitored, once a week. Indeed, this medicine can cause side effects, such as fever or the development of angina.

The second phase, in the most extreme cases, the treatment is then surgical. This surgical procedure consists of a thyroidectomy.

As for the exophthalmia basedow, it is treated with corticosteroids in the context of acute eye inflammation.