The pubalgie is localized pubic pain (pub = pubis and algie = pain). But it corresponds to one of the painful situations of this zone whose reasons is various, and appears essentially at the sportsman. There is therefore no pubalgia, but a constellation of various pubalgic lesions which can, moreover, be combined, and this in subjects practicing a sport willingly intensely.

This is largely due to the fact that the pelvis, which includes the pubis, is a complex anatomical region in which different elements interact: joints, bones, tendons, muscles, nerves, etc.

The pubalgie is therefore a disease difficult to diagnose and treat properly. It requires the intervention of a doctor or a specialist surgeon who must be able to simultaneously rule out other diagnoses and highlight the origin of the pain, so as to ensure the most appropriate treatment possible.

Overall, the frequency of pubalgia is estimated between 5 and 18% in the sports population, but can be much higher in some sports.

Among the sports that favor the appearance of a pubalgie, the best known is probably football, but other activities such as hockey, tennis, are also involved: it is all sports including sports rapid changes of orientation and / or forced support on one foot (jumping, steeplechase, hedges, etc.).

During the 1980s, there was a “flare” of pubalgia, especially among young footballers. Today, the pathology being better known and better prevented and treated, it has fortunately become rarer.

As the name suggests, pubic pain is pain localized to the pubis and / or groin, possibly radiating to the inside of the thigh, in the genitals, to the abdominal wall. It can be median or located on one side or be bilateral, occur, usually, gradually or, more rarely, appear suddenly. Without treatment, it usually evolves towards worsening and stopping sports, or even abandoning other activities of daily life.

Schematically, pubalgia can be due to three mechanisms:

The pelvic bone, which is located in front of the bladder and above the genitals, is usually referred to as pubis. In fact, it is the junction of two bony branches, left and right, which meet, in the middle, by a joint called symphysis pubis and which is almost not mobile. At this point, a joint and bone pathology, called pubic osteoarthropathy, can develop, which resembles osteoarthritis.

Two muscles may be involved in the pubalgia: the abdominal muscles and the adductor muscles.

The first are composed of different muscle groups such as grand rights from the coast to join the basin (the famous chocolate bars), but also obliques and transverse, which are located laterally; the relative weakness of the latter can be the cause of a pubalgie.

The adductor muscles are located on the inner thighs and fit on the pelvis: their function is to allow movement of the lower limb from the outside to the inside. In some sports, they are particularly stressed and can induce a pubalgie.

Failure of the abdominal wall.

The entanglement of muscle groups in the lower abdomen does not create a homogeneous wall. There are thus some more fragile areas likely to open and allow the externalization of the contents of the abdomen (hernia). This is particularly the case of the inguinal region (also called the groin or hollow between the thigh and the pubis) which can be the seat of a hernia of the abdominal contents, called inguinal hernia. In the pubalgie, it is this same mechanism that may be involved, although there is, most often, no real hernia, but just an “opening” of this region.

The risk factors for pubalgia are multiple and differ according to the different forms of pubalgie.

A much arched back (hyperlordosis) thus tends to solicit the pubic symphysis excessively. An insufficiency of the lateral musculature of the abdomen (oblique and transverse) and / or an excess of musculature of the adductors and hamstrings may also be involved.

Among those at risk, especially young athletes, practicing a pivot or support sport on a monopodal foot: handball, tennis, fencing, football, hockey, rugby, basketball, and.

The diagnosis of a pubalgie is a diagnosis called “elimination”. That is to say, it is imperative to look one by one the other causes of pain that a pubalgie and eliminate them as and when to end up saying that this is indeed a groin. Other causes may require treatment different from that of the pubalgie.
This is particularly the case of tendinitis adductor or abdominal muscles that is treated with anti-inflammatory drugs, or local infiltrations (injections) of corticosteroids that are powerful anti-inflammatory.

In some cases, it may be bone fractures, called fatigue or stress fractures, linked to repeated microtrauma such as sports or intense physical activity and prolonged can cause them. Historically, this type of “low noise” fracture has been described in young soldiers who have been little trained and subjected to particularly demanding exercises.

Sport-induced microtrauma can also weaken bones and promote infection. In this case, the pain is associated with fever and there is a change in blood tests.

In all cases, the interrogation must be “police”, constituting a real investigation and make it possible to know: the type of sport practice, the frequency, the material used the modalities of the training, etc.

The clinical examination is also very important. The doctor looks very closely at the posture, the state of the muscles, looking for localized pains, signs of inguinal hernia. He conducts his exam right after a workout and also at rest.

Among the additional tests, the most useful are: pelvic X-ray, ultrasound and MRI. 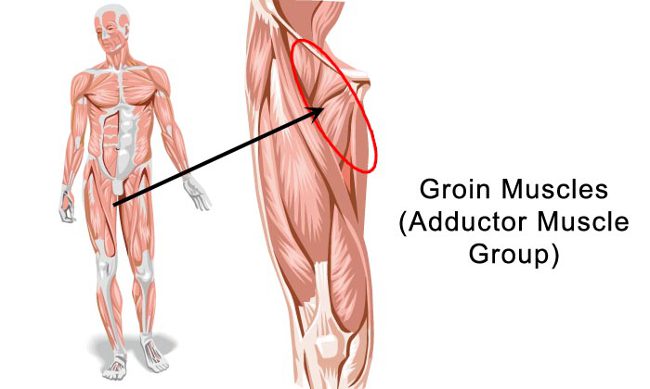 The treatment of pubalgia is, in the first place medical. It associates reeducation and sometimes drugs, with stop of the sport. Most often, joint and muscular disorders respond well to this care. Surgical treatment and selected 2 intention.

However, the existence of pathology of the abdominal wall most often requires surgery immediately. For top athletes, it is often the latter approach that is preferred because the goal is to recover a very high level of performance.

Prevention is also part of the treatment and today a lot of effort has been made in this direction, by encouraging stretching exercises and abdominal weight training, to limit the asymmetry of muscle skills. The correction of any anomalies of the static is also important, sometimes requiring the wearing of soles adapted.