Tumor swellings are not gynecomastia.

When a man’s mammary gland has been stimulated by the hormones and is swollen, if one does not act quickly enough by caring for it, the breast volume may remain troublesome thereafter. In this case, next to a treatment a little too late, a surgery to remove the gland can help to find an aesthetically more masculine chest.
When the mammary gland remains swollen and gynecomastia is not treated, cysts and fibroadenomas may occur, as in women’s breasts. On the other hand, breast cancer rarely occurs in men with gynecomastia. 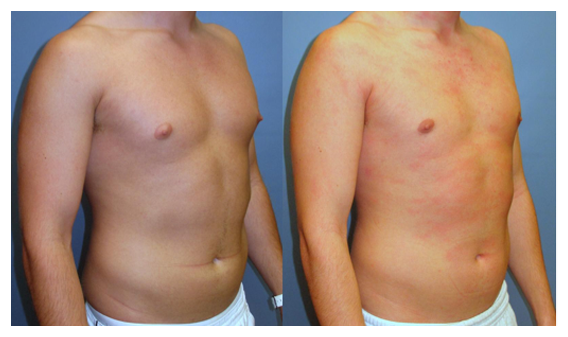 Why is there a gynecomastia?

A man has gynecomastia because there is an imbalance between estrogen-like hormones (which stimulate the proliferation of the mammary gland, for example at puberty in women) and the androgens that slow down this proliferation.

Gynecomastia is related to a change in the hormonal balance between estrogens and androgens.

Many gynecomastias are in no way related to a health problem. These are physiological (or normal) gynecomastia.

In the newborn, swelling of the mammary glands is normal and nearly 90% of them have gynecomastia. It is related to the passage of the hormones of the placenta (estrogen) in the circulation. It is a transient phenomenon that stops itself some time after birth.

In adolescents, more than half of boys have gynecomastia at puberty. This is a normal phenomenon usually occurring around 13-14 years old and related to the hormonal phenomena of puberty. This lasts between 6 months and 2 years and it can be scary for a teenager, even if it is commonplace.

In older men, gynecomastia can appear with age after age 50. The older we get, the more this swelling of the mammary gland is common. It is related to the decrease of androgens with the years.

Gynecomastia linked to an anomaly or an illness

Some gynecomastia persists after adolescence and is therefore present in adult men. This represents ¼ of adult men’s cases of gynecomastia. On the medical side, this is not serious, but it can be inconvenient aesthetically.

Gynecomastia due to the adverse effect of drugs

They also represent ¼ gynecomastia of the adult man.

Gynecomastia without known cause found

They also represent ¼ gynecomastia. They are often present in overweight older men, probably also with other unknown factors. 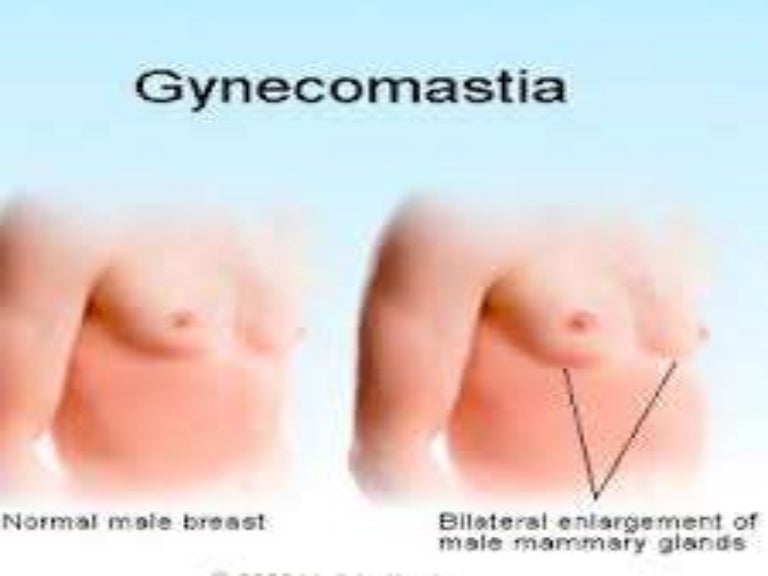 The symptom of gynecomastia

Gynecomastia is an increase in volume of the mammary gland. It is perceived by palpating, under the nipple, an inflated gland. This can be discovered on examination by a doctor or by the man himself who then consults because he is embarrassed.

Since gynecomastia is linked to hormones circulating in the blood, the two mammary glands are often affected. However, sometimes only one of the two glands may swell, because the tissues of both mammary glands may exhibit differences in hormone sensitivity.
It is important to also observe if there is a flow in the nipples pinching around the areola.

Nipple swelling in humans may also be lipomastia, increased fat volume without increased volume of the mammary gland. The consistency is then softer, not centered on the nipple and is often associated with being overweight.

People at risk for gynecomastia

When a newborn or a teenager has gynecomastia, it is not necessary to consult a doctor.

In the case of a teenager, if gynecomastia lasts more than a year or two, if it seems very important, it can be reassuring to seek the advice of a doctor.
The doctor to consult is the general practitioner or a hormone specialist, the endocrinologist.

In a young man (non-adolescent) with swelling of the mammary glands on one or both sides, a doctor should be consulted.
If you take medication, you should read the instructions and side effects to see if this treatment is likely to result in gynecomastia. In this case, it is most often possible for the doctor to change treatment.

When these tests are necessary, they may consist of a breast ultrasound (completely painless ultrasound examination). Sometimes a mammogram (x-ray) can be requested as well as an ultrasound of the testicles and the thyroid gland.

Medical treatment of abnormal gynecomastia should be rapid, in the first 6 to 12 months, when the gland is swollen and tender. Indeed, even if the treatment restores a satisfactory hormonal balance, the gland may retain some volume, the treatment is no longer able to deflate.

There are also suction techniques with a scar under the armpit or a small incision around the areola.