Head trauma can be mild or severe, with all possible mediators. Its severity depends on the existence of intra-cerebral lesions or the existence of an extra-cerebral hematoma, bleeding between the skull and the brain. From a functional point of view, brain damage is linked to acceleration-deceleration mechanisms (the most dangerous) responsible for stretching, crushing and shearing forces within the brain. These forces can stretch neurons (brain cells) and their axonal extensions (“cables”). Indeed, the brain weighing nearly 1400 grams has its own inertia, especially since it is not attached directly to the skull bone. During a sufficiently violent shock, the brain hits the Inside the skull behind and forward, or on the sides, like the human body subjected to a sudden acceleration or deceleration, type frontal accident in a car. The two mechanisms are often associated by a phenomenon of coup and contre-coup. 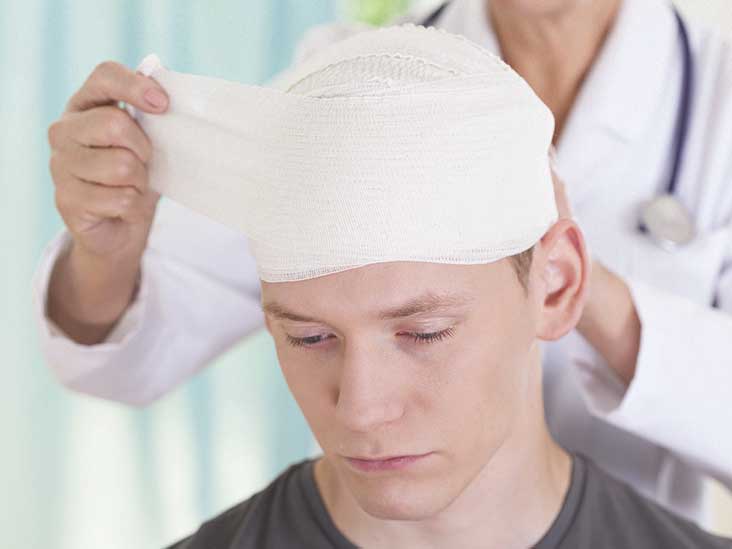 Equivalent to a knockout, a significant shaking of the brain will cause brain stunting, responsible for the loss of consciousness, and likely to trigger brain damage or hematoma. In general, the faster the return of consciousness, the greater the chances of a return to normal without squeal. On the other hand, a deep and lasting loss of consciousness is more worrying and may correspond to the existence of brain lesions. However, a quick return to normal is not enough to formally eliminate the existence of a brain injury. Consequently, any loss of initial knowledge in a traumatic context must be considered as a sign of seriousness, until proven otherwise, and lead to close clinical surveillance, and this, even in the absence of visible brain lesions on CT or MRI. But beware, the absence of initial loss of consciousness cannot be considered as the mark of a benign CT. Indeed, according to a large study, this initial loss of knowledge can be missing in 50 to 66% of cases where the CT scan finds an intracranial lesion.

The severity of a head injury does not depend solely on the existence or not of a fractured skull. Clearly, a radio graphically visible fracture should not be the only severity parameter for head trauma, which is why it is not routinely performed. Indeed, if the fracture of the skull is evidence of severe trauma, enough to break the bone, in itself it does not require any special treatment other than analgesics to calm the pain. We can therefore suffer from a skull fracture without any associated cerebral lesion or hematoma. One can also suffer from a serious intracranial hematoma, and this, in the absence of fracture of the skull. Some even consider that the fracture corresponds to the dissipation of the shock wave that goes to blur on the surface instead of spreading in the depth of the brain, thus protecting the underlying brain structures, like the shell of an egg. However, the finding of a fracture line, especially at the temporal level, should encourage caution because of an increased risk of developing an extra-Dural hematoma (risk multiplied by 25).

Located between the inner face of the skull and the surface of the brain, these extra-cerebral hematomas correspond to collections of blood most often linked to the tearing of the fine venous vessels irrigating the three membranes surrounding the brain (meanings) which are located just under the skull bone. Acceleration-deceleration phenomena can cause these pullouts. These three meanings constitute a cerebral protection are insufficient in case of major trauma.

In practice, there are: 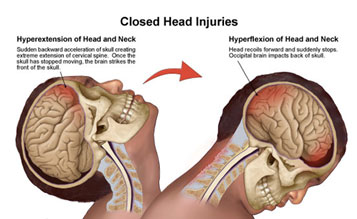 People at risk for head trauma They depend on the intensity of the initial trauma and the injuries caused. Apart from pain and local lesions in the scalp (wound, hematoma, bruise …), head trauma can be accompanied by:

Levels of severity and treatments of head trauma

Schematically, there are 3 different levels of severity:
– mild head trauma,
– moderate
head trauma – severe head trauma.
All intermediaries are possible between the 3 degrees of gravity. Among the parameters used for the classification, we find the existence of an initial loss of consciousness, prolonged or not, of scalp lesions, associated neurological signs, epilepsy or an alteration of consciousness after head trauma. This classification, which remains relatively subjective, must make it possible to determine the course of action. In this sense, the clinical examination and the collection of the elements concerning the accident are essential.

Schematically, we distinguish three groups that condition the conduct to take:

Conduct to keep: return home with surveillance by the entourage.

Conduct to be held: hospitalization for surveillance, CT and X-ray of the face if necessary.

Conduct to be maintained: hospitalization in a neurosurgical environment, CT scan.

It is not the head trauma that is treated, but its consequences. Every head trauma is special. Many treatments exist and can be associated, depending on the type of injury presented