The migraine is a particular form of headache (headache). It is manifested by seizures that can last from a few hours to a few days. The frequency of seizures varies widely from person to person, ranging from several seizures per week to one seizure a year or less.

Migraine differs from “ordinary” headache, especially in terms of duration, intensity and various other symptoms. Thus, a migraine attack often begins with pain felt on one side of the head or located near an eye . Pain is often perceived as pulsations in the skull, and is aggravated by light and sound (and sometimes odors). Migraine can also be accompanied by nausea and vomiting.

Surprisingly, in 10% to 30% of cases, migraine attacks are preceded by physiological manifestations that are grouped under the name of aura . Auras are essentially visual disturbances that can take the form of flashes of light, lines of bright colors or a temporary loss of vision. These symptoms disappear in less than an hour. Then comes the headache.

The migraine affects about 12% of adults, women are three times more affected than men. A recent study found that 26% of Canadian women were migraine sufferers , 38 with a high frequency of seizures. Migraine is also prevalent in children and adolescents (5% to 10%), in whom it is often underdiagnosed. According to Uptodate, in the general population, 17% of women and 6% of men suffer from migraine. In the 30-39 years, it would be 24% of women and 7% of men.

The frequency of migraine attacks varies greatly from one individual to another. Some people have a few a year, while others have 3 or 4 a month. In some cases, seizures can occur several times a week, but rarely every day.

The first attacks usually appear during childhood or young adulthood . Over the age of 40, migraines are more rare and they often disappear after 50 years.

The mechanisms of migraine

It’s unclear why some people have headaches , tension headaches (caused by nervous tension or anxiety) or migraines and why others simply do not, even if they are exposed to the same triggers .

From the 1960s to the 1990s, it was thought that migraines were primarily caused by vascular changes: a tightening of blood vessels (vasoconstriction) that surround the brain, followed by swelling (vasodilatation). However, subsequent research shows that the origin of migraine is much more complex. Indeed, it is a whole cascade of reactions in the nervous system that would cause this intense headache. A neurological mechanism has recently been discovered to explain why light exacerbates the pain of migraine while darkness calms it down.These chain reactions have effects not only on blood vessels, but also on inflammation , the neurotransmitters and other elements.

Without a thorough understanding of the mechanisms of migraine, we are still better aware of the triggers (see Risk Factors ) and the means to combat it.

Although the pain they cause is very intense, migraine attacks have no immediate health consequences. However, recent studies have shown that migraine particularly that with aura, is associated in the long term with an increased risk of cardiovascular disorders . The risk of myocardial infarction is thus multiplied by 2 in migraine patients. The mechanisms are not yet well understood. It is therefore important to adopt a healthy lifestyle to reduce cardiovascular risk: do not smoke, eat well and exercise regularly.

In addition, migraine can dramatically alter the quality of life of those who suffer from it. It is also an important cause of absenteeism at school and at work. Hence the importance of consulting a doctor to find an effective treatment. 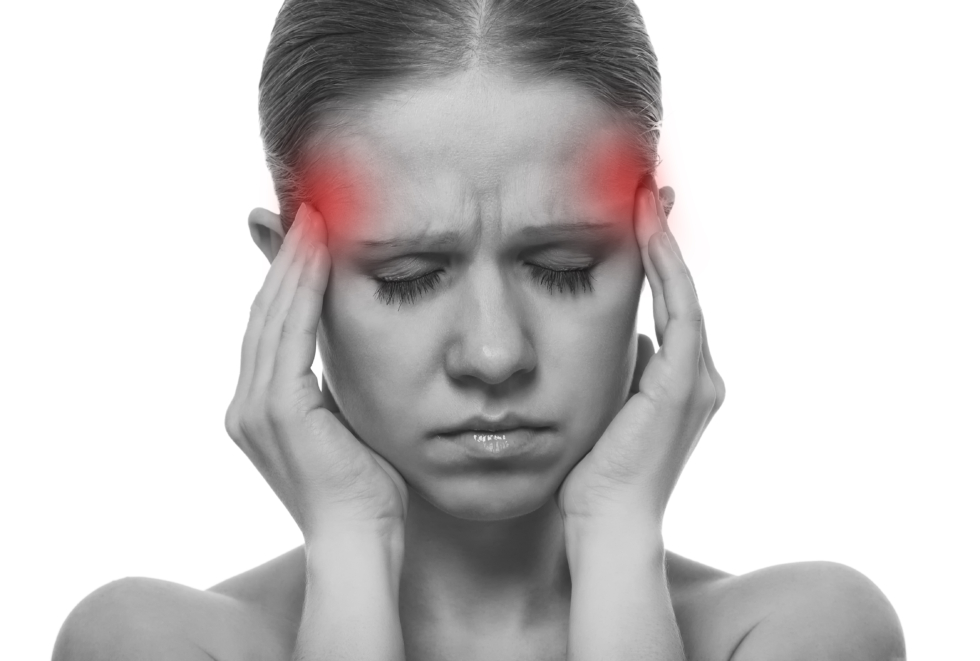 The symptoms of migraine

In most cases, the migraine attack occurs without warning signs . In some people, however, the crisis is preceded by an aura or a few warning signs, which vary from person to person. One person may have crises without aura, and others with aura.

This phenomenon of neurological nature lasts 5 to 60 minutes, then the headache appears. So the person knows in advance that in a few minutes she will have a very bad headache. However, it also happens that the aura is not followed by migraine. The aura can manifest itself in different ways.

They precede the headache from a few hours to 2 days. Here are the most common ones.

The main symptoms of Headache

Here are the main symptoms of the migraine attack. In general, they last from 4 to 72 hours.

Note. The headache is often followed by fatigue, difficulty concentrating and sometimes a feeling of euphoria.

People at risk for Headache

The following factors are known to trigger  migraine attacks . They vary from one person to another. Each person should learn to recognize the elements that cause his migraine, to avoid them as much as possible.

Various  personal  and  environmental factors  have been identified as triggers by people with migraine headaches. Here are a few. About 15% to 20% of people with migraine headaches report that certain  foods  are the source of their seizures. The most frequently cited foods are:

Of course, getting to know the foods that trigger migraine is a natural and logical way to reduce the frequency of seizures. On the other hand, this approach requires more effort and discipline, in particular because it is necessary to discover problematic foods. To do this, keeping a  migraine diary  is certainly a good starting point (see Prevention section). It may also be helpful to consult a nutrition specialist.

The prevention of migraine The so-called “prophylactic” drugs do not cure migraine but they aim to reduce the intensity and frequency of seizures. They constitute a background treatment and usually need to be taken daily. The preventive effect can take from 2 to 3 months before manifesting itself.

These medications are usually only prescribed to people who suffer from migraines frequently (3 or more attacks per month) and whose activities are sufficiently disrupted to warrant medication. But there is no really established rule: the initiation of treatment is discussed on a case-by-case basis with the doctor. You should know that some drugs have side effects and that their long-term effectiveness is not guaranteed. However, for people with severe and frequent migraines, prophylactic medications can be a blessing.

The most commonly prescribed medications are:

The Botox , especially a bacterial toxin used to reduce wrinkles, may also help to relax the tense muscles of the head and neck. In October 2010, the Food and Drug Administration (FDA) approved the use of Botox injections for preventive treatment of migraine chronic. This indication concerns the rare cases where migraines occur at least 15 days a month. However, the therapeutic effect of Botox is low when compared to that of a placebo . Indeed, according to 2 studies conducted with 1,384 subjects (partially funded by the manufacturer of Botox) , a placebo treatmentshorten the duration of migraines by 6.2 days per month; Botox, 8.2 days.

It is important to discuss with your doctor the potential risks of Botox, which should be given every 3 months. The health authorities of Canada and France are studying the possibility of approving this therapeutic indication. Doctors can nevertheless use it off-label  that is for “non-intended use”.

Treatments in case of crisis

There is no cure for migraine . Seizures should be treated with painkillers when they occur. All medications, whatever they are, will be more effective in relieving the pain if they are used as soon as the precursors of the migraine appear , or at the beginning of the headache if there are no signs precursors.

People who only experience a few migraine attacks a year may be able to take medications occasionally without worrying too much. The situation is different for those who suffer from frequent migraines. Indeed, many studies indicate that, on the one hand, the drugs can lose their effectiveness if one consumes a large quantity and, on the other hand, that they can even lead to an increase in the frequency of migraines. It is important to consult your doctor if you take a painkiller more than 10 to 15 days a month, because there is a risk of headache by drug abuse (headaches “rebound”). People who have frequent migraine attacks therefore have an interest in favoring a preventive approach to decrease their symptoms.

The acetylsalicylic acid (aspirin), the acetaminophen (Tylenol) and anti-inflammatory non-steroidal prescription (ibuprofen, Advil, Motrin, etc.) are often sufficient to break a mild migraine attack if the takes as soon as the first symptoms appear. Some preparations have been specifically designed to relieve migraines. This is the case of Liqui-Gels Advil (and Liqui-Gels Advil Extra-Fort), which contain a solubilized form of ibuprofen, with a slightly faster effect.

Warning. Consumed regularly, nonsteroidal anti-inflammatory drugs can irritate the stomach and cause ulcers. Ask the pharmacist or your doctor.

Some drugs contain a combination of painkiller molecules. This is the case of Tylenol Ultra-Efficace, which contains a mixture of acetaminophen (500 mg per tablet) and caffeine (65 mg).

If over-the-counter medications are not enough, doctors can offer a wide range of more powerful products , depending on the case and personal tolerance.

Advice in case of crisis