The heart failure is the inability of the heart to pump enough blood to meet the needs of the organization. It is a serious health problem that results, among other things, in breathlessness and tiredness disproportionate to the effort produced.

It usually occurs in individuals whose health has been weakened for several years by heart or respiratory disorders or by hypertension.

The number of cases of heart failure has increased over the last 30 years 11 . Among the reasons for this increase, there is the improvement of the treatment of heart disorders and the prolongation of the life expectancy of those affected. Although recent statistics are not available, heart failure is a major cause of death in the elderly . The survival rate 5 years after diagnosis is approximately 50% . The heart failure occurs when the heart no longer has as much force to expel blood in the arteries and it fills less blood because it is stiffened or dilated. Each contraction of the heart is therefore less effective. The blood takes longer to pass through the arteries and tends to stagnate in the veins. It is because of this congestion of blood in the veins that it is called congestive heart failure.

Usually, heart failure reaches either of the 2 ventricles, right or left. In some cases, both ventricles may be affected.

In the vast majority of cases, heart failure is chronic . The tiredness is often the first symptom to appear. As the disease progresses, shortness of breath appears on exertion and then on rest.

Sometimes the treatment of the cause of heart failure makes it disappear (for example, a cardiac malformation corrected by surgery). In other cases, medications and the adoption of healthy lifestyle habits provide better comfort and help to resume certain neglected activities.

The New York Heart Association defines 4 stages of heart failure progression based on the level of physical activity tolerated. They vary according to the health status of the person, his age, the cause of heart failure and its severity.

Left untreated, heart failure can quickly lead to serious complications. Fluids accumulate in the lungs and make breathing difficult. The risks of arrhythmia and cardiac arrest increase. In addition, if a blood clot forms in the veins, it can obstruct the pulmonary artery ( pulmonary embolism), a life-threatening problem. Finally, in the absence of treatment, heart failure can damage the liver and kidneys, which are vital organs.

The clinical examination that allows the doctor to diagnose heart failure may be supplemented by more in-depth examinations to determine its cause and severity. 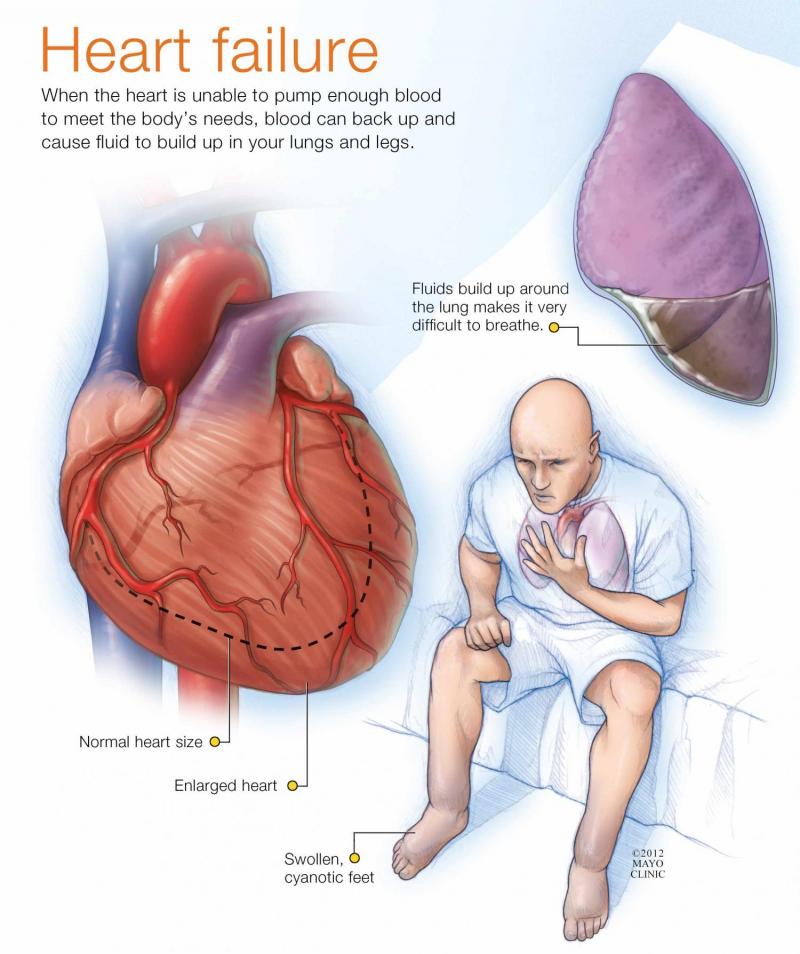 People at risk for Heart failure

When the cause is treatable, one must first tackle it. For example, repairing or replacing a heart valve can put an end to heart failure .

Importantly, the sooner the disease is diagnosed, the more effective the treatment. Unfortunately, she is often diagnosed at an advanced stage.

For the majority of people, it will be necessary to take medication . Often, three or four types of drugs are combined to achieve optimal results. Their action is complementary: some, for example, help to strengthen the heart , others to reduce water retention.

Inhibitors of Angiotensinogen Converting Enzyme (ACEI). Their vasodilator action (which increases the opening of the arteries) has the effect of lowering blood pressure and reducing the effort required in the heart . In addition, they reduce the retention of water and salts by the kidneys. ACE inhibitors prevent the formation of angiotensin II, a vasoconstrictor substance (which reduces the opening of arteries) that increases blood pressure. This type of medicine causes an irritating cough in about 10% of its users. Examples include lisinopril, captopril and enalapril. 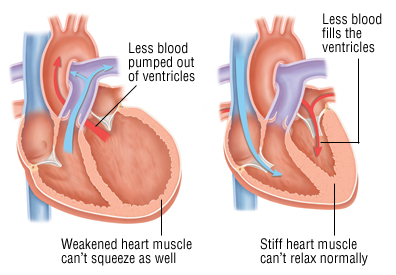 Blockers of angiotensin II receptors. These drugs block the vasoconstrictor effect of angiotensin II by preventing it from attaching to its site of action. Their effect is therefore similar to that of ACEIs. Examples include losartan and valsartan.

Beta-blockers. These drugs (for example, carvedilol, bisoprolol and metoprolol) reduce the frequency of heartbeat and allow better contraction of the heart.

Diuretics. Mostly used to treat hypertension, diuretics may also be useful in heart failure . By increasing the volume of urine, they help eliminate excess fluids that accumulate in the lungs or limbs. The most commonly used are furosemide and bumetanide. These diuretics cause the loss of minerals, such as potassium and magnesium. Supplementation is justified in some cases, depending on the results obtained during blood tests.

Digoxin. Its tonic effect on the heart makes it possible to obtain more effective cardiac contractions. In addition, it slows and regulates the heart rate . Digoxin is extracted from the foxglove, an herbaceous plant.

Improving fitness is also part of the therapeutic approach. It plays a determining role on the symptoms. Anything that reduces cardiac stress has a beneficial effect:

The doctor or nurse in the heart failure clinic offers advice on this.

Some surgical procedures may be prescribed to treat the cause of heart failure. Thus, it is possible to restore blood flow in a coronary artery obstructed by atherosclerosis, using coronary angioplasty or coronary artery bypass surgery (for more information, see our card on heart disorders). In the case of certain arrhythmias, an artificial pacemaker or defibrillator may be implanted if there is a high risk of cardiac arrest.