haemorrhage is a significant loss of blood, a bleeding that does not stop. This flow caused by the rupture of a blood vessel may be visible. This is known as external bleeding because the blood flows through a wound that has usually appeared as a result of trauma. The flow of blood can also occur inside the body: it is in this case an internal hemorrhage . Blood flows into the body.

Hemorrhage can be arterial, venous or capillary (example: a small cut that causes a slight bleeding). The most important, quickest and most difficult to stop bleeding often occur in case of arterial bleeding . The blood is then light red. Bleeding is usually easier to stop when venous bleeding occurs when the blood is dark red.

The body contains between 5 and 6 liters of blood that circulates between the heart and the blood vessels, arteries and veins. Normally, in case of bleeding, clots form and the blood coagulates. The bleeding is naturally stopped.

Haemorrhage can be caused by a violent blow to the head that can cause bleeding in the brain. Gastrointestinal bleeding can end up in the stool and be a sign of illness. Just as the presence of blood in a sputum or in vaginal discharge. Hemorrhage may also occur during or after childbirth . It is also a significant cause of death in the mother who has just given birth. A hematoma can form or blood can be found in cavities of the body such as the belly, lungs ( hemothorax ) or the heart ( hemopericardium ).

In case of severe haemorrhage, it is essential to do everything possible to stop the bleeding because a significant loss of blood can be fatal . Hemorrhage is all the more serious as blood loss is high since blood plays a vital role in transporting oxygen to the organs.

Some people have higher risks of bleeding. These include people with hemophilia , a hereditary disease characterized by the inability of blood to clot, or people treated with blood thinners , drugs that can thin the blood. Several other diseases affect the mechanisms of coagulation, such as a platelet deficiency. In the event of a cut, the person being treated can lose a lot of blood if his treatment is not properly balanced. The risk is also high in case of stroke, the latter may cause the appearance of a hematoma.

The causes of hemorrhage can be very diverse.

The external bleeding may be caused by a sharp object. They can also be related to a shock, a fall or a blow.

The internal bleeding can occur due to a ruptured aneurysm or in the presence of a tumor (benign or malignant). Crohn’s disease, ulcerative colitis or hemorrhoids may also be responsible for the onset of gastrointestinal bleeding. Gynecologically, an IUD can cause bleeding as well as endometriosis or the presence of uterine fibroids. Finally, drugs such as nonsteroidal anti-inflammatory drugs, aspirin or anticoagulants can also cause haemorrhage.

Complications of bleeding can be very serious or even fatal, and very quickly since organs such as the brain or the heart absolutely need to receive oxygen in the blood to function.

People at risk for hemorrhage

People who have a higher risk of suffering from a haemorrhage are mainly people who take blood thinners (1% of French people would take Anti-Vitamin K, an anticoagulant, according to the High Authority of Health) and people with one of many diseases affecting the mechanisms of coagulation. 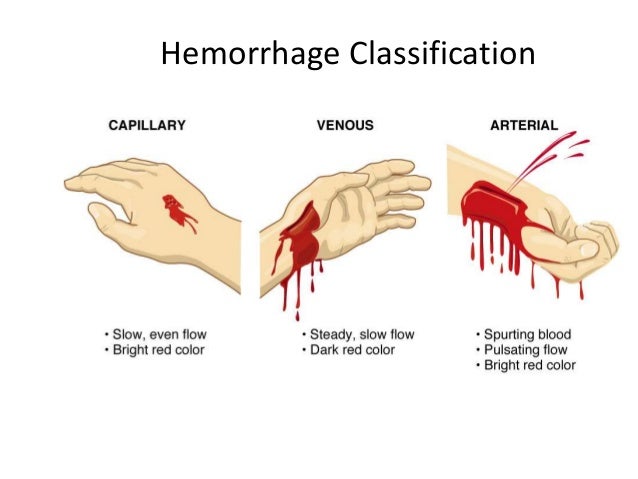 Several drugs such as antibiotics can interact with anticoagulants, either by decreasing their effect or on the contrary by increasing it, and thus cause either clots or bleeding. The aspirin also increases the risk of bleeding. Finally, people suffering from Crohn’s disease, ulcerative colitis, peptic ulcer or several other diseases of the digestive tract may also suffer haemorrhage, present in the stool.

To reduce the risk of bleeding when taking anticoagulants, ensure that the treatment is well balanced and that the patient is regularly monitored. Thus, the blood is not too fluid and haemorrhages much less important in case of cut or shock.

In case of haemorrhage, it is important to react quickly and to perform simple actions while calling for help. Faced with a small bleeding in the skin for example, bleeding usually does not require special medical care. The wound can be simply cleaned with cold water and then with soap. It is not always necessary to apply a bandage once the bleeding is stopped. It all depends on the location of the injury. If the wound is not in contact with clothing or an area that can easily get dirty, it is good to leave it in the open so that it heals more quickly.

If the bleeding is greater, it is necessary to try to stop the bleeding by compressing the wound, with the hand protected by a glove or a clean cloth or with as many compresses as necessary, and to clean the latter. Do not remove the bandage because this action may cause the wound that has just begun to close.

If the bleeding is even greater, the person suffering from it must be lying down and, to stop the bleeding, a compression point (or a tourniquet in the event of failure of the compressive dressing) must be performed upstream of the wound. waiting for the arrival of help. The tourniquet is used in case of last resort and it is preferable that it is put in place by a professional.

It is necessary to check that the wound does not contain foreign bodies . They will in any case be removed by a professional as soon as they are located deep in the wound.

On a purely medical basis, a complete blood transfusion may be necessary if blood loss has been significant. Transfusion of platelets or other clotting factors may also be necessary. The vessel responsible for internal bleeding may be sutured. Stitches may be needed to close a wound.
A drain can also be useful for cleaning a wound. If the wound is very deep, surgery to treat the muscles or tendons is imperative.

For internal hemorrhages, management is obviously much more complex and depends on the area of ​​the affected organism. Relief or a doctor must be called.

A medical team must ultimately be contacted if the bleeding is not under control or when stitches are needed. If an infection develops as a result of wound bleeding, a doctor should be consulted as well.

Treating bleeding can be risky since diseases can be transmitted through the blood (HIV, viral hepatitis). Great caution is therefore required when first aid should be applied to a person who has external bleeding.