Hirschsprung’s disease (HSCR) is characterized by paralysis of the terminal part of the large intestine.
This pathology appears from birth and is the consequence of an absence of nerve ganglia (cells forming a bulge on the nerve path) of the intestinal wall.

The swallowing of food through the digestive tract until excretion is, in large part, possible through intestinal peristalsis. This peristalsis is a set of contractions of the intestinal muscles allowing the advancement of the alimentary bolus along the digestive tract.
In this situation where there is absence of nerve ganglia in the large intestine, peristalsis is no longer provided by the body. In this sense, there is a dilation of the intestine and an increase in its volume.

The associated symptoms are all the more important if the area weakened in ganglions is large.

The HSCR affects about 1 in 5,000 births a year. The form affecting the terminal part of the colon (large intestine) mainly affects boys. Girls, in turn, are more subject to the development of this disease in a more extensive form.
This pathology predominantly affects infants and young children.

Several forms of the disease have been demonstrated :
– the “classical” form, or also called “short-segment form”. This form is the most common in patients with this pathology, up to 80%. This form of the disease affects the terminal part of the colon to the rectal segment;
– the “long-segment” form, which extends to the sigmoid colon, affects about 15% of patients;
– the form “total colic”, reaching the colon in its entirety, concerns 5% of patients.

Intestinal transit is controlled by the nervous system. Nervous ganglia are therefore located in the intestine allowing the transfer of information from the brain for the control of intestinal peristalsis and thus the progression of food along the digestive tract.
An absence of these ganglia, in the case of Hirschsprung’s disease, prevents any transmission of information and then blocks intestinal peristalsis. The food can no longer cross the intestines and become trapped in the digestive tract. 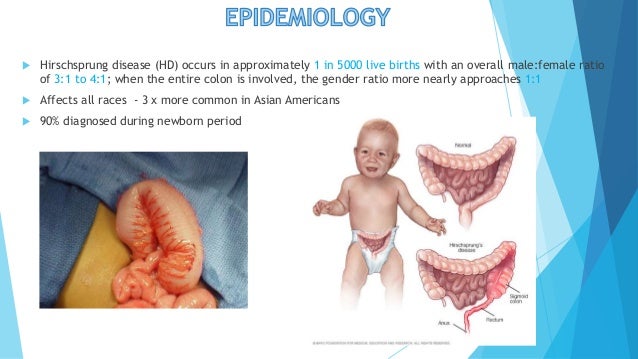 The symptoms of this disease are usually detectable very early at birth. Nevertheless, in some cases, they may appear after one or two years.
Symptoms affecting newborns and children are mainly:
– transit difficulties;
– an impossibility to expel meconium (first excrements of the newborn) during the first 48 hours;
– constipation;
– jaundice;
– vomitings ;
– diarrhea;
– abdominal pain;
– undernourishment.

Hirschsprung’s disease is due to an abnormality in the development of the enteric nervous system. It is an aganglionosis, ie an absence of nerve ganglia (also called “Cajal cells”) in the intestines. This ganglionic deficit is located more particularly at the level of the terminal part of the large intestine (colon).
In the subject suffering from this pathology, this part of the intestine thus remains in a state of tonic and permanent contraction. This situation leads to intestinal obstruction.

Both genetic and environmental factors have been implicated in the development of Hirschsprung’s disease.

Indeed, certain genes have been highlighted in the development of this pathogenesis. This is a polygenetic disease that concerns in particular the genes:
– Ret proco-oncogene (RET);
the glial cell-derived neutrotrophic factor (GDNF) gene;
the endothelin type B receptor gene (EDNRB);
the endothelin 3 gene (EDN3);
endothelin 1 conversion enzyme 1 gene (ECE1);
the gene for the L1 cell adhesion molecule (L1CAM).

As previously stated, Hirschsprung’s disease is the consequence of the absence of nerve ganglia in the large intestine up to the anus, preventing intestinal peristalsis and therefore ancestry of food at this level.

This deficiency of cells of Cajal (ganglions nervous) is the consequence of a deficit at the level of the increase of these cells during the fetal development. The causes of this lack of cell growth before birth are not yet known. Nevertheless, the possibility of a relationship between the general health of the mother during her pregnancy and the absence of this type of cells in the fetus was submitted.

In addition, certain pathologies may also be an additional risk factor in terms of the development of Hirschsprung’s disease. This is particularly the case of Trisomy.

Prevention and treatment of Hirschsprung’s disease

The differential diagnosis is based on the characteristic symptoms of the disease presented by the subject: intestinal obstruction, anorectal stenosis, pelvic tumors, etc.

The diagnosis most often associated with the disease is through a rectal biopsy. This biopsy is evidence of the presence or absence of nerve ganglia in the large intestine. In addition, overexpression of acetylcholine esterase (enzyme for hydrolyzing acetylcholine to acetic acid and choline).

A barium enema (X-ray examination to visualize the large intestine) can also be performed in the diagnosis of this pathology. This method visualizes a transient zone of absence of nerve cells, indicating the development of Hischsprung’s disease. Nevertheless, this diagnostic technique is not 100% reliable. Indeed, 10 to 15% of cases of Hirschsprung’s disease would not be diagnosed after this attempt at diagnosis.

Surgery is the treatment of the most important disease. It allows the removal of the part of the defective intestine from nerve cells.
In the case of total colon damage, a colon transplant may be necessary.
Following this, a stoma (surgical technique to make the connection between two organs) can be performed to connect the operated part of the intestine with the anus or with the upper part of the intestine. This stoma can be either permanent or temporary depending on the case.

Surgery helps to reduce the symptoms associated with the disease. Nevertheless, the prognosis is not total is inflammatory complications can appear and be lethal.