The hyperthyroidism refers to an abnormally high production of hormones by the gland thyroid , the butterfly-shaped member located at the base of the neck under the Adam’s apple (see diagram). It is not a swelling of the thyroid, as is sometimes believed.

The disease usually starts in adults between 20 and 40 years old. That said, it can happen at any age, and it can also be seen in children and the elderly. It is less common than hypothyroidism.

The influence of the thyroid gland on the body is major: its main role is to regulate the metabolism of the cells of our body. It therefore determines the speed of the “motor” of our cells and organs and the rate at which “fuels” will be used: lipids (fats), proteins and carbohydrates (sugars). In people with hyperthyroidism , the motor works in fast motion. They may feel nervous, have frequent bowel movements, shake and lose weight, for example. Note. Some medications , such as those that are high in iodine , can lead to temporary hyperthyroidism. This is the case, for example, amiodarone, prescribed in some cases of cardiac arrhythmia, and iodinated contrast media sometimes injected during a radiology examination.

Untreated major hyperthyroidism can lead to a thyrotoxic crisis . During such a crisis, all signs of hyperthyroidism are combined and expressed at their peak, which can lead to serious complications, such as heart failure or coma. The person is confused and agitated. This situation requires emergency medical care.

The symptoms of hyperthyroidism can be subtle, especially in older people. Only a blood test (see box below) showing both a decrease in TSH levels and a rise in thyroid hormone levels (T4 and T3) will confirm the diagnosis. The onset of symptoms listed below should prompt consultation with a doctor for a safe diagnosis.

People at risk for hyperthyroidism

Medicine does not recognize a specific risk factor for hyperthyroidism. In most cases, it is an autoimmune disease (Graves’ disease) whose exact cause is unknown. 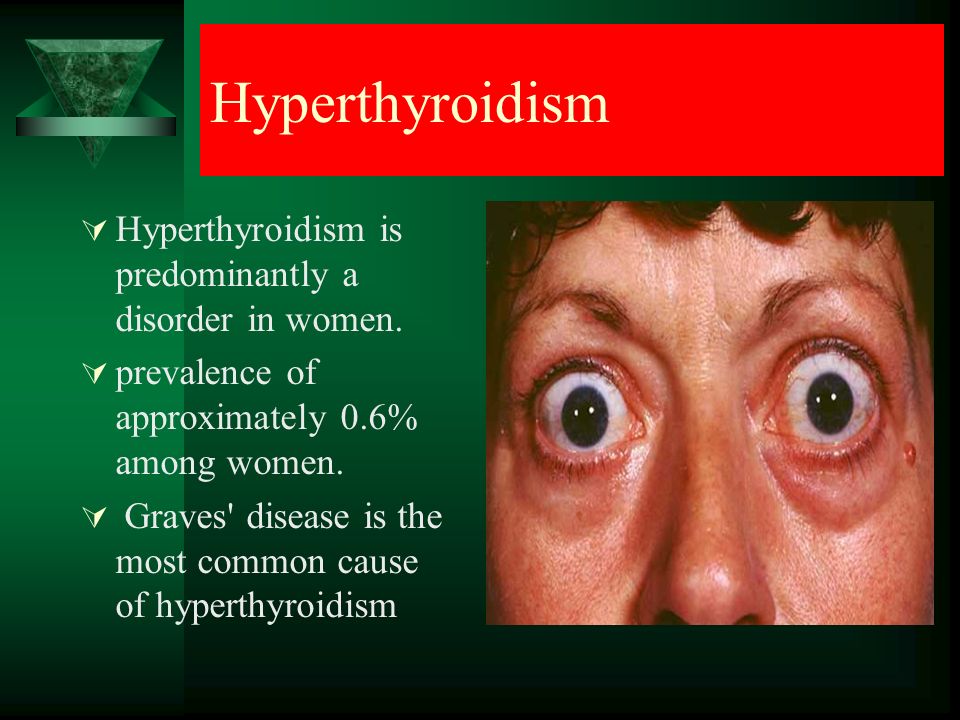 As a matter of priority, it is important to recover euthyroidism , ie the normal functioning of the thyroid as soon as possible in order to relieve the patient and avoid complications . Treatment with antithyroid drugs or radioactive iodine generally achieves this goal in a few months, depending on the severity of the hyperthyroidism.

In case of failure of these treatments, surgical removal of the thyroid is sometimes considered.

Each of these solutions has advantages and disadvantages and the person will have to ask his doctor to make the best decision for his case.

These drugs (propylthiouracil or methimazole) prevent the production of new thyroid hormones without causing permanent damage. They restore a normal level of hormones after 2 to 4 months of treatment. Often, the medication should be continued for 1 ½ years. Hyperthyroidism sometimes occurs again.

This treatment often causes a permanent state of hypothyroidism. Hypothyroidism is much easier to treat than hyperthyroidism. Synthetic thyroid hormones in the form of tablets taken daily and for life can correct hypothyroidism (Eltroxin, Levothyroid or Synthroid), without causing any adverse effects.

The pregnant women or nursing mothers can not receive such treatment because radioactive iodine can impair the function of the thyroid gland of the fetus or newborn.

Ablation of the thyroid

Total or partial removal of the thyroid gland by surgery (thyroidectomy) may be considered, but is rarely used.

The eye disorders that accompany Graves’ disease, when severe, may require treatment with corticosteroids (to reduce inflammation behind the eye) or surgery (to reduce pressure in the eye). It could be that smokers respond less well to these treatments . Moreover, it is strongly recommended not to smoke in case of ocular symptoms caused by Graves’ disease.