Hypospadias, sometimes called hypospade, is a congenital anomaly in boys where the opening of the urethra is not at the tip of the penis, but elsewhere along the urinary canal at the level of the penis. This urethral closure defect is one of the most common congenital malformations in humans, with an estimated prevalence of between 1 and 10 boys per 1000 births, according to the sources. Doctors sound the alarm because, like other genital malformations such as micropenis, its prevalence has risen sharply in recent decades and could be linked to overexposure to endocrine disruptors contained for example in pesticides. This condition requires surgery. 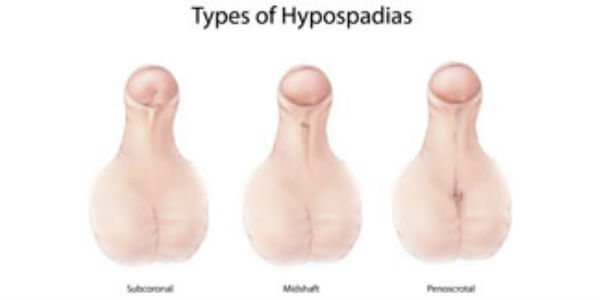 A hypospadias can be accompanied by other disorders: a micropenis , a curved penis, an abnormal urination of the urine requiring sitting to urinate, testicular ectopia (a testicle has not completely descended into the scrotum).

Hypospadias is the result of a developmental defect during weeks 8 to 14 of pregnancy. It is due to an insufficient masculinization of the boy’s genitalia causing a divergence of the spongy body, the erectile part of the penis surrounding the urethra. In many cases, the cause of hypospasias is not identified. It would be a combination of genetic and environmental factors. It may, however, be a hereditary congenital malformation, but this family form represents only 10% of all cases of hypospasias.

Several risk factors are identified such as the use of progestin-only hormone therapy during the first months of pregnancy, age (over 35 years) or overweight of the mother. Recent studies put into question the in utero exposure of the fetus to certain endocrine disruptors, contained in particular in paints and solvents, detergents and pesticides. The results of a study conducted by the team of Charles Sultan, professor in pediatric endocrinology at the University Hospital of Montpellier, made a lot of noise in the press.

Prevention and treatment of hypospadias

Surgical intervention, when necessary, is performed in the first months of the infant’s life, usually between 3 and 18 months of age. Several types of surgery are possible, depending on the type and severity of the hypospadias. Spongioplasty is often preferred. It can be done in several stages: correction of the spongy divergence, placement of the opening of the urethra at the right place, correction of the curve of the penis, repair of the skin around the opening of the urethra. A baby with hypospadias should not be circumcised because the foreskin can be used by the surgeon. Unoperated hypospadias can lead to problems such as difficulty in urinating or complicated interpretation of intercourse.