Voltage or high blood pressure is the force exerted by the blood on the walls of arteries. The blood pressure is characterized by a blood pressure abnormally low. It is, in a way, the opposite of hypertension. This low pressure can be permanent or transient, occasional or frequent. It is not an illness as such, but rather a symptom. The causes of hypotension are multiple: neurological problem, side effect of a drug, dehydration, etc.

The sudden drop in blood pressure may be accompanied by dizziness and weakness for a few seconds and sometimes fainting. These symptoms usually appear after getting up quickly from a chair or bed. Like heart rate or body temperature, the pressure must be kept relatively constant to ensure proper functioning of the body.

People of all ages may have occasional symptoms of hypotension, including healthy young adults. People over the age of 65 are, however, those who suffer most often. In 20% of them, the phenomenon occurs regularly and can have several causes. It is important to consult a doctor to find the cause or causes. Bedridden people and pregnant women are also more prone to it.

The pressure is considered normal if it is less than or equal to 120/80 or 115/75, depending on the country. However, blood pressure figures vary greatly from person to person, as well as during the day depending on the activity. At rest, many healthy people have slightly lower blood pressure than normal. This is generally the case for athletes and people who train regularly. This is a sign of good cardiovascular health. Thus, it is generally considered that the lower the pressure, the better.

However, below a certain limit, the pressure is too low to propel the blood properly into all the blood vessels. This has the effect of not oxygenating enough parts of the body, especially the brain. This causes vertigo and fainting.

Blood pressure is controlled by multiple mechanisms, governed by the autonomic nervous system (which is not controlled consciously). Normally, pressure drops, for example when moving from sitting to standing, are rapidly corrected by reflex reactions (increased heart rate, narrowing of the opening of small blood vessels, etc.). For these reactions to take place, the pressure drop must first have been detected by blood pressure sensors housed in the artery walls, called baroreceptors (see diagram).

There are various forms of hypotension, the causes and symptoms of which vary. Here are 2 common forms of transient and unsupported hypotension that affect the older population more. 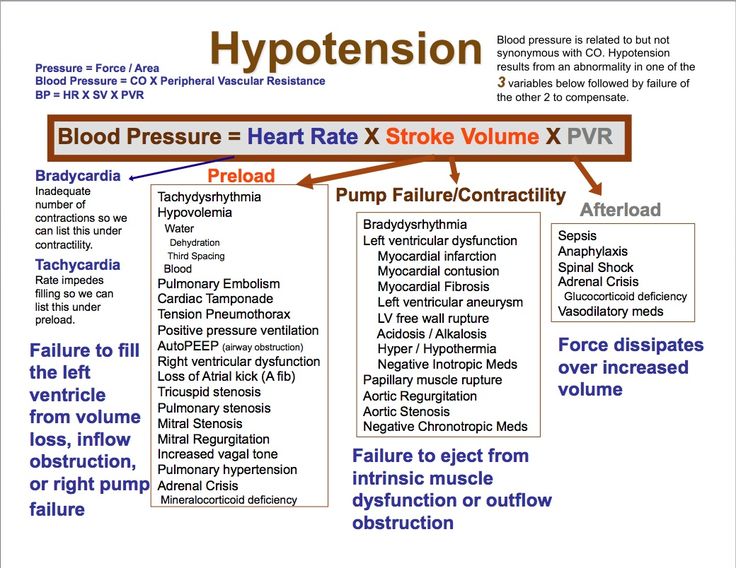 The symptoms of this type of hypotension arise after a too fast lifting of the bed, a chair, a squatting or bending position. Under the sudden effect of gravity, the amount of blood reaching the brain temporarily decreases. This leads to dizziness, visual disturbances, sometimes even a fall. Orthostatic hypotension is common in the elderly. While it is found in 5% to 10% of the general population, it affects 15% of people over 65 and 30% of those over 75.

Most of the time, there is no obvious cause and these are trivial cases. When hypotension is common, it is necessary to consult a doctor. It can be a neurological problem disrupting the regulation of the nervous system that controls blood pressure. In the elderly, however, the most common cause is taking a medication. Here are the most common causes of orthostatic hypotension.

It is characterized by a significant drop in blood pressure within 2 hours after the start of the meal, causing dizziness, nausea, fainting or falling. After each meal, the process of digestion causes an influx of blood to the stomach and intestines; this may result in a slight decrease in blood pressure. In the elderly or weakened by the disease, this slight drop in pressure is enough to trigger symptoms of hypotension. Symptoms appear from 15 minutes to 2 hours after the meal.

Postprandial hypotension is more common in diabetes, heart or kidney failure or Parkinson’s disease. It mainly affects the elderly with hypertension also.

It should be noted that severe hypotension may occur in the event of significant blood loss (haemorrhage), anaphylactic shock or generalized infection (sepsis). These situations require emergency medical care.

Unlike hypertension, there is no threshold value that defines hypotension. If there are no symptoms, the lower the blood pressure, the better the cardiovascular health. To make a diagnosis, the doctor relies heavily on the symptoms. However, these usually occur when the systolic pressure is below 100 or 90 mmHg (millimeters of mercury). A proof of orthostatic hypotension can be obtained if, by rapidly passing from the supine position to the upright position, the pressure drops more than 20 mmHg systolic 10 mmHg diastolic. As for postprandial hypotension, it is generally defined by a decrease in systolic blood pressure of at least 20 mmHg while lying in the 2 hours following the start of a meal.

Most of the time, occasional periods of low blood pressure are not serious and do not require consultation with a doctor. However, if they are very frequent, if the symptoms are troublesome or if the pressure remains always at too low levels (<90 mmHg), it is better to consult.

A low blood pressure that does not cause symptoms or produces brief moments and infrequent dizziness when getting up usually does not require treatment.

The treatment of hypotension greatly depends on the underlying cause. Changing lifestyle habits is usually enough (see Prevention section).

When hypotension is constant and associated with medication, your doctor may advise you to stop or reduce medication.

When orthostatic hypotension significantly reduces quality of life and precautionary measures do not reduce symptoms, medications may be prescribed. They act either on the nervous system or on the control of blood volume.

The most commonly prescribed medication is fludrocortisone (Florinef): it causes an increase in blood volume. Midodrine can also be used 30 minutes before sunrise, for example, and then at 2 or 3 times of the day. In mild hypotension, pyridostigmine may also be prescribed. In addition, medications that slow stomach emptying (for example, acarbose) can help treat post-meal hypotension in people with diabetes. In all cases, close supervision should be done by the doctor to avoid sudden increases in blood pressure. As a last resort, placement of a pacemaker may help with treatment by increasing the baseline heart rate.