The intestinal polyps are outgrowths forming on the lining inside the colon. They occur in 30% to 50% of adults in industrialized countries. Environmental and dietary factors probably play a role in their appearance.

So-called adenomatous polyps or adenomas are precancerous lesions representing about 70 to 75% of polyps. They are likely to progress to colon cancer.
Other types of polyps do not progress to colon cancer. These are hyperplastic polyps, hamartomatous (juvenile or Peutz-Jeghers) or inflammatory polyps.
Polyps are usually a few millimeters in diameter , sometimes more than one centimeter. They are detected by blood screening in the stool (fecal occult blood test or FOBT), and by colonoscopyexamination also allowing them to be removed most often.

Intestinal polyps usually cause no symptoms . However, they are routinely removed when they are detected as a preventive measure against colon cancer. 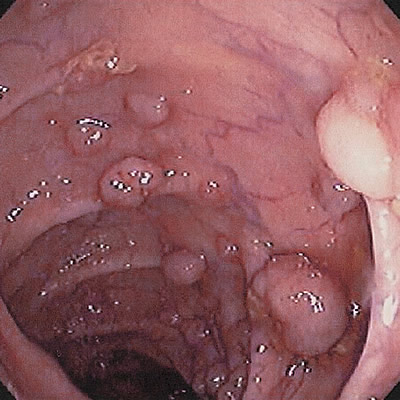 Adenomatous type polyps are transformed into colon cancer very gradually in 10 to 20 years.

The earlier they are removed , the lower the risk of transformation into cancer.

– From the age of 50 , intestinal polyps must be detected in each of us. Nobody should escape. For this, we have a screening test to ask the attending physician who distributes it for free. This test detects blood in the stool. It must be done again regularly every two years if it is normal.
– In case of abnormal screening test (4% of cases), that is to say blood detection in the stool, a colonoscopy is performed, allowing to remove the polyps if there are any. Most often, there is nothing (the blood in the stool is related to anything else like hemorrhoids or an anal fissure for example), but in 30% of cases polyps are present. In 8% of cases, there is colorectal cancer, often at an early stage.
– In the case of polyps that have been removed, it is generally necessary to have a new screening colonoscopy 5 years later or otherwise, according to the doctor’s recommendation.
– In case of family disease  : Some families suffer from familial polyposes, genetic diseases causing a large number of polyps at very high risk of becoming cancer. When a person has this type of illness, it is important to closely monitor their close relationship.
– When one suffers from Crohn’s disease or ulcerative colitis after the 8 Th or 10 thyear of illness according to evolution. Regular colonoscopy is performed with biopsies because these diseases increase the risk of colon cancer. Nevertheless, this cancer occurs more often on a flat lesion rather than on polyps as in the rest of the population. These lesions resemble polyp lesions under the microscope, but are often more difficult to see in colonoscopy, resulting in systematic sampling every 10 cm.

The symptoms of intestinal polyps

In general, intestinal polyps, especially the small ones, do not cause any symptoms , hence the importance of undergoing screening and colonoscopy if necessary. However, polyps can cause the following symptoms:

– Bleeding through the rectum;
– Blood in the stool;
– Changes in bowel habits that last more than a week (eg constipation or diarrhea);
– Abdominal pain.

Anyone can suffer from intestinal polyps. Certain risk factors, however, play a significant role in their appearance:

– To be over 50 years old,
– To have a first-degree relative suffering from colorectal cancer,
– To have already had a colorectal cancer,
– To have already had intestinal polyps,
– To be part of a family with polyposis family,
– Suffer from chronic inflammatory bowel disease, such as Crohn’s disease and ulcerative colitis (ulcerative colitis).
– Overweight or obesity;
– Smoking and high alcohol consumption;
– Diet high in fat and low in dietary fiber;
– Sedentary lifestyle;
– Having acromegaly 2 to 3 times greater risk of adenomatous polyp and colon cancer.