The lead is a heavy metal bluish gray and toxic to humans. When ingested, its most severe effects are on the central nervous system but it can also reach red blood cells and the digestive system.

Lead can enter the body through the mouth or lungs. The degree of assimilation of lead varies from one person to another, depending on the state of health.

The toxicity of lead contamination must be clearly distinguished . It is a question of contamination with lead when an exposure to this metal generates in the blood a lead level higher than normal, without causing symptoms. If the contamination is large enough to cause symptoms, then it is called lead poisoning .

The adults are the main victims of contamination and lead poisoning. But when young children are affected, their health is particularly at risk . Very small amounts of lead can hinder their cognitive development and cause attention problems. The concern is even greater that young children absorb from 5 to 10 times more lead than adults. Their habit of bringing everything to their mouths could partly explain this phenomenon. In addition, a significant proportion of the metal introduced into their bodies, about 25%, remains in circulation and exerts its neurotoxic effects. In comparison, in adults, only 5% to 10% of absorbed lead remains in circulation. The rest is fixed in the bones and teeth. 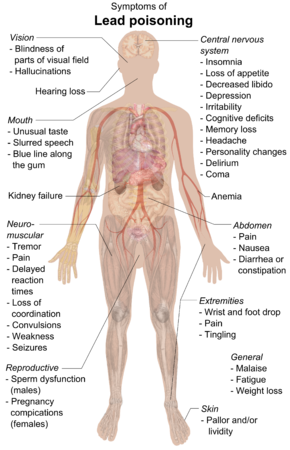 Poisoning may be acute, resulting from brief exposure to very high levels of lead or chronic , due to prolonged exposure to small amounts of lead. Lead poisoning, whether acute or chronic, is also known as lead poisoning.

The lead poisoning is often diagnosed after a screening conducted in the workplace . The attending physician may also suspect lead poisoning based on the symptoms and possible sources of lead to which the patient is exposed. In this case, a test is also passed to the relatives of the patient who could also be victims of lead poisoning.

To carry out the test, a blood test is performed which detects the level of lead in the blood (blood lead). The result is given in micrograms of lead per deciliter of blood (μg / dl) or in micromoles of lead per liter of blood (μmol / l). Blood lead levels mainly reflect recent exposure to lead. Nevertheless, studies indicate that old exposure slightly raises blood lead levels.

Blood lead levels, estimated to be safe for health, have been steadily decreasing in recent decades. Currently, if an individual has a blood lead level equal to or greater than 10 μg / dl (or 0.5 μmol / l), his doctor is obliged to notify the public health authorities. This mandatory reporting threshold was proposed by the US Centers for Disease Control in 1991 and was subsequently adopted by the Quebec public health authorities. Exceeding this threshold does not always cause symptoms of toxicity.

Some experts believe that mild cognitive impairment may occur below this limit and that there may be no safe threshold of exposure, especially in children. In fact, a study of 1,987 American adults aged 20 to 39 indicated that subjects with the highest lead (2.1 μg / dl) were twice as likely to suffer from depression and 5 times more panic disorder than those with the lowest rate (0.7 μg / dl or less). 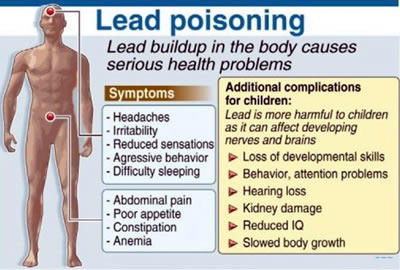 Magnitude of the problem

In North America and most industrialized countries, the presence of lead in the environment has dropped since the 1970s. Many countries have restricted the use of lead, particularly in gasoline, because of its harmful effects on health.

In Quebec, 200 to 500 cases of lead contamination are reported each year, mainly in exposed adults in their workplace(including metal processing plants or recycling of lead-acid automobile batteries). These people are not all intoxicated, that is, they do not all have symptoms.

According to Health Canada, lead poisoning is very rare in children . In these, it would occur mainly near existing or old foundries.

On the other hand, people born before the 1970s, when lead was used more often in industry, could be negatively affected. Indeed, exposure to lead could contribute to the onset of diseases usually associated with aging(hypertension , kidney problems , cataracts, and memory problems). For now, this is still a hypothesis. It is also not known whether these effects are reversible. Osteoporosis could cause lead accumulated in the bones during childhood to be released later into the bloodstream. Indeed, it is known that from 90% to 95% of absorbed lead is fixed in the bones, in the same way as calcium.

Some industrial sectors still use lead. For example, it is still involved in the production of steel and brass, as well as in the manufacture of electronic products and accumulators for automobiles. In addition, some thermal power plants, particularly coal-fired, continue to release lead into the ground, into the air and into the water. Remember that the lead emitted into the environment in the past does not deteriorate.

Note. Amalgam used in dentistry, commonly known as ”  fillings  “, does not contain lead, but 50% mercury and an alloy of metals (silver, tin, zinc and copper).

Here are the sources of lead that can lead to lead contamination or poisoning:

The following damages, if any, usually occur at school age:

At a higher degree of exposure, the following symptoms may also occur:

Chronic exposure to lead does not result in easily detectable symptoms. But it could increase the following risks:

People at risk for Lead intoxication

In the majority of cases, no medical treatment is indicated. The most important intervention is to detect and avoid further exposure to lead. This may require the home inspection by a professional. Medical follow-up is usually undertaken every 3 to 6 months.

In cases of severe acute intoxication , chelating agents such as succimer or EDTA(ethylenediaminetetraacetic acid) are used. They are injected into the veins where they bind to the lead molecules in the blood, and then are excreted in the urine. They can reduce blood lead from 40% to 50%. The number of treatments depends on the severity of the intoxication. With EDTA, the treatment lasts on average 5 days. It should not be unduly prolonged as the chelating agent also binds to minerals beneficial to the body, such as iron and zinc.

Note that chelation may involve risks important because lead is recirculated in the body. In addition, allergic reactions may occur. Few studies have evaluated the effectiveness of this treatment in reducing immediate symptoms and preventing the long-term effects of lead poisoning. The decision to use this type of treatment should always be made by talking to a doctor experienced in this area.

In parallel, the doctor recommends a healthy and nutritious food and if need supplements of calcium or iron.