Leishmaniasis is a zoonotic disease that affects animals and is transmitted to humans. We should rather speak of leishmaniasis because this disease of parasitic origin groups three families very different in terms of symptoms and their location. We distinguish:

In all three cases, it is a parasitosis, disease due to the contamination of the body by a parasite, the “leishmania” of which there are several families that will determine the type of attack: Leishmania donovani and infantum for the visceral form, Leishmania tropica especially for the cutaneous form, and Leishmania braziliensis for the mucous form. The parasite elects home in some white blood cells of their host, macrophages, cells responsible for cell destruction (phagocytosis).

This parasite is transmitted to humans by an insect, a kind of mosquito called sand fly, or sand fly. Only the female feeds on blood (it is said that she is a hematophagus). She gives herself the blood of the individuals she stings at dusk, and if she is infected, she also transmits the parasite that will invade their blood.

The natural reservoir of the parasite Leishmania infantum is the dog (as well as the wild canids: foxes, jackals …), and also the cat or the hare. In other words, the sandfly is infected by pricking an infected animal, and then transmits the disease to humans.
Affected bitches can transmit the parasite to their litters.
For Leishmania donovani and Leishmania tropica, the natural reservoir is man. An infected human, if bitten by a phlebotome mosquito, can transmit the parasite to other people.
And since the immunodeficiency of HIV / AIDS increases the risk of leishmaniasis by 100, people living with HIV / AIDS are important reservoirs of parasites.
Direct human transmission can be done only through blood, for example through the exchange of syringes among drug addicts.
Sexual transmission is possible.
Incubation

Incubation, ie the time between the first contact with the parasite and the appearance of the first signs of leishmaniasis, varies greatly depending on the form: 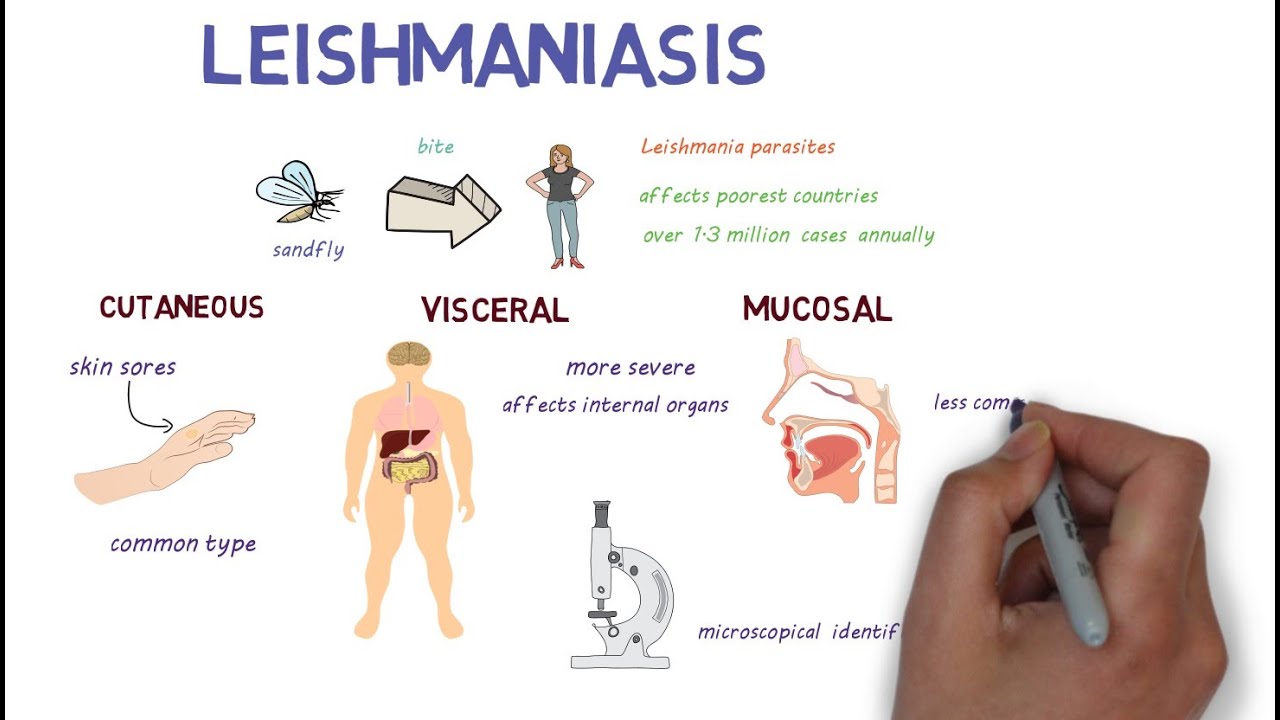 Leishmaniasis occurs in tropical and subtropical areas, encompassing 98 countries, most of which are in development. An estimated 350 million people are exposed. There are 12 million cases worldwide, for 30,000 deaths (visceral form especially). Each year, there is 1.5 to 2 million new cases. The HIV / AIDS epidemic is contributing to the increase in the number of annual cases.

Whatever the form, children, the immunocompromised (especially HIV) are particularly vulnerable.

The symptoms of leishmaniasis

The symptoms depend on the form of leishmaniasis. Often, the sting goes unnoticed.

The risk is not the same depending on the region concerned (the disease also concerns travelers), the time of year and even during the day:

Another major risk factor for visceral leishmaniasis is immuno-depression (HIV, transplants, haemopathies …). In an HIV-positive person, leishmaniasis can be considered an opportunistic disease.

At present, there is no prophylactic (preventive) treatment and human vaccination is being studied.

The prevention of leishmaniasis includes:

The drug treatment includes antiparasitic drugs derived from antimony such as Glucantime (N-methyl-glucamine) or Pentostam (stibiogluconate), intramuscular injection (painful). Pentacarinat (pentamidine isethionate), certain antifungals (against fungi) such as fluconazole, ketoconazole or amphotericin B, and Impavido (miltefosine) are also used. Finally, interferon-gamma treatment with an antimony derivative appears to be effective in some forms of leishmaniasis.