Leptospirosis is an infectious disease caused by a bacterium of the genus Leptospira.It is an animal-transmitted infection, a zoonosis, and is the most common zoonosis in the world. Animals transmitting the disease are most often rodents harboring the bacterium in their kidneys and eliminate it by urinating, hence a nickname given to leptospirosis: the rat disease. Transmission is to humans through contact with water, soil, or food contaminated with the urine of infected animals. Leptospirosis is rare in temperate climates, and much more common in tropical countries (France overseas, Latin America, Southeast Asia), with an upsurge in summer and autumn. It is estimated that more than 500 000 human cases of severe leptospirosis occur each year worldwide, although there are also mild forms with little or no symptoms,

In metropolitan France, around 300 people are affected each year by this disease.

Symptoms of leptospirosis occur between 4 days and 2 to 3 weeks after infective contact. Most often, they resemble those of influenza with:
– fever (usually over 39 ° C),
– chills,
– headache,
– muscle, joint, abdominal pain.
– haemorrhages can also occur.
In the most serious forms, it can appear, in the following days:
– jaundice characterized by a yellow coloration of the skin and the white of the eye,
– a failure of the kidneys,
– a failure of the liver,
– an attack pulmonary,
– cerebral infection (meningitis),
– neurological disorders (convulsions, coma).

In contrast to severe forms, there are also forms of infection without any symptoms.

If convalescence is long, there are usually no sequelae apart from the possibility of late ocular complications. However, in severe forms, untreated or treated with delay, mortality exceeds 10%.

In all cases, the diagnosis is based on symptoms and clinical signs, blood tests, or even the isolation of the bacteria in some samples.

In the early stages of infection, only the detection of DNA, that is, the genetic material of the bacterium in the blood or other body fluids, can lead to the diagnosis. The search for antibodies against leptospirosis remains nevertheless the most used examination, but this test is positive only after a week, the time that the organism manufactures antibodies against this bacterium and that they can be in quantity sufficient to be dosable. It may therefore be necessary to repeat this test if it is negative because done too early. In addition, the formal confirmation of the infection must be made by a particular technique (microagglutination test or MAT) which, in France, is carried out only by the national reference center of leptospirosis.

Rodents are the main vectors of leptospirosis, but other animals are also likely to transmit this disease: some carnivores (foxes, mongooses …), farm animals (cows, pigs, horses, sheep, and goats) or company (dogs) and even bats. All these animals harbor the bacteria in their kidneys, most often without being sick. They say they are healthy carriers. The human being is always contaminated by contact with the urine of these infected animals, either in water or soil. The bacterium usually enters the body through the skin when there is a scratch or cut, or through the nose, mouth, eyes. It can also be infected by drinking water or food in which the bacteria are present. Sometimes,

All people living or staying in tropical areas with higher disease rates are at increased risk for leptospirosis.
– People who work outdoors,
– Those who take care of animals (veterinarians, farmers, animals, military, …) are also more at risk,
– Sewer workers, garbage collectors, maintenance managers of channels, employees of treatment plants,
– fish farmers,
– workers in the rice field or sugar cane field …
Some activities are also at risk such as:
– hunting,
– fishing,
– agriculture,
– the animal husbandry,
– gardening,
– horticulture,
– work in the building,
– roads,
– livestock,
– slaughter of animals …
– Recreational activities in fresh water: rafting, canoeing, canyoning, kayaking, swimming, especially as a result of heavy rainfall or floods. 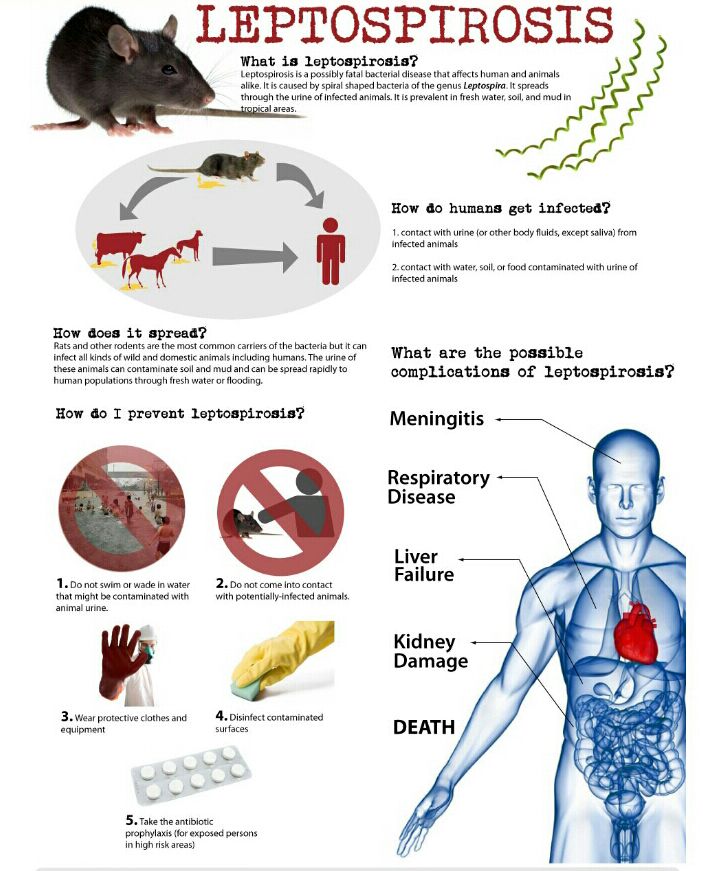 To reduce the risk of developing leptospirosis,
avoid: contact with water or wet soils that may be contaminated:
– avoid swimming in fresh water, especially after flooding or flooding;
– to protect the cutaneous wounds by waterproof bandages before entering the water; – wear protective clothing and footwear when working or walking in water or on wet ground;
– if there is a greater occupational risk, use appropriate protective equipment (goggles, gloves, boots, overalls).

Avoid contact with wild animals, especially rodents, and in some cases with pets.

From a general point of view, prevention measures are needed at the collective level:
– rat control,
– waste management,
– control of effluents from industrial farms,
– drainage of flooded areas…

In France, there is also an effective vaccine against a major strain of pathogenic Leptospira. It is proposed to especially exposed workers such sewer workers and garbage collectors. Similarly, dogs are usually vaccinated against leptospirosis.

The treatment of leptospirosis is based on the administration of antibiotics, for at least 10 days. In severe forms, this is usually done in the context of hospitalization in a resuscitation unit. The sooner this treatment is administered, the better the course is, with fewer symptoms and complications as well as carriage of the bacteria.

Leptospirosis is not a notifiable disease in France. On the other hand, it can be considered as a compensable occupational disease.