This syndrome increases the risk of developing certain types of cancers, particularly cancers of the colon (large intestine) and rectum, hence its name of colorectal cancer.

Some people may also have this syndrome without the onset of the disease: this is the mild form. In this case, we will talk about colon polyps. These are usually benign tumors that develop within a mucosa. Here, these polyps develop in the intestinal mucosa of the colon. These “benign” patients have earlier intestinal disorders, but fewer consequences compared to people with hereditary non-polyposis colorectal cancer in its general form.

People with Lynch Syndrome are more concerned about the potential development of colorectal cancer, especially if it develops before age 50.

The localized tumor in the colon or rectum is generally treated by surgery. A sample of the tumor tissue is then analyzed to determine if it is caused by Lynch Syndrome.

The diagnosis of the disease is based on a set of criteria.
In cases where a colorectal cancer is diagnosed in a person, tests are conducted to determine the origin and possibly the underlying presence of Lynch syndrome.

There is an additional risk that the tumor will be caused by Lynch Syndrome if:
– at least 3 persons from the same family have been diagnosed positive for the development of Lynch Syndrome-related cancer;
– the patient is related in two generations and in the first degree with people who developed the disease;
– the cancer developed before the age of 50 years.
The symptoms associated with the pathology mainly affect the intestines.
The clinical manifestations result in:
– an intense and unexplained tiredness;
– disorder and unusual intestinal pain: bleeding in the stool, mucus in the stool, etc.
– unexplained weight loss.
In addition to these disorders, women may also have bleeding from the uterus.

The diagnosis of uterine cancer in women may be the underlying cause of the development of Lynch Syndrome.

A visit to a general practitioner is highly recommended if the presence of these symptoms is significant. In this way, he or she can direct the diagnosis towards the detection of a Lynch syndrome or refer the person to a geneticist to confirm or not the development of HNPCC. 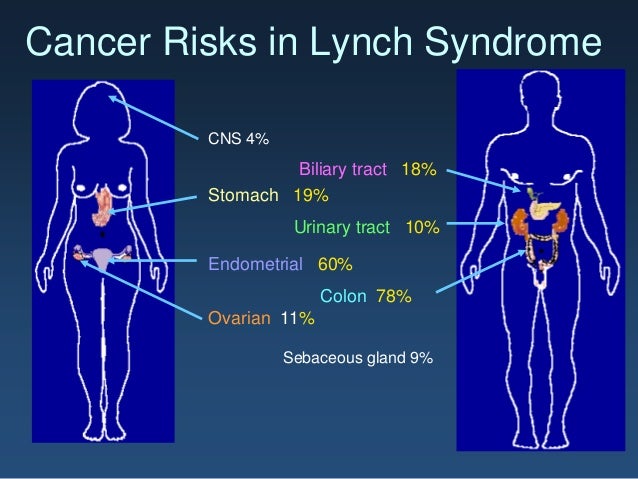 Lynch syndrome is a hereditary disease.
The origin of this disease is therefore a genetic transmission of the autosomal dominant type.

The mutated genes involved in the development of the disease are part of the family of DNA repair genes. Indeed, during DNA replication, nucleotide base mismatches (basic elements of the double-stranded chain of DNA) can occur. In this sense, repairs of these mismatches (pairs of association defects) are possible. These anomalies corrections are effective by proteins derived from the genes: MSH2, MLH1, MSH6 and PMS2.
Mutations in these genes increase the risk of developing Lynch syndrome.
Indeed, these mutations thus prevent the correction of the errors committed during the replication of the DNA. This results in the accumulation of errors in the genome and the continuous development of abnormal cells. This phenomenon leads to the development of a tumor.

Mutations within the EPCAM gene can also lead to the development of the disease. Indeed, this gene is closely linked to the MSH2 gene and can thus deactivate it. This leads to disturbances in DNA repair and thus an accumulation of genetic errors.

Although these genetic mutations predispose people to the development of Lynch syndrome, not all of them cause it.

Lynch syndrome is transmitted autosomal dominantly. That is, the presence of at least one mutated allele for these genes can lead to the development of the diseased phenotype.
Or, if a person has the mutated allele for one of these disease-related genes, that person has a 50% risk of passing it on to his offspring.

Lynch syndrome is an inherited genetic disease with autosomal dominant inheritance.
That is, the presence of a single copy of the mutated allele for disease-related genes in a person is sufficient to develop the diseased phenotype.

In this sense, the presence of the mutated allele in one of the parents leads to a 50% risk of the child developing the pathology.

Prevention and treatment of Lynch Syndrome

A differential diagnosis can be established from the various symptoms associated with the disease (intestinal symptoms, intense and unexplained fatigue, etc.).

The result is a diagnosis based on the genetic heritage of the family. Indeed, the presence of at least one mutated gene in an individual may lead to an increased risk of transmitting the disease to the offspring by up to 50%.
When diagnosed positively for the presence of mutations in the MSH2, MLH1, MSH6, PMS2 or EPCAM genes, colonoscopic monitoring is strongly recommended from the age of 20 years.
A gynecological follow-up is also prescribed in women after 30 years.

As this disease is genetically hereditary, there is no preventive treatment.

The treatments associated with this syndrome are similar to those of other colorectal cancers.
Be:
– surgery, on the basis of colonic resection and lymph node dissection;
– chemotherapy, used in cases of metastatic colon cancer.