Malaria is a life-threatening diseasecaused by parasites. The parasites of the genus Plasmodium are transmitted by Anopheles mosquitoes infected type, which usually bite at night.

The disease is present mainly in the tropical regions of Africa and Southeast Asia. But it can also be found in many countries, such as Mexico, Central America, South America, the Middle East, Turkey, Pakistan, India and several Asian countries such as China.

There are four types of human malaria. The two most common are Plasmodium falciparum (the most lethal) and Plasmodium vivax. Plasmodium malariae and Plasnmodium ovale are also found.

Malaria can be cured. By following an appropriate treatment, the parasites can be eliminated entirely from the body of the affected person. The parasite types, P. vivax and P. ovale have stages of the parasite that can remain in the liver without causing symptoms. If they are not treated with the right treatment, the right dosage, these stages can be reactivated and cause a relapse of the disease, even after several months or years. The P. malariae type can also remain in the blood for decades if not treated.

In recent years, monkey malaria (Plasmodium knowles) has been recorded in humans in some forests of Southeast Asia. 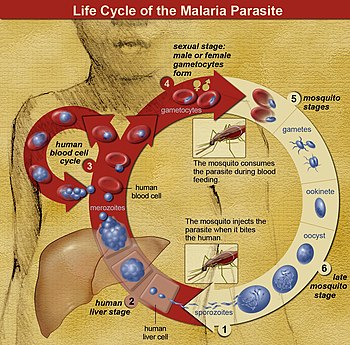 Anopheles mosquitoes become infected when they bite a person with malaria. The small amount of blood they collect contains parasites. These mix with their saliva and are in turn injected to the next person they bite.

In the human body, parasites reach the liver and can remain dormant for several days, up to several months (depending on the parasite involved). When the parasites are mature, they attack the blood cells. It is at this point that people with the disease experience the symptoms of malaria.

To ensure the presence of malaria, a diagnostic test can be performed. A drop of blood analyzed under a microscope makes it possible to identify the presence of the parasite.

Rapid diagnostic tests, in the form of test strips, detect the specific antigens produced by malaria parasites and present in the blood. These tests are usually used in the field by travelers or small organizations to quickly and effectively assess populations affected by the disease.

According to a report by the World Health Organization (WHO) dating from 2011, there have been nearly 216 million episodes of malaria in 2010, 81% in Africa and 13% in South Asia.

According to the WHO, since 2000, death rates attributable to malaria have dropped by more than 25% worldwide and by 30% in Africa. This progress has been made possible by measures to combat and prevent malaria in areas affected by the disease: large-scale use of mosquito nets, improved diagnostic tools, and improved availability of antimalarial drugs.

Since 2008, April 25 has been declared World Malaria Day to raise awareness of the global effort needed to effectively fight against this disease.

Most cases of malaria-related deaths are due to the consequences of the complications of the disease; it is estimated that 90% of malaria deaths occur in Africa, especially in children under 5 years of age.

The symptoms of malaria

The symptoms appear between 10 and 15 days after the bite of the infected insect. Some types of malaria parasite (Plasmodium vivax and Plasmodium ovale) may remain inactive in the liver for weeks or even months before the first signs occur.

Malaria is characterized by recurrent attacks including three phases:

An hour or two hours later:

Then, the body temperature drops:

Malaria infections of P. vivax and P. ovale may relapse within a few weeks or even months after the first infection even if the patient has left the infection zone. These new episodes are due to “dormant” liver forms.

People at risk for Malaria

Live or visit the tropical areas where malaria is common and where the strains present cause the most deaths, for example:

The prevention of malaria

Artemisinin, a substance isolated from natural mugwort (Artemisia annua) has been used for various infections in Chinese medicine for 2000 years. Chinese researchers began to take an interest in the Vietnam War when many Vietnamese soldiers died of malaria after stagnating in stagnant water marshes full of mosquitoes. However, the plant was known in some regions of China and administered in the form of tea at the first signs of malaria. Chinese physician and naturalist Li Shizhen had discovered its effectiveness in killing Plasmodium falsiparum in the 16th century. In 1972, Professor Youyou Tu isolated artemisinin, the active substance of the plant.

In the 1990s, as resistance to classical drugs such as chloroquine increased, artemisinin was a new hope for the fight against the disease. However, artemisinin weakens the parasite but does not kill it systematically. It is used alone first and then in combination with other antimalarial drugs. Unfortunately, resistance is gaining ground and since 2009, there has been an increase in the resistance of P. falciparum to artemisinin in parts of Asia. A struggle constantly to renew.

The emergence of malaria drug resistance to drugs is a worrying phenomenon. Not only does malaria cause a significant number of deaths, but the inefficacy of treatment can have important consequences for the long-term elimination of the disease.

Poorly selected or interrupted treatment prevents complete removal of the parasite from the body of the infected person. The parasites that survive, less sensitive to the drug, reproduce. By very fast genetic mechanisms, the strains of subsequent generations become resistant to the drug.

The same phenomenon occurs during mass drug delivery programs in highly endemic areas. The doses administered are often too weak to kill the parasite which develops resistance thereafter.

Malaria, for when a vaccine?

No vaccine against malaria is currently approved for human use. The malaria parasite is an organism that includes a complex life cycle and its antigens are constantly evolving. Many research projects are currently underway internationally. Among them, the most advanced is in the stage of clinical trials (phase 3) for the development of a vaccine against P. falciparum (the RTS, S / AS01) for infants 6 to 14 weeks. Results should be released in 2014.