The menopause is the end of the reproductive period of women , usually around the age of 50 years. It is marked by the cessation of menstruation and the cessation of ovulation and secretion by the ovaries of sex hormones ( estrogenand progesterone ).

The 2- to 7-year period before menopause is called perimenopause (not premenopausal). Ovulation becomes more irregular. The estrogen level can vary very significantly. It is during these transitional years that menstrual irregularities and uncomfortable symptoms appear: hot flashes, sleep disturbances, mood swings, and so on. 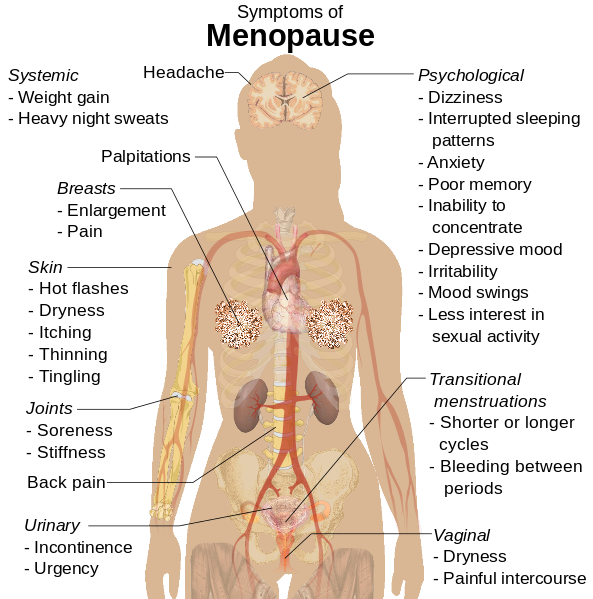 * Some use the term post-menopause to describe the period of time following menopause, which is not entirely appropriate since menopause is a definitive state. It will be said of a woman that she is “menopausal”.

The intensity of the symptoms varies from one woman to another: some have no other symptom than the cessation of menstruation , while others have symptoms of moderate to severe intensity (20 to 30%). women).

Note. After the menopause, even if the ovaries no longer secrete estrogen, the adrenal glands and adipose tissue (fat reserves) continue to release small amounts.

When menopause occurs before the age of 40 , it is considered premature. Premature menopause can occur spontaneously or be caused by illness, medication, surgery, or radiation therapy or chemotherapy.

For example, surgical removal of both ovaries causes menopause. On the other hand, removal of the uterus alone (hysterectomy) is not enough to cause menopause (because the ovaries continue to produce estrogen), but stops the menstruation. The cancer treatments, by chemotherapy or radiotherapy, can lead to a more gradual cessation of the rules. The effect of these treatments on the menstrual cycle depends on their potency. The rules can come back with the stop of the treatment.

The decline in estrogen makes women more at risk for various health problems, such as osteoporosis, stress urinary incontinence and cardiovascular disorders. This is one risk factor among others. To learn more about preventing these conditions, see these factsheets.

The symptoms of menopause

The symptoms are usually more marked during perimenopause . These symptoms are related to the hormonal changes that occur during this transition period, but also to aging. They are unpredictable and vary a lot from month to month.

People at risk for Menopause

People at risk of having more severe symptoms:

Factors that may influence the intensity of menopausal manifestations

Note.  The age at which menopause occurs is partly hereditary.

Menopause is the result of a natural evolution . However, studies conducted worldwide show that differences in lifestyle, diet and physical activity can influence the intensity and type of symptoms that women experience during menopause.

In general, we will put all the chances on his side by adopting the following preventive measures before 50 years, especially during the quarantine .

Moreover, as explained above, women, because they are menopausal, but especially because they are getting older, are at higher risk for osteoporosis, cardiovascular disease, cancer of the skin, endometrium and breast cancer. We will therefore take care to apply the preventive measures associated with these diseases.

A healthy lifestyle helps reduce the intensity of menopausal symptoms, improves cardiovascular and bone health, and provides some protection against many health problems.

Any form of physical activity is better than no physical activity. For all women, especially those entering this transition period, daily exercise has several important benefits:
– maintain or achieve a healthy weight;
– keep the cardiovascular system in shape;
– reduce the loss of bone density and the risk of falling;
– reduce the risk of breast cancer;
– stimulate sexual desire.

In addition, studies indicate that sedentary women are more likely to experience moderate to severe hot flashes compared to women who exercise regularly.

It is recommended to be moderately active for at least 30 minutes a day and to incorporate flexibility exercises into one’s routine: stretching, tai chi or yoga for example. For appropriate advice, consult a kinesiologist (the specialist in physical activity).

To combat the various problems associated with menopause, doctors resort to 3 types of pharmacological approaches:

The hormone supplements the hormones that the ovaries stop secreting. It allows the majority of women to see decrease or even disappear their symptoms (hot flushes, sleep disorders, mood changes) for the duration of hormone therapy.

It is important to know that most women who are undergoing general hormonal treatment will regain their symptoms when they stop treatment because the body will once again undergo a hormonal transition. Some women might, for example, make the decision to take hormone therapy for a few years and then decide to stop it at the time of retirement, knowing that it will be easier to manage their symptoms at this time of life.

General hormonal therapy usually uses a combination of estrogen and progestin . The estrogen aloneare reserved for women who have undergone removal of the uterus (hysterectomy) since taken over a prolonged period, they increase the risk of uterine cancer. Adding a progestogen reduces this risk.

Nowadays, hormone therapy is reserved for women whose menopause symptoms are pronounced and whose quality of life is sufficiently compromised to justify it. The Society of Obstetricians and Gynecologists of Canada recommends that physicians prescribe the lowest effective dose for the shortest period possible. The maximum recommended duration is 5 years .

Hormone therapy can help slow bone loss and reduce the risk of fracture. On the other hand, it should not be prescribed for this single purpose.

Sometimes hormone replacement therapy has non-dangerous, but unpleasant, side effects . Ask your doctor.

Some women take hormones on a continuous basis , that is, they take estrogens and progestins every day. Menstruation stops then. Generally, they do not resume when hormone therapy stops, if it lasted long enough. Other women take cyclic treatment , and take progestins only 14 days a month and estrogen each day. Hormone therapy taken cyclically generates “false menstruation” or withdrawal bleeding (not related to ovulation, as in the case of the birth control pill).

In Canada, equine conjugated estrogens (Premarin) have long been the most prescribed . These estrogens are extracted from the urine of pregnant mares and are administered orally. This is no longer the case. On 1 st  February 2010, Premarin was removed from the list of drugs covered by the public drug insurance plan in Quebec, because of a very significant increase in its selling price. (Premplus, a combination of equine conjugated estrogens and synthetic progesterone, has also been withdrawn.)

Since then, doctors can prescribe any of the following estrogens. These are tablets to take by mouth.

The bio-identical hormones have the same molecular structure as hormones secreted by the ovaries: estradiol-17 (the main estrogen produced by the female body) and progesterone. They are synthesized in the laboratory from plants such as soybeans or wild yams.

Bio-identical estradiol-17ß is administered cutaneously , which distinguishes it from conventional hormone therapy. It is obtained in the form of patches (Estraderm, Oesclim, Estradot, Sandoz-Estradiol Derm or Climara) or gel (Estrogel).

In addition to oestradiol-17ß , physicians who use bioidentical treatment usually prescribe micronized progesterone . The micronization technique turns progesterone into tiny particles that are well absorbed by the body. It is offered orally ( Prometrium ).

Bio-identical hormones have been prescribed for several years in Canada and France (the bio-identical name is however recent). At the time of writing, these drugs were covered by the Quebec public prescription drug insurance plan only in certain special cases. However, most private insurance plans pay them back.

Note . It is also possible to obtain over-the-counter products of masterful bio-identical estrogen preparations , in the form of a cream containing a compound of the 3 natural estrogenic molecules of women, namely estradiol, estriol and estrone. However, no scientific data has been shown to be effective and most doctors advise against this. Also in the pharmacy are master preparations of progesterone in the form of cream. These are formally discouraged. The absorption of progesterone by the skin is not very effective, varies a lot from one woman to another and does not allow to obtain an adequate concentration to protect the uterus. Recall that taking estrogen alone increases the risk of uterine cancer, and that the addition of progesterone serves to reduce this risk.

The application of small doses of vaginal estrogens is intended to relieve the symptoms of vaginal dryness and thinning of the mucous membranes. However, it has no therapeutic effect on hot flashes, sleep disorders and mood disorders. Local hormone therapy does not cause the side effects and risks associated with general hormone therapy.

Estrogens can be administered into the vagina with a cream , a ring or tablets . Their effectiveness is the same. Vaginal cream and tablets are inserted into the vagina using an applicator. The vaginal ring impregnated with estrogen is made of a flexible plastic. It fits at the bottom of the vagina and must be changed every 3 months. Most women tolerate it well, but some feel it is uncomfortable or sometimes has a tendency to move and exit the vagina.

At the beginning of treatment, when the vaginal mucosa is very thin, it happens that estrogen applied locally in the vagina diffuse into the body. However, no adverse health effects in the long term have been reported at the recommended doses.

Against hot flashes
Antidepressants . Studies suggest that some antidepressants may reduce hot flashes (but the effect is less than that of hormone therapy), whether or not there is underlying depression. This option may be an interesting choice for a woman who has depressive symptoms and hot flashes, but who does not wish to take hormones.
Antihypertensives . Clonidine, a medication used to lower blood pressure, has been shown to be slightly more effective than placebo in relieving hot flashes. However, this medicine is not widely used because it causes several side effects, such as dryness of the mouth, drowsiness and constipation.

Vaginal Dryness
Replens Moisturizing Gel has been shown to be an effective vaginal moisturizer to relieve itching and irritation as well as pain during intercourse. It applies every 2 to 3 days.

Against mood swings
the use of antidepressants, anxiolytics and sleeping pills should not be part of the arsenal of basic menopausal care. Their prescription must meet the same criteria and the same rigor as for any other period of life.

Against osteoporosis
several non-hormonal drugs are used to increase bone density and reduce the risk of fracture.

Studies suggest that women with active sex life have fewer symptoms of menopause than those who have little or no sex life active. But we do not know if there is a causal link or if it is a mere coincidence between the two.

Anyway, it is obvious that a menopause punctuated by many symptoms disturbs the sex life. However, one can still maintain an active and satisfying sex life by resorting to a vaginal hormone therapy, a vaginal moisturizer or a lubricant.

Remember that exercise can also arouse desire in women. To maintain active libido , it is also important to maintain good communication with the spouse and to manage stress in general (work, etc.).

Testosterone. The prescription of testosterone to menopausal women is still a marginal phenomenon in North America. However, more and more doctors are doing this to restore and stimulate libido, especially in women who have had both ovaries surgically removed. The potential side effects of using testosterone in women are still poorly understood. We must therefore consider this treatment as experimental.

The only official recommendation is the use of calcium and vitamin D supplements to fight osteoporosisin some cases. For more details, see the fact sheet on osteoporosis as well as those devoted to these two products.