The menorrhagia may concern only women between puberty and the menopause. Indeed, they (hyperménorrhées) correspond to abnormally abundant and prolongedmenstruation . This is the most common menstrual disorder reported by women. The amount of blood normally lost during menstruation averages 2 ounces (4 tbsp) and the usual duration varies from 3 to 7 days. A woman with menorrhagia can lose up to 3 oz (6 tbsp) or more and sometimes over a period of more than 7 days. Menorrhagia is sometimes accompanied by abdominal pain affecting the quality of life of women who suffer from it. In some cases, she may be responsible for anemia.

Nearly 1 in 20 women aged 30 to 49 years old consult a doctor each year because of menorrhagia. Of course, it’s still a subjective assessment, since it’s hard to measure the amount of blood lost during menstruation. 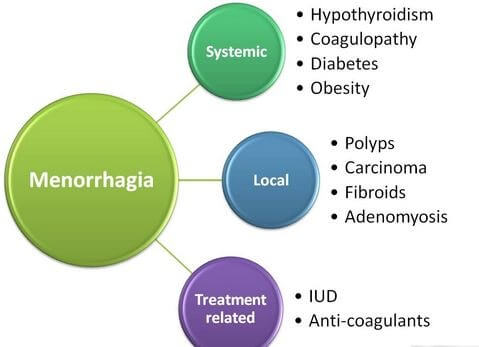 In addition to menorrhagia (which is an exaggeration of menstruation), unusual bleeding (more or less important) can occur between 2 periods of menstruation: if they are very light and occasional, we speak of ”  spotting  “; if they are important or almost permanent, they are called ”  metrorrhagia  “. They do not always have the same meaning as menorrhagia: menorrhagia are rules whose duration and abundance are important (always or recently); while spotting and metrorrhagia are bleeding that is not related to the cycle.

The presence of uterine fibroids (benign tumor of the lining of the uterus) can cause heavy periods(menorrhagia) and bleeding between periods (metrorrhagia) but also one or the other.

Note  : if menorrhagia can be painful, metrorrhagia and spottings, if light, are most often painless. The pain is produced by the contractions of the uterus and not by the bleeding itself and having pain does not mean that the bleeding is serious.

The periods are the elimination, at the end of an ovulatory cycle, the inner wall of the uterus (endometrium), consisting of abundant cells and blood. Menstruation is not a simple bleeding but a “moulting” of the inner lining of the uterus. This, to accommodate a pregnancy, must indeed be made up of “fresh” cells. When the ovulation of the month has not been followed by pregnancy, the fall of the hormones in the blood causes evacuation of the internal lining of the uterus and contractions of the uterus which detach the endometrium and expel it. . Once the menstrual period is over, the endometrium is reformed in the next cycle in anticipation of the next ovulation and

The most common source of unusual vaginal bleeding is hormonal fluctuation . The secretion of estrogen and progesterone influences the growth of the endometrium and ovulation; their drop in the blood causes the appearance of the rules. But it happens that ovulation does not occur (anovulatory cycle) or later. The endometrium then continues to form, until the uterus eventually expels it anyway. The endometrium has developed longer and therefore more and there is more thickness to eliminate, which results in menorrhagia .

The anovulatory cycles are common in early adolescence and the period of perimenopause , but they can also occur anytime until menopause. A delay in menstrual periods of a few days may be followed by more heavy menstruation than usual because ovulation has been delayed.

A late menstrual period of more than 15 days accompanied by significant bleeding can sometimes be a miscarriage . In this case, a pregnancy test is positive.

It should be noted that miscarriages occurring less than 3 months of age are almost always related to the non-viability of the embryo. A miscarriage usually does not translate into a fertility problem. Only if it occurs 3 or more times should an exploration be done. Other causes of menorrhagia or unusual vaginal bleeding :

Here are other possible causes, but rarer:

The bleeding sudden major or very painful can cause fainting or severe weakness. They then require emergency room consultation.

The pain is not necessarily related to the severity of the bleeding but especially to their abundance and the personal sensitivity of each woman.

Here are the signs that can alert menorrhagia and should lead to:

People at risk for Menorrhagia (hypermenorrhoea)

Treatment depends mainly on the cause and severity of bleeding , their impact on social and emotional life, the age of the woman, etc. The menorrhagia can be caused by a disease it is essential to diagnose and treat (uterine fibroids, polyps, infection, cancer, etc.). In adolescent girls and pre-menopausal women, menorrhagia is more common . In this case, measures can be taken if necessary to avoid iron deficiency anemia, the most common complication.

Having heavy periods can lead to worry, fatigue and frustration. But it is not necessarily serious or disturbing. It will be important to take the time to talk to your doctor and ask him all the questions that come to mind.

Nonsteroidal anti-inflammatory drugs . Nonsteroidal anti-inflammatory drugs such as ibuprofen (Advil, Motrin, Nurofen) reduce menstrual flow and reduce abdominal pain. They are very effective against the menorrhagia of girls, those who use copper IUDs, as well as the “spotting” and metrorrhagia that occasionally accompany contraception or hormone therapy (if spotting and metrorrhagia persist, you should consider changing the pill …)

Avoid taking aspirin as it contributes to bleeding.

Antifibrinolytic. These drugs can sometimes reduce bleeding but their effectiveness is inconsistent. They work by facilitating the coagulation of blood in small blood vessels.

Hormone therapy tablets . When the symptoms of menorrhagia are judged to be painful by the woman or are harmful to her health, a hormonal treatment may be prescribed: the low-dose contraceptive pill, synthetic progestins or natural progesterone (Utrogestan, Prometrium) in tablets.

Injections of medroxy-progesterone acetate (Provera). It is a contraception blocking cycles for about 3 months. This method is very little used. It is sometimes effective but may be accompanied by a temporary disappearance of menstruation or, on the contrary, irregular menstruation. In addition, unlike other treatments, it is not possible to stop the effects of a Provera injection once it has been done. The comfort of use of this method is therefore inconstant.

Intrauterine device with progestin . Progestins (progesterone-related substances) can be delivered directly into the uterus through an intrauterine device, the Mirena or Jaydess IUD.(smaller, for women who have not yet had children). It is implanted for a maximum of 5 years for Mirena and 3 years for Jaydess. It thins the wall of the endometrium and thickens the mucus of the cervix (which prevents sperm from entering the uterus), without the side effects associated with conventional oral hormone treatments. Its effectiveness in reducing menorrhagia (in the absence of a cause requiring treatment) is important if it is well tolerated and can be withdrawn at any time. It is normal for bleeding to occur randomly in the first few months. However, it sometimes has disadvantages with a risk of acne and weight gain in women who are overweight (or who have gained a lot of weight while on a pill or during pregnancy). Talk to your doctor about all these possibilities and ask them to describe the advantages, disadvantages and side effects.

When the hormonal treatments described above are not effective in reducing menstrual flow , the doctor may suggest danazol (Danatrol, Cyclomen) or a gonadotropin-releasing hormone (a hormone produced by the hypothalamus also called LHRH for luteinizing hormone- hormone releasing ). Danazol produces an artificial menopause by blocking the secretion of the ovaries. It causes most women to stop menstruation . These 2 drugs have side effects sometimes important, so they are used only as a second resort.

In a small number of cases, when the cause of bleeding is not known or cannot be treated with a drug, further investigations or surgical procedures may be offered.

Ultrasound. It is a simple and painless examination. It allows to visualize the shape of the uterus and to diagnose certain causes of bleeding (fibroma, polyp, endometrial hypertrophy , cancers ) or, on the contrary, to indicate that the uterus is perfectly normal and so to reassure on the benignity of the menorrhagia and other bleeding.

Hysteroscopy. This method has diagnostic and therapeutic functions. First, the hysteroscopy allows the surgeon to see on a screen the internal state of the uterus, which allows him to precisely determine the cause of menorrhagia (presence of polyps, cysts, etc.). It is by using a hysteroscope that the surgeon will make his observations. It is an elongated instrument equipped at its end with an optical system. Hysteroscopy is also used for removal of polyps and endometrial ablation.

Curettage . Curettage consists of scraping the superficial layer of the uterine wall. It is rarely used. It leads to a reduction in menstrual flow for the next few cycles, making it an effective approach in the short term only. It is reserved for cases that are refractory to other treatments or as a diagnostic means of last resort. This procedure also removes a uterine polyp.

hysterectomy. This is an operation to surgically remove the uterus. Traditionally, this removal of the uterus was common practice to stop heavy bleeding. Today, it is a treatment of last resort because other options are available to women. Hysterectomy offers a permanent solution, and can of course only be practiced in women who have definitively renounced any pregnancy. One in five women now undergo a hysterectomy in North America and one in 10 women in France before the age of 60 and in more than half of the cases, this intervention is done to treat menorrhagia. Hysterectomy requires general anesthesia. It can be done abdominally or vaginally, or laparoscopically (insertion of a thin flexible tube into the abdomen),

Hysterectomy is not a benign intervention: it can lead to chronic pain, sexual dysfunction, incontinence. It should only be performed if the bleeding is not controlled by another method or if it is true bleeding that endangers life.

Note. In all cases, iron supplements should be supervised by a health professional.