The elbow pain may originate from the joint itself, attached bone or tissue to the joint, such as tendons. This sheet focuses on the 2 most common types of elbow tendon injuries . They are commonly referred to as the tennis elbow and the elbow of golfer ‘s elbow , but they do not affect only these athletes. Usually, it is the fact of soliciting the wrist repeatedly or with unusual intensity that can become harmful.

These injuries most often affect people in their forties or fifties, and as many women as men.

Types of Musculoskeletal disorders of the elbow

“Tennis player’s elbow” or external epicondylalgia (formerly called epicondylitis)
It affects 1% to 3% of the population. However, tennis is not the main cause of an external epicondylalgia. Moreover, the players are now rarely reached since the majority of them perform their backhand with both hands and use rackets much lighter than before.

The pain is mostly localized in the outer part of the forearm, in the epicondylic region (see diagram above). The epicondyle , also called external epicondyle, is a small bony protrusion of the outer face of the humerus, located near the elbow.

“Golfer’s Elbow” or Internal Epicondylalgia (formerly called Epitrochleitis)
this condition is 7 to 10 times less common than tennis player’s elbow. It affects golfers, but also people who practice racket sport, baseball throwers and manual workers. The pain is located in the inner part of the forearm, in the region of the epitrochlea (see diagram above). The epitrochlea , also called internal epicondyle, is a small bony prominence of the medial aspect of the humerus.

For more information, see our article entitled Anatomy of the joints: basic concepts .

Causes of Musculoskeletal disorders of the elbow

When the same gestures are often repeated or improperly forced, small injuries appear in the tendons. These micro-traumas cause a decrease in tendon elasticity because the collagen fibers produced to repair the tendons are not as good as the original tendon.

Elbow “wear” or irritation of the nerves adjacent to the elbow may also cause pain and inflammation . Although these lesions do not systematically induce inflammation of the tendons, the surrounding tissues can ignite and damage the elbow joint.

The pain usually persists for a few weeks, sometimes several months. It is rare that it lasts more than 1 year (less than 1% of cases).

Possible complications of Musculoskeletal disorders of the elbow

Unnoticed or unhealthy epicondylalgia leaves lesions that can lead to chronic pain, which is much more difficult to heal.

SYMPTOMS of Musculoskeletal disorders of the elbow

People at risk for Musculoskeletal disorders of the elbow

At work or when doing maintenance or renovations

In the exercise of a sport

Prevention of musculoskeletal disorders of the elbow

Medical treatment of musculoskeletal disorders of the elbow 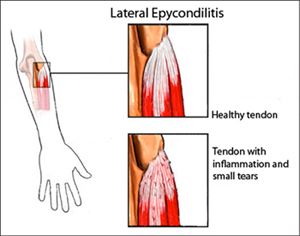 The duration of the acute phase of the injury varies. It is about 7 to 10 days . During the first 48 to 72 hours, it is important to immediately relieve the pain and inflammation that may be present. The injury is fragile and the tissues are more easily irritable than usual.

Here are a few tips :

Drugs . During this phase, the doctor may suggest taking an analgesic (Tylenol or others) or a nonsteroidal anti-inflammatory drug, such as aspirin or ibuprofen, available over-the-counter (Advil, Motrin or others), naproxen (Naprosyn) or diclofenac (Voltaren) obtained by prescription. Do not take anti-inflammatory drugs more than 2 or 3 days. Analgesics can be taken longer.

Knowing that epicondylalgia is rarely accompanied by inflammation, cortisone injections no longer have a place in treatment.

Physiotherapy treatments should begin as soon as the diagnosis of epicondylalgia is made. Physical therapy can redirect collagen fibers, prevent ankylosis and recover lost mobility. This can be done by means of massage, friction, ultrasound, electric currents, laser, etc.

Once the pain is reduced, the focus is on muscle building while continuing to work on the mobility of the joint. It is especially important to strengthen the extensor muscles (for the elbow of the tennis player) and the flexor muscles (for the elbow of the golfer) of the wrist. For this type of injury, it has been proven that eccentric reinforcement , that is to say, to force while the muscle is growing longer, is the basis of the treatment.

It may be necessary, in more severe cases, to wear an orthosis (splint) designed to reduce the tension on the epicondylar muscles during wrist movements that are causing the problem. The rigid epicondyle bands, which look like bracelets placed under the elbows, are the most used. However, beware of fabric models (with or without a hard washer) or elastic bands sold in pharmacies, which are ineffective. It is better to buy them in orthopedic appliances stores. 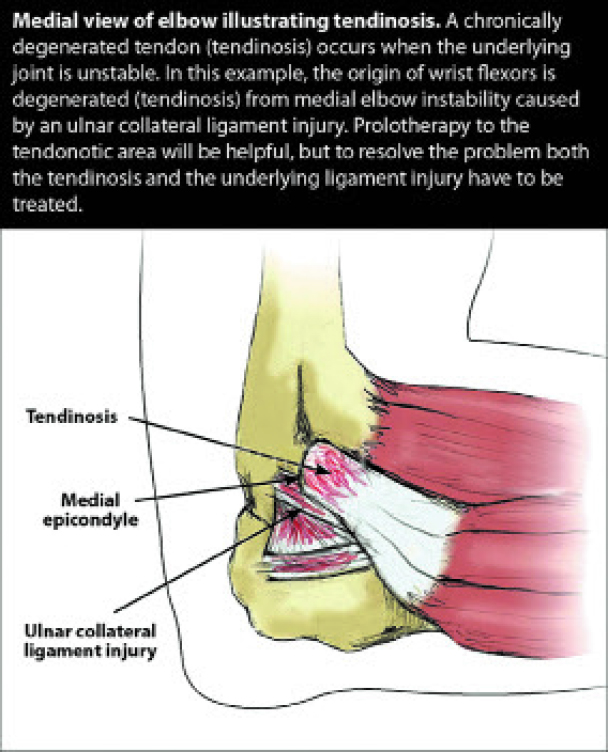 Back to normal activities

The normal activity (the movements that caused the injury) is gradually resumed, when the full range of motion has been covered and the pain is controlled. A follow-up in physiotherapy makes it possible to prevent relapses. It is however essential to continue reinforcement exercises .

Surgery is performed extremely rare. Generally, it is only used when the usual treatments do not lead to satisfactory results after several months. It should be known that the results are often disappointing.