Myasthenia gravis is a chronic disease that causes tiredness and weakened muscles. This muscle weakness worsens after an effort of the muscles and improves with the rest, which is characteristic of this disease. Its gravity comes from the risk of respiratory accidents.

The gravis is a disease characterized by weakness and abnormally rapid fatigue of muscles that are under voluntary control of the person.

It is caused by a communication problem between nerves and muscles.

It cannot be cured, but treatment can help relieve signs and symptoms, such as weakness of the arm or leg muscles, double vision, drooping eyelids, and speech or breathing difficulties.

The disease most often affects the coulometer muscles that control the movement of the eye and eyelids, so that the first symptoms observed are an inefficient occlusion of the eyelids and / or blurred or double vision, so-called diplopia .

The causes of myasthenia

Nerves communicate with muscles by releasing chemicals (called neurotransmitters) that attach to receptor sites on muscle cells at the junction between the nerve and the muscle (called the neuromuscular junction).

In myasthenia, the immune system produces antibodies (proteins that are supposed to fight against foreign invaders such as bacteria, viruses or fungi) that mistakenly destroy the receptor sites that are fixed by one of the neurotransmitters called acetylcholine. Since there are fewer receptor sites available, the muscles receive fewer nerve signals, resulting in decreased muscle contraction.

Some people may have myasthenia that is not caused by antibodies that block acetylcholine or tyrosine kinase. Other antibodies may play a role in the development of this condition.

Myasthenia is more common in women (two for one). Although it affects people of all ages, it is more common among women aged 20 to 40 and men between 50 and 70 years.

It is necessary to see a doctor if the person has difficulties to:

The doctor will examine the symptoms and medical history and will perform a physical examination. The doctor can perform several tests by testing the following:

The key sign that highlights the possibility of myasthenia gravis is muscle weakness that improves with rest. Tests to confirm the diagnosis may include:

Test with the Tensilon

Injection of Tensilon (edrophonium) may result in a sudden, albeit temporary, improvement in muscle strength. This is an indication of the presence of myasthenia gravis.

Edrophonium blocks an enzyme that degrades acetylcholine, the neurotransmitter that transmits signals from nerve endings to muscle receptors. 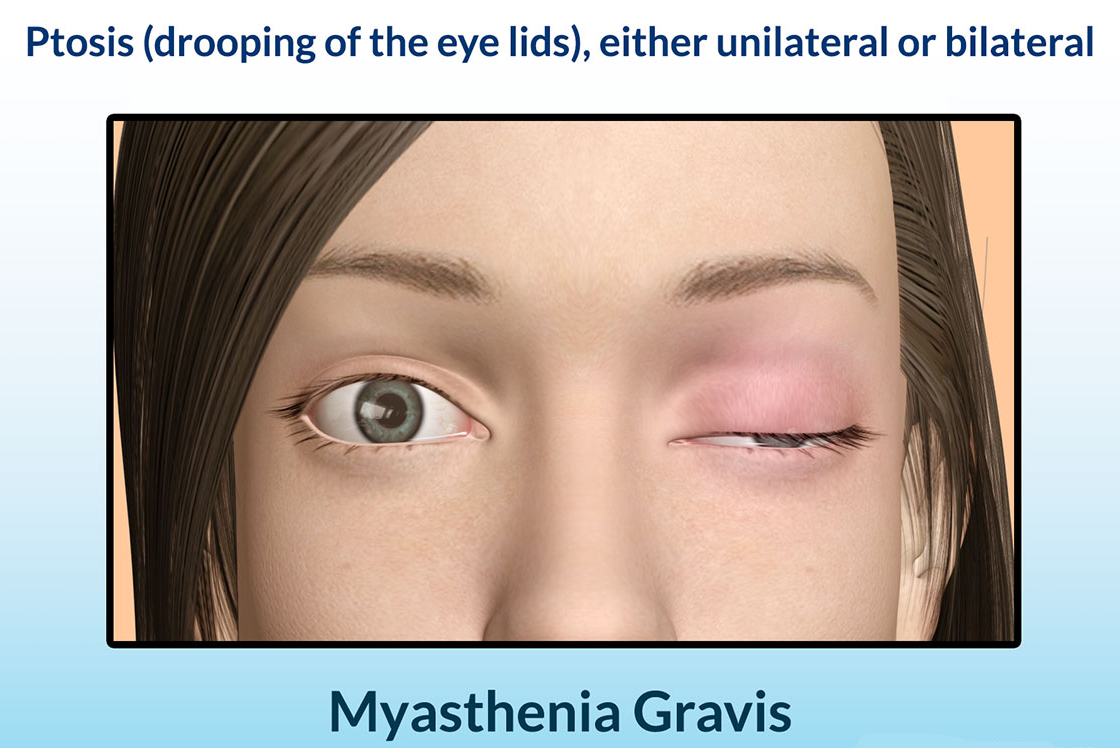 If the patient has a drooping eyelid, the doctor can perform a test with a block of ice it lays on the eyelid. After two minutes, the doctor removes the bag and analyzes the drooping eyelid to see if there are any signs of improvement.

A blood test may reveal the presence of abnormal antibodies that disrupt the receptor sites on the muscles.

The doctor attaches electrodes to the skin on the muscles to be tested and then sends small electrical pulses through the electrodes to measure the nerve’s ability to send a signal to the muscle. In the case of a mysathenia, this ability decreases with fatigue.

The doctor may request CT or MRI to check for a tumor or other abnormality in the thymus.

The doctor can perform tests to assess whether myasthenia gravis affects the patient’s breathing.

Myasthenic crisis is a fatal disease that occurs when the muscles that control breathing become too weak to function. It can occur in case of anxiety attack and agitation. Emergency treatment is necessary to provide mechanical assistance to breathing. Some medications and / or blood filtering help people to breathe without assistance.

About 15% of people with myasthenia gravis have a thymus tumor (lymphoepithelioma). Most of these tumors, called thymomas, are not cancerous (benign). This is why the thymus is usually removed (thymectomy) to prevent the possible spread of cancer.

People with myasthenia gravis are more likely to have the following conditions: 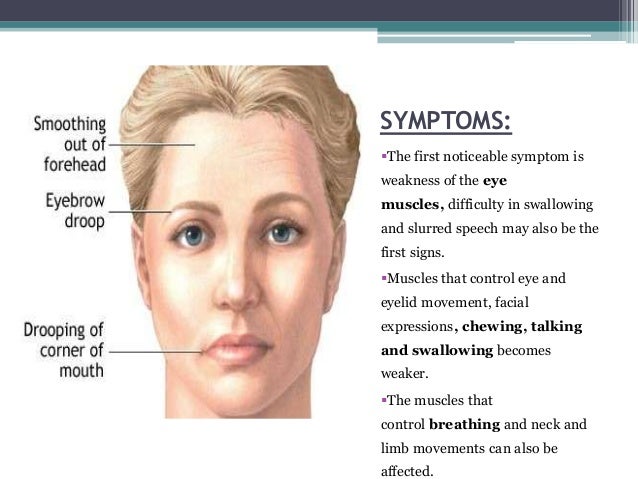 How to live with myasthenia gravis?

There are approaches that can help the patient cope with the symptoms of myasthenia gravis:

Muscle weakness caused by myasthenia gravis increases when the affected muscle is repeatedly stressed. Muscle weakness fluctuates because symptoms usually improve with rest. However, symptoms of myasthenia tend to progress over time, usually worsening a few years after the onset of the disease.

There are usually times when the patient notices more symptoms (exacerbation phase), interspersed with periods when symptoms diminish or disappear (remission phase).

The muscles affected by myasthenia

Although myasthenia can affect any voluntarily controlled muscle, some muscle groups are more frequently affected than others.

The muscles of the eyes

In more than half of the cases, the first signs and symptoms of myasthenia gravis are eye problems such as:

The muscles of the face and throat

In about 15% of cases, the first symptoms of myasthenia gravis involve muscles of the face and throat, which can cause:

Myasthenia can cause weakness in the muscles of the neck, arms, legs, but also in other parts of the body such as the eyes, face or throat.

There are factors that can aggravate myasthenia gravis such as:

Some children are born with a rare, hereditary form of myasthenia, known as congenital myasthenic syndrome.

There is no preventive treatment of the disease.

Doctors use a variety of treatments, alone or in combination, to relieve the symptoms of myasthenia gravis.

About 15% of people with myasthenia gravis have a thymus tumor. The doctors will then perform a surgical procedure to eliminate the thymus (thymectomy). If there is no tumor, surgery can still decrease the symptoms of myasthenia gravis. The improvement is most often manifested several months after the intervention.

The choice of treatments depends on several factors such as the age of the patient, the severity of his condition, the type of affected muscles and other co-occurring diseases.

A small study suggests that intramuscular injection of huperzine A maintains muscle strength in myasthenia gravis patients after 10 days of treatment. This effect is similar to that seen with neostigmine (an acetylcholinesterase inhibitor). Further larger studies are needed to confirm these results.