Myoclonus is characterized by the occurrence of brief muscle twitches. These are manifested by involuntary and sudden movements. There are different forms including sleep myoclonus, or secondary myoclonus that occur especially in cases of epilepsy.

Definition: What is myoclonus?

Myoclonus refers to brief muscle twitches that cause involuntary, sudden, abrupt movements. They can occur spontaneously or occur in response to a stimulus such as a noise or flash of light. Shaking can occur in a single muscle or in a muscle group.

The usual example of myoclonus is hiccups , or phrenoglottic myoclonus. It is the result of a succession of involuntary muscle contractions.

Explanations: what are the causes of myoclonus?

Myoclonus can be caused by sudden muscle contraction or abrupt cessation of muscle activity. These phenomena can have several explanations. Depending on the case, there are three types of myoclonus:

Myoclonus may be related to the functioning of the body. For example, we can mention:

Other physiological causes have also been identified. These include anxiety , physical exercise or diet.

Secondary myoclonus may be due to various disorders such as: 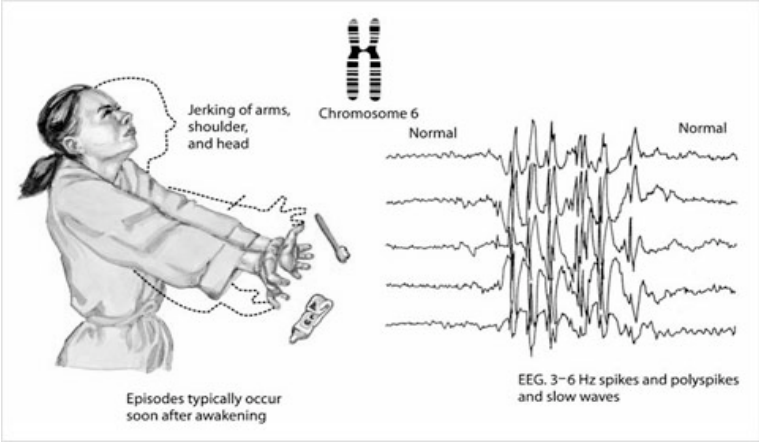 Myoclonus can sometimes be the result of medical treatment. It can for example be a follow-up to:

Evolution: what are the consequences of myoclonus?

The clinical manifestations of myoclonus vary according to the case. They can in particular vary in amplitude and frequency. In the most severe cases, muscle twitches can be generalized with the onset of seizures.

Treatment: what to do in case of myoclonus?

When myoclonus is generalized, persists or repeats, emergency medical consultation is recommended. Medical management can identify and treat the cause of myoclonus.

To define the origin of the myoclonus, it is generally necessary to perform electrophysiological recording of abnormal movements.

To relieve muscle twitches, symptomatic treatment can sometimes be put in place. This can be based on the use of different drugs: