The narcolepsy, sometimes called disease Gélineau, means a chronic sleep disorder characterized by sudden and irresistible bouts of sleep. The narcoleptic feels, suddenly at any time of the day, a compelling need to sleep, which leads him to fall asleep anywhere (workplace, transportation, etc.). This disorder can occur at any age but the first episode sometimes appears during adolescence. This condition affects about 1 in 2,800 people and affects both men and women. It causes no complications but can alter the social life and well-being of the patient. Although there is no curative treatment, somemedications help prevent symptoms.

Narcolepsy is defined as a sleep disorder that causes uncontrollable sleep apneas lasting anywhere from a few minutes to an hour. The subject is likely to instantly enter a deep sleep wherever he is. While it is true that this disorder is not serious in itself, it can be dangerous depending on the situation, for example if the person is driving. 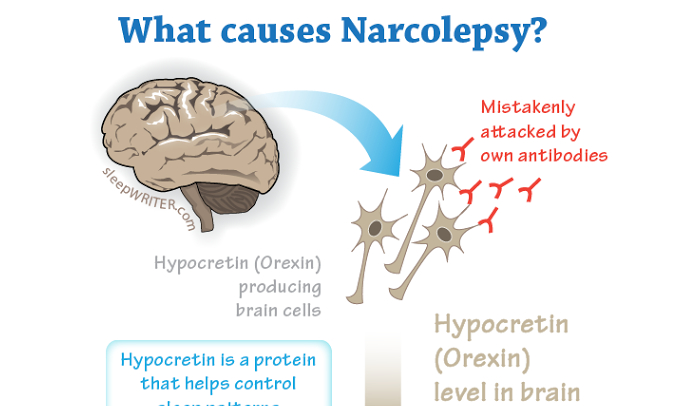 How to diagnose it?

The patient’s testimony directs the physician to his diagnosis, which can often detect whether or not it is narcolepsy.

The doctor asks his patient to fill out a sleep diary for a few weeks, where he records the moments of sleep and sleep, night awakenings and periods of sleep crises during the day.

Faced with a possible case of narcolepsy, a person may be subjected to a polysomnographic recording and iterative sleep latency tests, performed in a center specializing in sleep disorders. It is observed during a day during which tests are performed during sleep seizures: electroencephalogram, study of eye movement and muscle tone. The direct passage to paradoxical sleep (5th stage of the sleep cycle) as soon as you fall asleep reveals narcolepsy.

A very low level of hypocretin (obtained by cerebrospinal fluid sampling) is another suggestive sign of the disease.

What are the symptoms of narcolepsy?

Narcolepsy has various symptoms, mainly related to sleep attacks, which occur at any time of the day. We find:

People with narcolepsy do not necessarily have all the symptoms described. The risk of seizure is higher (sleep or catalepsy) when the person feels an intense emotion.

What are the risk factors for narcolepsy?

The causes of narcolepsy are not well known. The disease appears preferentially in people carrying certain genes, even if they are not enough to trigger the disease.
A neurotransmitter (the hypocretin) located in the brain, could be a cause of narcolepsy. However, other factors could be involved, such as certain autoimmune processes, viral diseases, traumatic brain injury or certain toxic substances.

How to prevent narcolepsy?

Some preventive naps of about 20 minutes during the day, a sufficient amount of sleep and a regular rhythm help to prevent seizures.
People suffering from this disease must carry a card stipulating their pathology on them, because in the event of a fall linked to an abrupt fall asleep or a crisis of catalepsy, this makes it possible to avoid unnecessary hospitalizations.

What are the treatments for narcolepsy?

There is no real cure for this disease.
Part of the treatment is therefore behavioral, so as to learn to live with this disease, at best without putting oneself in danger. It is a question of learning the behaviors and the hygiene of life to follow according to the moments.

However, there is medication available to reduce the sudden drowsiness of the day in 70% of cases. The drug used for drowsiness and sleep apnea is modafinil .

Some low-dose antidepressants, clomipramine, fluoxetine and viloxacin, are used against catalepsy. Other drugs are sometimes used more exceptionally.