Neuroleptic malignant syndrome is a pathology characterized by a neurological condition. This syndrome is usually caused by side effects when taking medications such as neuroleptics or anti-psychotics.

This syndrome is related to the idiosyncratic state, ie the way of being of each individual, his reactions and his behavior with his environment.

This pathology leads to high fever, sweating, instability in terms of blood pressure, muscle rigidity and malfunctions in automatisms.

In the majority of cases, the first symptoms appear after two weeks of treatment with neuroleptics or anti-psychotics. Nevertheless, the symptoms associated with the disease may appear throughout the period of taking medication.
Cases of neuroleptic malignant syndrome have also been reported following discontinuous treatment with Parkinson’s drugs. 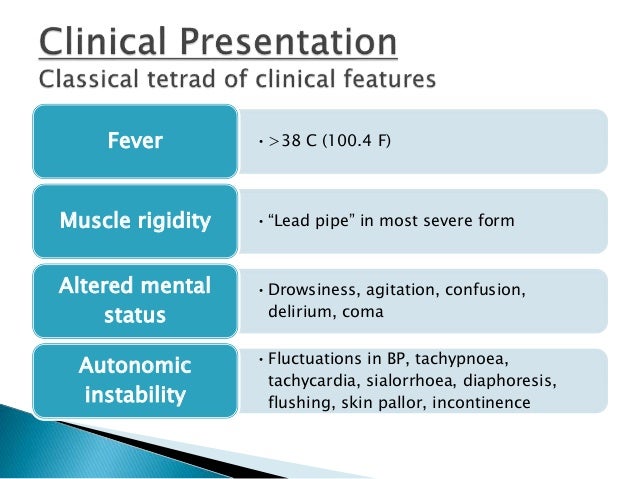 The neuroleptic malignant syndrome affects about 1 to 2 cases out of 10,000 patients on neuroleptic or antipsychotic treatment. This prevalence affects both men and women with a slight predominance for men of all ages.

The neuroleptic malignant syndrome is associated with various clinical features such as:

A characteristic of the neuroleptic malignant syndrome is the presence of an important muscular rigidity associated with a lack of reflexes: “lead-pipe” rigidity.

Vital signs characteristics are also observable in this type of pathology:

Changes in biological parameters are also visible in this type of disease:

The development of neuroleptic malignant syndrome originates from side effects associated with taking drugs of the types: neuroleptic and anti-psychotic.

The most important risk factor in the development of neuroleptic malignant syndrome is the use of neuroleptics or anti-psychotics.

In addition, physical exhaustion, agitation, dehydration is additional factors in the risk of developing the disease.

Patients taking neuroleptics or anti-psychotics in high doses, in the parenteral form (intravenous, intramuscular, etc.) or with a rapid increase in dosage, are more likely to develop the pathology. The treatment of this syndrome is usually intensive.
The drug in question (neuroleptic or antipsychotic) is interrupted and the fever is treated intensively.
Medications that allow muscle relaxation can be prescribed. In addition, dopamine-based treatments (dopaminergic drugs) are often useful in the treatment of this pathology.

To date, no specific treatment for this syndrome has been the subject of concrete evidence.
Nevertheless, the benefits of treatment with benzodiazepines, dopaminergic agents (bromocriptine, amantadine), dantrolenes (muscle relaxants) and electroconvulsive therapy have been reported.

Careful monitoring is required in cases of cardiorespiratory failure, renal failure, aspiration pneumonia and coagulopathy.
In addition, respiratory assistance and dialysis may be prescribed.

In the absence of treatment and after stopping the psychotropic disorder, the neuroleptic malignant syndrome usually cures between 1 and 2 weeks.
Moreover, the syndrome is potentially fatal.
The causes of death in the context of this disease result from cardiopulmonary arrest, aspiration pneumonia (pulmonary involvement characterized by reflux of fluid into the bronchi from the stomach), pulmonary embolism, myoglobinuric renal failure (renal failure with blood in the urine), or disseminated intravascular coagulation.
The mortality rate associated with this pathology is between 20 and 30%.