Ovarian failure is an inevitable physiological process in women. This is called menopause, which occurs on average at age 51. This menopause is called early when it occurs before age 40. There is also talk of early ovarian failure (IOP).

Early ovarian failure is clinically defined as amenorrhea (absence of menses) more than four months before the age of 40, associated with high FSH levels in at least two samples taken within a few weeks of each other.

Early ovarian failure leads to infertility because without ovulation, there is no fertilization possible. However, some women with PDI may intermittently have eostrogen production and ovulate, and in 5 to 10% of cases, have a baby.

The causes of Ovarian failure

As a reminder, in the girl, the stock of ovarian follicles is constituted in utero. Thus at birth, each ovary contains a “pool” of 1 to 2 million ovarian follicles. From puberty to menopause, at each cycle, a small portion of this stock matures during the follicular phase. A dominant follicle matures and ovulates, while other follicles die. At the same time, there is a normal phenomenon of apoptosis, or “programmed death,” of a certain part of the follicle pool. This phenomenon accelerates after 37 years and menopause occurs when the number of follicles is less than 1000.

During this physiological process, three different mechanisms may cause early ovarian failure:

Different causes can be at the origin of these mechanisms:

But in more than 80% of cases, the IOP remains idiopathic: its cause remains unknown . 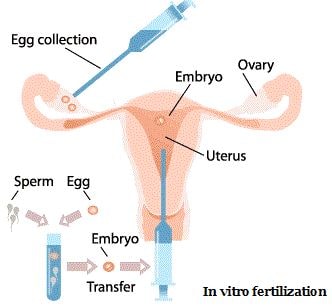 The prevalence of the IOP is estimated at:

The main complications of ovarian failure are twofold:

It is also known that young women with PDI have an increased risk of developing autoimmune adrenal insufficiency.

Depending on its cause (and especially the fact that it is present or not at birth), ovarian failure can manifest itself by various symptoms:

Difficulties to conceive can also be a motive for consaltation.

The diagnosis of IOP is made in the presence of these two elements:

Ultrasound is not a determining factor in the diagnosis of IOP. Ovarian biopsy is useless.

Once the diagnosis is made, we will try to find the cause of the IOP with different elements: interrogation on the personal and family medical history, clinical examination, karyotype, etc.

The processing of the IOP is based on two axes:

With the exception of sampling and egg freezing prior to anti-cancer treatment in young women, no prevention exists against IOP. It is also impossible to predict the occurrence of an IOP because there is no predictive marker of its occurrence. However, it is important to consult when previously irregular cycles become irregular, in order to detect early ovarian failure as early as possible.