Paget’s disease is a benign bone disease characterized by an acceleration of bone remodeling . It is the second most common bone disease after osteoporosis .

In the normal state, the bones are the seat of a remodeling (also called bone remodeling or “bone turnover”) permanent and perfectly regulated allowing the bone to renew itself and to keep its structure and its solidity. This physiological reorganization alternates bone resorption phase (that is to say bone destruction) and bone reconstruction phase (also called osteoformation).

Paget’s disease is rare before the age of 40 and most often affects men over 50 years of age.

There is a family predisposition to the development of Paget’s disease. However, its mode of genetic transmission is not clearly understood.

Its evolution is slow and may be enamelled with bone, joint or neurological complications . 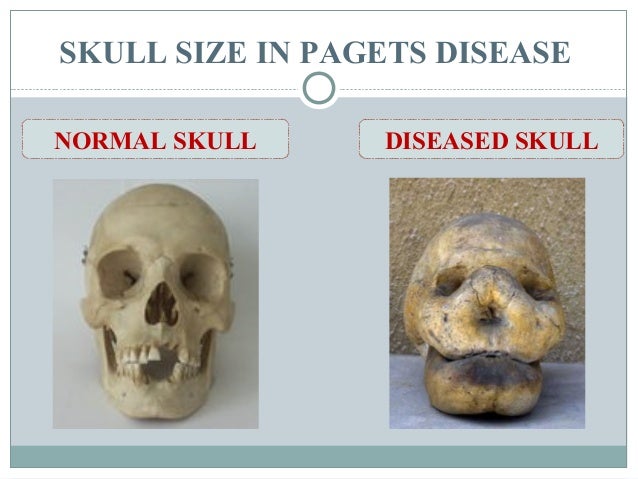 Paget’s disease can affect one or more bones. It only affects the bones initially affected (no extension possible on other bones).

She is most often asymptomatic, then discovered by chance during radiographic examinations for another reason.

Several clinical signs can reveal the disease and motivate the prescription of radiological examinations:

– Bony deformities  : they are inconstant and late (sign of the hat by hypertrophy [increase of volume] of the skull, tibia saber blade, flattening of the thorax, deformation of the spine [kyphosis])

Note that there is no alteration of the general condition.

The bones most affected by the disease are the pelvic bones, the dorsal and lumbar vertebrae, the sacrum, the femur, the skull and the tibia.

The X-rays used to highlight characteristic signs of the disease:

Structural abnormalities: thickening of cortices (walls of the bone)

The bone scan helps highlight intense uptake in the affected bones. The main interest of this examination is to specify the bones affected by the disease. On the other hand, it is useless to repeat it during the follow-up and the treatment of the patient.

The increase in the blood of alkaline phosphates is proportional to the extent and activity of the disease. It reflects the intense activity of bone formation. This dosage may be normal if the disease is localized to a single bone.

Dosages of crosslaps (also called CTx or NTx) and pyridinolines in the blood or urine are increased and testify to bone destruction activity.

Unlike bone scans, these analyzes are useful for monitoring the disease under treatment. As such, they are performed every 3 to 6 months.

-the serum calcium (calcium levels in the blood) is usually normal. It can be increased in case of prolonged immobilization or associated hyperparathyroidism.

The sedimentation rate is also normal.

The complications of the disease are variable from one patient to another and are of order:

– Articular  : mainly involving the hip and knee, they are linked to deformities of the bone ends caused by the disease and are responsible for pain, deformity and functional impotence

– Nerve  : related to the compression of nerves by the deformation of the bones. Thus, it is possible to observe deafness most often bilateral (affecting both ears), paraplegia (can be treated)

Quite exceptionally, the occurrence of a malignant tumor can occur on the bone affected by the disease (humerus and femur). An increase in pain and radiographic abnormalities may suggest this diagnosis which can only be confirmed with certainty by the practice of a biopsy.

Paget’s disease should not be confused with: Treatment is reserved for painful or complicated forms of the disease and is based on:

the bisphosphonates (alendronate, pamidronate, tiludronate): they are opposed to bone destruction. They can act on the symptoms of the disease and slow down its evolution