Phenylketonuria is a disease characterized by the non-assimilation (or non-metabolism) of phenylalanine.

Phenylalanine is an essential amino acid that plays a fundamental role in the nervous system by stimulating the thyroid gland. It is also an intellectual stimulant.This amino acid is not synthesized by the body and must be brought through the diet. Indeed, phenylalanine is one of the constituents of all foods rich in animal and vegetable proteins: meat, fish, egg, soy, milk, cheese, etc.

It is a rare genetic and hereditary disease that affects both girls and boys, without particular preponderance.
In the case where the disease is not detected early for rapid management, an accumulation of this substance can be done in the body and especially in the nervous system. An excess of phenylalanine in the developing brain is toxic.
The excess of phenylalanine present in the body is evacuated by the renal system and thus found in the urine of the patient, in the form of phenylketones.

In France, a test for phenylalanine is systematic at birth: Guthrie test.

The prevalence (number of people with the disease in a population at a given time), depends on the country concerned and can vary between 1/25 000 and 1/2 600.
In France, the prevalence of phenylketonuria is 1 / 17,000.

This disease is treated by a diet low in protein to reduce the level of phenylalanine in the body of the patient and limit brain damage.
Early treatment of the disease usually prevents the development of symptoms.
In addition, late treatment leading to an accumulation of this molecule in the brain has particular consequences:
– learning difficulties;
– behavioral problems;
– epileptic disorders;
– eczema.
Three forms of the disease have been identified after blood tests at birth:
typical phenylketonuria: with a phenylalaninemia (phenylalanine level in the blood) greater than 20 mg / dl (or1 200 μmol / l);
atypical phenylketonuria: with a level between 10 and 20 mg / dl (or 600-1200 μmol / l);
– permanent moderate hyperphenylalaninemia (HMP) where phenylalaninemia is less than 10 mg / dl (or 600 μmol / l). This form of the disease is, on the other hand, not serious and requires only a simple surveillance in order to avoid any aggravation.

In case the neonatal diagnosis is not made, the symptoms of phenylketonuria appear quickly after birth and can be more or less severe depending on the form of the disease.
These symptoms are characterized by:
– a delay in the child’s mental development;
– a delay in growth;
– microcephaly (abnormally small size of the skull);
– convulsions and tremors;
– eczema;
– vomitings ;
– behavioral problems (hyperactivity);
– motor disorders.
In the case of hyperphenylalaninemia, mutations in the gene coding for a cofactor for conversion of phenylalanine to tyrosine (co-factor BHA) are possible. These disturbances in the production of tyrosine lead to:
– a clear skin;
– light hair. 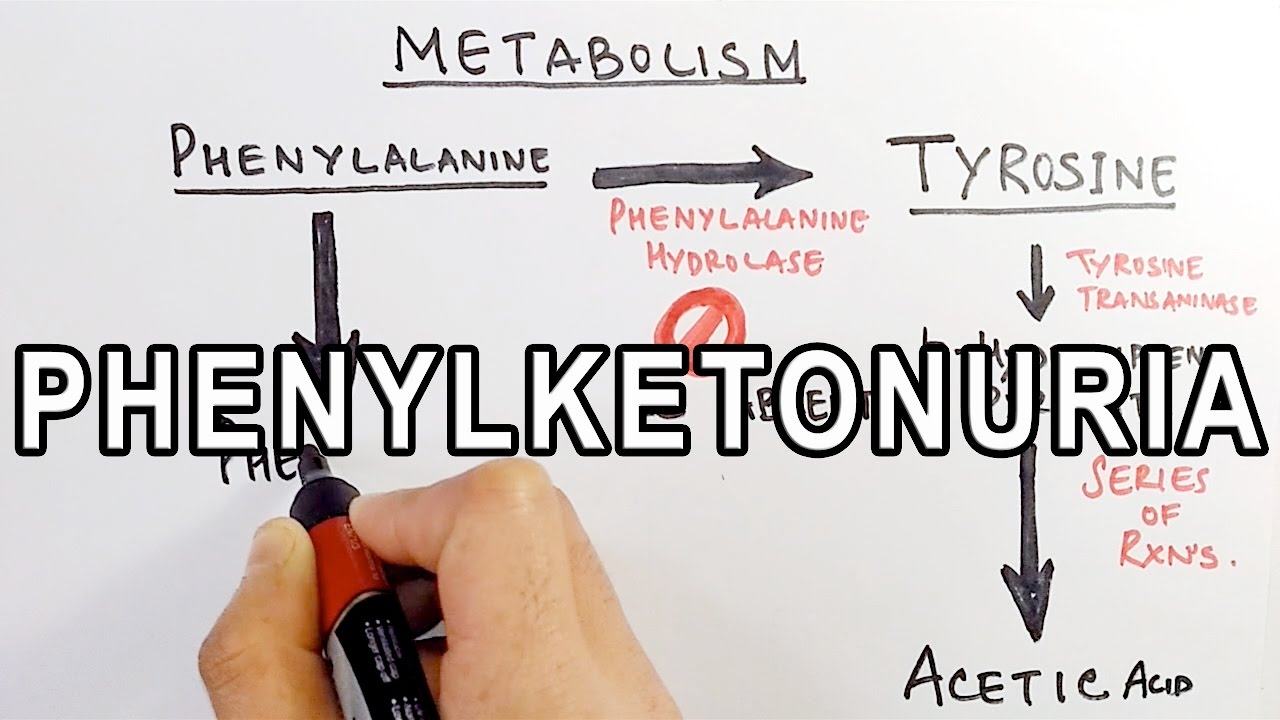 Phenylalanine is a genetic inherited disease. It results in autosomal recessive inheritance. This mode of transmission concerns an autosome (non-sexual chromosome) and the recessiveness results in the need for the subject to have two copies of the mutated allele to develop the sick phenotype.

The origin of the disease is the PAH gene mutation (12q22-q24.2). This gene codes for an enzyme allowing hydrolysis (destruction of a substance by water): phenylalanine hydroxylase.

The mutated gene therefore results in a reduction in the activity of phenylalanine hydroxylase and therefore the phenylalanine from the diet is not effectively treated by the body. The rate of this amino acid in the blood of the affected subject is therefore increased. Following the increase of this amount of phenylalanine in the body, its storage will take place in different organs and / or tissues, particularly in the brain.

Other mutations have been highlighted in the relationship with the disease. These are modifications at the level of the genes coding for BHA (co-factor of the conversion of phenylalanine to tyrosine) and concern particularly the form of hyperphenylalaninemia.

Risk factors related to the disease are genetic. Indeed, the transmission of this disease is done by an autosomal recessive transfer. That is, the presence of both mutated alleles for the gene must be present in the individual to develop the disease.

Prevention and treatment of phenylketonuria

The diagnosis of phenylketonuria is mainly made through the screening program at birth: routine neonatal screening. This is Guthrie’s test.
This test is considered positive if the phenylalanine level in the blood is greater than 3 mg / dl (or 180 μmol / l). In the context of an excessive phenylalaninemia, a second blood test is performed in a specialized center to confirm or not the presence of phenylketonuria. If the level of phenylalanine is still greater than 3 mg / dl in the second dose and no other possible disease has been identified, the diagnosis is made.

The diagnosis of this disease is to be distinguished from that of BH4 deficiency. Indeed, the latter is particularly characteristic of hyperphenylalaninemia and requires only a simple monitoring. While the detection of the presence of phenylketonuria in the subject requires special treatment and a diet low in protein.

The primary treatment of phenylketonuria is therefore a diet low in phenylalanine, which is a reduction in dietary protein intake. This low-protein diet should be introduced as soon as neonatal screening is done. It must be followed throughout one’s life and may be more or less strict depending on the subject and the form of the disease.

In addition to this diet depleted in phenylalanine, sapropterin dihydrochloride can be prescribed to the patient so that his diet is less strict or his diet remains normal.
In addition, dietary supplements rich in amino acids (excluding phenylalanine), vitamins and minerals may be recommended in order to restore the possible imbalance of these intakes as a result of this diet.

Consumption of aspartame (artificial sweetener used in many products such as industrial drinks, food preparations, etc.) should be avoided absolutely for people with phenylketonuria. Indeed, once absorbed, aspartame is transformed in the body into phenylalanine. In this sense, increases the risk of accumulation of this molecule in the body and may be toxic to the subject. Aspartame is also present in many drugs, special attention of patients is requested for the taking of certain drugs.

In terms of prevention, the transmission of the disease being hereditary, families affected by the disease can get help and advice in genetics.
The prognosis varies depending on the patient and the form of the disease.