The pneumothorax means a pathology affecting the pleural space , virtual space between the lung and the rib cage. It is called pneumothorax when this cavity fills with air or gas, causing a detachment and a retraction of one or both lungs. Pneumothorax can be spontaneous (its origin is then unknown), traumatic or secondary to pulmonary disease. It is essentially characterized by a sudden chest pain sometimes associated withdifficulty breathing most often, pneumothorax is unilateral. The treatment varies depending on the type of pneumothorax: some develop spontaneously to recovery after a rest, while others require surgery.

The inner part of the rib cage and the outer part of the lungs are each covered with a thin membrane, the pleura , sliding on one another during respiratory movements. The pleural cavity, a virtual space present between these two pleura, sometimes fills with air or gas. This phenomenon is called pneumothorax. There are several types of pneumothorax according to the cause responsible:

A pneumothorax is manifested by

Depending on the importance of pneumothorax, complications can occur: tachycardia (rapid heart rate) and cyanosis (blue staining of the skin and mucous membranes).

Clinical observation may allow the physician to notice an asymmetry in the lungs at the sound of percussion on the affected side ( tympanism, a hollow sound ). Similarly, the auscultation, the doctor may no longer hear the breath of breathing, and when he asks to say “33”, the sound does not vibrate the chest on the affected side. These signs will guide his diagnosis and are especially present if the pneumothorax is important. It will be confirmed by an X-ray of the lungs . The images obtained will show a detachment of the lungs or lungs . 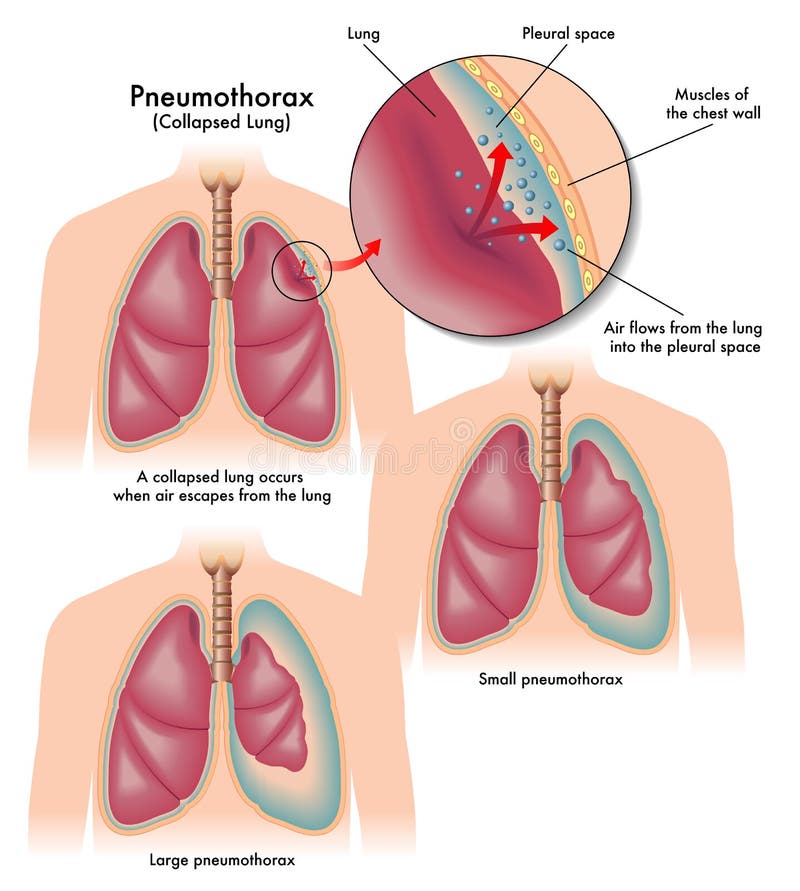 The choice of treatment depends on the type of pneumothorax, the severity of the symptoms and the cause responsible. In case of spontaneous pneumothorax, a period of rest is recommended, sometimes accompanied by a drug treatment based on analgesics . The healing is observed in a few days until 2 or 3 weeks.

When pneumothorax is more important, the doctor can evacuate the air, with a needle, a specific catheter or by placing a drain in the pleural space. This is done under local anesthesia, and healing usually occurs in a few days.