Polio: what is it?

Poliomyelitis, more commonly known as polio, is a viral disease that affects children, especially children under 5 years of age . The virus responsible for this highly contagious disease attacks the central nervous system and can cause in a few hours, in about one in every 200 cases, permanent paralysis . Polio has been a major cause of disability in the world. This virus, which causes death in 5 to 10% of cases of paralysis, enters the body through the mouth and then develops in the intestines . He can then reach the spinal cord or the brainstemand cause irreparable damage. However, in many cases, the disease remains asymptomatic or produces only mild symptoms. The person may, however, transmit the disease to those around him because polio is spread from person to person.

There are three strains of the poliovirus , a virus that belongs to the same family as those responsible for influenza or hepatitis A , and that cannot survive outside of the human body. Type 2 poliovirus was eradicated in 1999. The most common type 1 and type 3 viruses continue to circulate endemic (= in some parts of the world). The virus spreads in excrement and can contaminate water and food. The incubation time is between 9 and 12 days.

In developed countries, polio has disappeared. But it still kills or paralyzes in some countries. At present, a global vaccination campaign is being undertaken, and now only Afghanistan, Nigeria and Pakistan are endemic countries (compared to more than 125 countries in 1988).

The vaccine is the only way, although very effective, the fight against polio, also sometimes called Heine-Medin disease or infantile paralysis.

People with polio can develop post-polio syndromes (PPS) years later . Nearly half of those healed would be concerned. No treatment can cure or prevent fatigue, weakness or muscle and joint pains, which are characteristic of PPS. The causes of this syndrome remain unknown for the moment. Nevertheless, people who have it are not contagious.

Thanks to vaccination campaigns around the world, polio cases have fallen sharply. Their number rose from 350 000 cases in 1988 to 1625 cases in 2008 and 650 in 2011. At the end of the 1980s, a resolution aimed at eradicating poliomyelitis worldwide was adopted. As such, the Global Polio Eradication Initiative ( GPEI ) was created under the leadership of national governments, the World Health Organization (WHO), Rotary International, the Centers for Disease Control and Prevention. (CDC), United States and UNICEF. Private funds, such as the Bill & Melinda Gates Foundation, have also supported this initiative to immunize all children against polio. 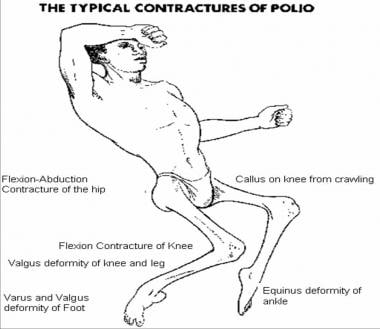 95% of polio cases reveal no complication s . However, if the virus reaches the central nervous system, paralysis of the muscles , with distorted hips, ankles, or feet, may appear and cause death.

Paralyzes caused by poliomyelitis can be temporary or permanent .

Other complications may appear thirty years after the infection, even if the person has been cured. This is post-polio syndrome .

The symptoms of poliomyelitis (Polio)

More than 9 in 10 people infected with poliovirus will have no symptoms, or very few.
Others may suffer from polio without paralysis , the symptoms of which are:

Although this is more rare, people with AIDS suffer from paralysis . They have the same symptoms as polio without paralysis, but they develop in less than a week the following symptoms:

This paralysis can appear abruptly and become permanent in 1 case out of 200. It also causes the death of between 5 and 10% of paralyzed people.

The symptoms of post-polio syndrome , which would affect a little less than half of people who have suffered from polio with paralysis but have survived, are:

People at risk for Poliomyelitis (Polio)

Factors that increase the risk of developing severe symptoms in case of poliovirus infection are not known.

Regarding the post-polio syndrome, certain risk factors could be determined. This is for example:

Prevention mainly involves vaccination. In the West and in developed countries, a trivalent vaccine consisting of the three inactivated virus strains administered by injection is used. It is given to infants at 2 months, 4 months and between 6 and 18 months. A reminder is given between 4 and 6 years old, just before entering school. This vaccine is very effective. It protects 93% after 2 doses, and 100% after 3 doses. The child is then protected against poliomyelitis throughout his life. In some developing countries, a live attenuated virus vaccine, administered orally, may also be used.

No treatment cures polio, hence the importance and importance of vaccination. Some symptoms may be relieved by medication (such as antispasmodics to relax muscles).