Prurigo is defined by the presence of red or purplish pimples, sometimes vesicular, fairly firm and creating intense itching.

Classically, acute, subacute and chronic prurigo are distinguished by their sudden onset and duration.

The elementary lesion is a red swelling of the skin a few millimeters, often vesicular in the center and oozing, itching a lot. The pimples can even become bullous. Then, by means of scratching, the lesions become crustose and become infected, taking on the appearance of melliceric crusts (“like crystallized honey”) or even pustular. They are therefore often associated with scratching streaks, crusts and cutaneous excoriations at the top. 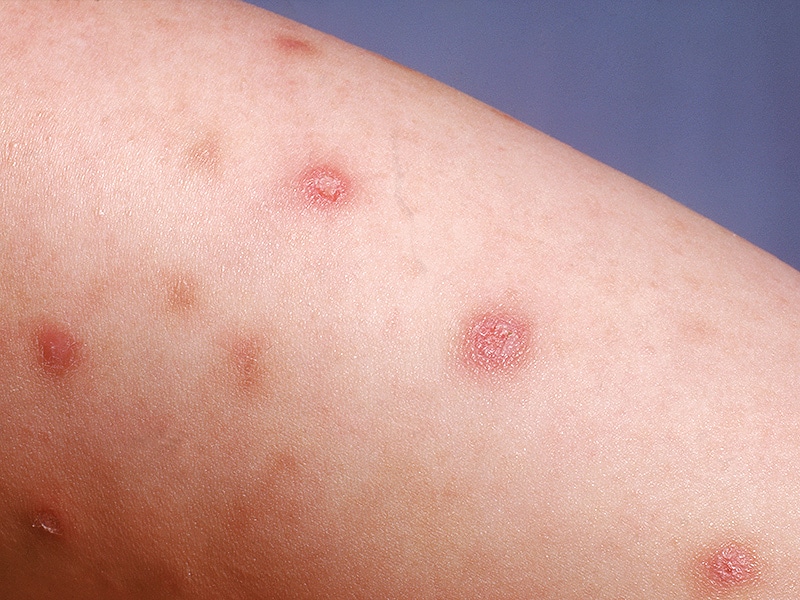 This is the most common form, occurring mostly in the 2- to 7-year-old child, who is often atopic. It is related to hypersensitivity to insect bites and arthropods from the environment (house dust mites such as Dermatophagoides pteronyssinus , mites or even fleas from cats and dogs, chiggers in summer). The lesions sit on the legs and the points of friction.

When there are pets, they must be shown to the veterinarian.

Other acute forms may be due to medicated skin allergies, forms of lymphoma, HIV infection …

The lesions are swollen and vesicular, small and very quickly excoriated, so that we see mostly crusts and sores, predominating in areas easily accessible to scratching the upper back, face, scalp, neck, lower back and buttocks, most often in women in their fifties. A particular psychological context is often discussed, since patients seem to have a tendency to “manage their stress poorly”, but subacute prurigo is not considered solely as a psychodermatosis.

The treatment is symptomatic again combining antihistamines and dermocorticoides, and sometimes healing dressings to limit including scraping and promote healing.

It is a form similar to the subaqueous form but tending to become chronic for years.

The lesions are therefore nodular and thickened (called lichenified) and / or excoriated, measuring 1 to 3 cm in diameter and are particularly common on the posterior surfaces of the forearms, arms, upper back and legs. . Lesions leave pigmented and depigmented scars.

In case of inefficacy of treatment identical to sub-acute prurigo, the doctor can prescribe molecules such as thalidomide, ciclosporin …