Pulmonary emphysema is a chronic, progressive lung disease caused primarily by active and passive smoking and exposure to air pollution. It is characterized by the irritation of the alveoli, the small air pockets of the lungs, causing breathing difficulties. The damage to the lungs is incurable and life-threatening, as treatments can only slow the progression of the disease. Pulmonary emphysema and chronic bronchitis are now referred to as chronic obstructive pulmonary disease, known as COPD. These diseases claimed the lives of 3 million people worldwide in 2012, or 6% of deaths from all causes. 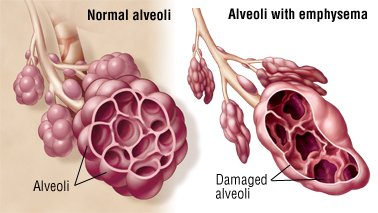 The most common symptoms of pulmonary emphysema, and more generally chronic obstructive pulmonary disease, are shortness of breath during daily activities (dyspnea), a feeling of lack of air and tightness in the chest. Wheezing, chronic cough with sputum of large amounts of mucus, bluish discoloration of the lips and nail bed. Symptoms often only appear when the disease is advanced, delaying the implementation of treatment and thus compromising the diagnosis.

In the lungs, the bronchi branch out into thousands of thinner tubes called bronchioles that end themselves with clusters of tiny pockets of air, the alveoli. When the air reaches these alveoli, oxygen passes into the blood through their walls irrigated into small blood vessels called capillaries. At the same time, carbon dioxide passes from the capillaries to the cells. It’s the gas exchange. Pulmonary emphysema is characterized by the progressive destruction of the pulmonary alveoli which allow this gas exchange during respiration.

Smoking, active and passive, alone accounts for more than 80% of COPD cases. The regular exposure to poor air is the other major exogenous risk factor: air pollution in large urban centers, the presence of toxic products, dust and gas in the air at the site working (smelting, iron and steel, building & public works …) and smoke in unhealthy habitats. Finally, let us note that, since the smoking of women has caught up with that of men, this disease affects today both sexes.

There are also risk factors endogenous to pulmonary emphysema: frequent infections of the lower respiratory tract during childhood, as well as an inherited and rare genetic predisposition, causing an alpha-1-antitrypsin protein deficiency (AAT).

Prevention and treatment of Pulmonary emphysema

An examination of lung function (using spirometry), a chest X-ray, and blood tests are used to assess the damage to the lungs. These are irreversible because there is no curative treatment to date. But the treatment of the symptoms can attenuate them and slow the progression of the disease.

It includes taking bronchodilators (with an inhaler) to open the airways and taking steroid drugs to combat their inflammation. The treatment must also include a set of elements intended to improve the general state of health of the patient and to adopt an irreproachable lifestyle, passing imperatively by the stop of the smoking, but also the adoption of a balanced diet, the maintenance of a weight of form and the limitation of exposure to stress. Pulmonary rehabilitation by physiotherapy and oxygen therapy may also be prescribed. As a last resort, surgery can be performed by bullectomy, lung volume reduction and lung transplantation.