Suffering from Raynaud’s disease or Raynaud’s syndrome, which are two slightly different conditions, is not just about having cold hands or feet. It is a chronic disorder of the circulation of the blood in the extremities, which occurs periodically, in case of exposure to the cold and, more rarely, in case of emotional stress .

The affected parts suddenly become white, cold and sometimes numb or numb, because the blood is no longer circulating. The disease specifically affects the extremities, most often the fingers (the thumb is usually spared) and toes, but also, in some cases, the nose, lips and earlobes or even the nipples. A crisis can last from a few minutes to a few hours.

It is a French doctor, Maurice Raynaud, who first described the manifestations of this disease, in 1862.

We distinguish 2 forms of the disease according to the cause.

According to data compiled in different countries, it is estimated that 3% to 5% of the population suffers from the disease or Raynaud’s syndrome.

In severe cases, which are rare, the permanent decrease of the blood circulation can result in the deformation of the fingers or toes.

If one or more vessels become completely blocked, painful ulcers may appear on the fingertips or even gangrene (tissue death). These two complications, difficult to treat, occur mostly in people with scleroderma.

The symptoms of Raynaud’s disease

A seizure can last from minutes to hours and result in one or more of the following symptoms. 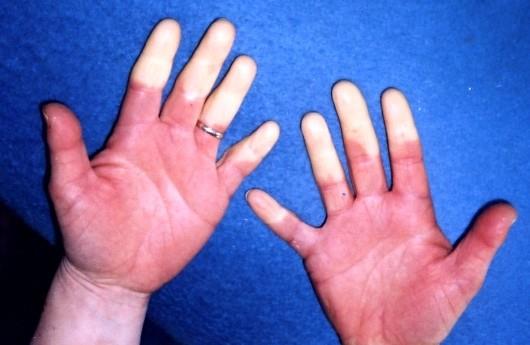 Note. The symptoms are more severe, more intense and last longer in patients with Raynaud’s syndrome. In people with diseases associated with this syndrome, other symptoms specific to these conditions are usually present

People at risk for Raynaud’s disease

Have suffered injuries or frostbite on your feet and hands.

There is still no definitive cure for Raynaud’s disease (primary form). However, it is possible to reduce the frequency of seizures by modifying certain habits, such as quitting or protecting oneself from the cold.

In addition, the symptoms should not be overlooked as they may hide another problem or be the first symptom of an underlying disease such as rheumatoid arthritis or scleroderma . It could then be that we are in the presence of Raynaud’s syndrome (secondary form). In this case, the treatment will seek to cure the underlying disease, which requires a medical consultation. 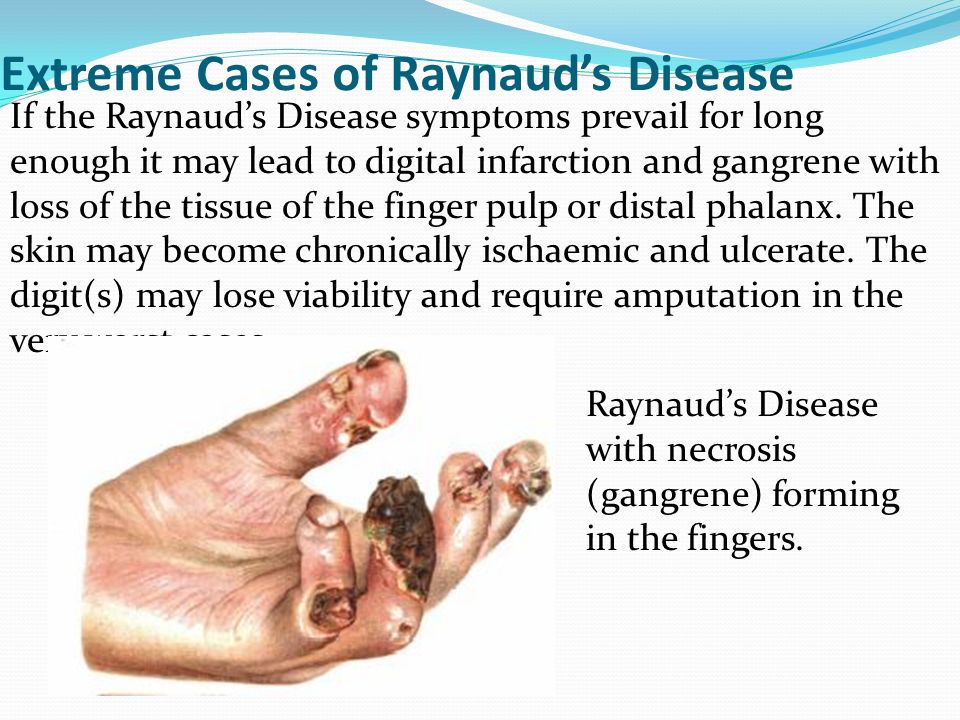 What to do in the event of a crisis?

Getting warm is the first thing to do, to calm the spasm of the blood vessels.

When stress is the cause of the crisis, go to a quiet place and, while warming the affected parties, use an anti-stress technique. Or, get out of the stressful situation, with the help of a third party if necessary, to relax.

Vasodilators. These medications promote the irrigation of the extremities by increasing the opening of the blood vessels.

Adjuvant treatment. When a patient does not respond to treatment, the doctor may prescribe other drugs that increase the effect of vasodilators.

Note. The various treatments recommended are not always effective, especially to treat Raynaud’s syndrome . Some people are more sensitive to adverse effects and have poor tolerance for treatment.

In the most serious cases

When blood circulation is blocked and there is a risk of gangrene , hospitalization may be necessary. This allows for tighter clinical follow-up and, if necessary, intravenous administration of more potent vasodilator medication. In advanced gangrene, amputation may become necessary.