The restless legs syndrome, also called restless leg or nocturnal restlessness, is a neurological disorder that causes an uncontrollable urge to move the legs. This need arises from discomfort in the lower limbs – tingling, tingling, and burning – which varies greatly from person to person. These unpleasant sensations occur especially during periods of relaxation or inactivity. As a result, it can be very difficult to simply rest, or to sit down to attend a meeting or travel by plane, for example.

Since the symptoms occur mainly in the evening and at night, drowsiness is more difficult. The chronic insomnia that can result causes fatigue and drowsiness during the day, greatly affecting the quality of life. Some people even report having the sensation, on waking, of having walked all night. It should not be confused with night cramps, which are totally different.

Restless legs syndrome has been better known in medicine since the early 1980s. But, it was first described in the medical literature in 1945.

In North America and France, about 1 in 10 people suffer from restless legs syndrome. According to epidemiological studies, it would be more frequent in certain populations: this is the case of Northern Italians and French Canadians. In Quebec, about 15% of people have this syndrome. This is attributable to a genetic anomaly passed down from one generation to the next.

The disease is clinically significant, moderate to severe, in about 3% of the adult population and 0.5% in children.

For the majority of cases, the cause remains unknown. Physiologically, it is known to be a neurological disorder that involves a lack of dopamine in the brain and spinal cord. Dopamine is an important chemical compound that allows nerves to communicate with each other and regulate movement.

We distinguish the primary (idiopathic) form and the secondary form. The primary form has no known cause. It is often family-based and often starts in early adulthood. Eight genetic loci were identified and these abnormalities are found in 70% of cases in the primary form. It gets progressively worse, and reaches its peak between 40 and 60. In Quebec, approximately 1 in 2 of restless legs syndrome occurs in people who have the primary form.

Secondary forms are associated with the following conditions:

The syndrome tends to get worse with age . Symptoms initially felt in the calves , for example, can extend to the thighs, and occur more often. In more severe forms of the disease, the arms can also be affected. Some people manage to control the syndrome very well by changing their lifestyle . Cases of spontaneous remission have been described.

To make a diagnosis, the doctor is based on the description of the symptoms, the medical history and the family history. Some muscle or blood tests (ferritin, hemoglobin, folic acid, vitamin B12, glucose and creatinine , thyroid) are sometimes suggested. If necessary, the general practitioner proposes to consult a neurologist. He may, if necessary, observe the polysomnographer the quality of sleep during a night spent in a sleep study center. 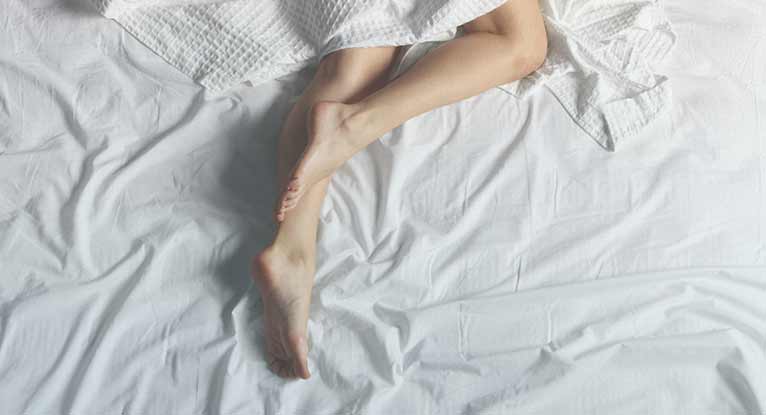 Symptoms of restless legs syndrome (impatience in the legs)

The following 4 states must be united according to the criteria of the International Restless Legs Syndrome Study Group.

No risk factor is known. See the possible causes listed above.

Treatment of the cause

The doctor first tries to discover the cause and treat it. For example, in cases of anemia, taking supplements of iron can solve the problem. Same thing in case of folic acid deficiency . If the symptoms are attributable to taking one medication , the doctor will suggest another. In people with chronic kidney disease who are on dialysis, symptoms often disappear after a kidney transplant.

Unfortunately, the treatment of the cause is not always possible. If the cause is genetic , it is nevertheless possible to eliminate the aggravating factors.

In cases where symptoms are mild to moderate and do not interfere too much with everyday life, many people manage to reduce the intensity and frequency of their symptoms by modifying certain lifestyle habits . We must first be aware of the circumstances surrounding the moments of absence and exacerbation of symptoms, and then adjust our lives accordingly. See the Prevention section for some leads.

Aerobic exercise and lower limbs at the rate of 3 days per week have provided a significant reduction in symptoms in a search with 28 patients.

When insomnia significantly affects activities during the day (and this is usually the case if 2 or more nights a week are disrupted), doctors may prescribe various medications . None of them treat the syndrome specifically. However, they can help you sleep better, decrease the severity of symptoms, and minimize unwanted leg movements during the night. Their effectiveness varies from person to person.