Retinitis pigmentosa is a rare disease characterized by degeneration in the cells of the retina (part of the eye sensitive to light) that can cause a loss of vision or blindness.
It is a genetic disease whose prevalence (number of cases of the disease in a given population at a given time) is 1 / 3,500 persons. This disease affects both men and women with no particular predominance. The frequency of onset is, in the majority of cases, between 10 and 30 years but can develop at any time in the life of the individual.

The most common associated symptoms are: loss of vision at night and peripheral vision.

The development of the disease varies from person to person both in terms of severity and speed.
These retinal affections can impact vision by diminishing visual ability in a dark environment or central vision, causing difficulties in carrying out meticulous activities or in daily activities (reading, television, etc.). Progression of the disease is usually gradual over a period of years. Some people may have blindness after this longer or shorter period, but most patients maintain a higher or lower level of visual utility.

Retinitis pigmentosa is the consequence of abnormalities in the photoreceptors (retinal cells detecting light). The most common characteristic of the various existing forms of the pathology is the progressive deficiency of the cells in rods and cones present in the eye. These cells are located at the level of the retina. The former allow the detection of low intensity light. Seconds are associated with the detection of higher intensity light and colors.
Nevertheless, most forms of retinitis pigmentosa particularly affect rod cells.

In most cases of retinitis pigmentosa, the associated symptoms appear between infancy and the age of 30 years.
The first significant signs of the disease are visual weaknesses in a dark environment.

The second significant clinical sign is the loss of part of the peripheral vision. This visual impairment is the translation of a rod-like disorder. The decrease or loss of peripheral vision is characteristic for most cases of retinitis pigmentosa.

Moreover, for some cases of retinitis pigmentosa, the loss of initial central vision is significant of a deterioration of cone cells. In this sense, difficulties in reading, or in activities requiring certain thoroughness can be met. In this context, peripheral visual impairment occurs only at a second stage of the disease.

The symptoms associated with retinitis pigmentosa are usually progressive. Nevertheless, the evolution and progression of the disease vary from one person to another.

In cases where people have the disease around 20 years of age, visual ability is not highly impacted. Nevertheless, in the case where the patient is impacted around age 50, complications and daily impacts are more important. 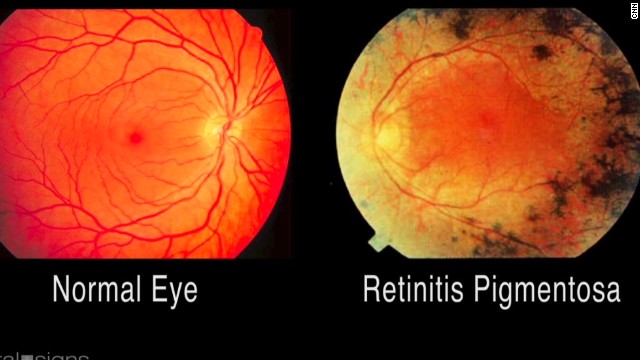 Retinitis pigmentosa is a genetic disease resulting from mutations in more than 50 genes. These genes of interest play a predominant role in the production of proteins necessary for the development of retinal cells. These cells are also called photoreceptors.
These photoreceptors are cells present within the retina and come into play in the process of vision. These cells absorb light and convert it into electrical signals. These signals are sent to other cells of the retina and pass through the optic nerve of the brain. This method thus allows the formation of the images constituting the vision. There are two types of photoreceptors: rod cells and cone cells. The former come into play in distinguishing low intensity light in a dark environment. The seconds, detect the light of greater intensity, but also the colors and details.
some of these mutations can cause the stop of the production of these proteins and thus impact the formation of photoreceptors.

In addition, other mutations can be at the origin of the production of toxic proteins. These new proteins harmful to the body cause damage to the photoreceptors and thus disturb the vision of the individual.

In most cases of the disease, the mutations are linked to a recessive inheritance of mutated genes. Either these impacted genes must be transmitted by both parents for the child to develop the phenotype associated with the disease. In addition, some studies have also shown that a dominant transmission of mutated genes can also be at the origin of the development of retinitis pigmentosa. In the latter case, the transmission of mutated genes present in one of the two parents is necessary for the child to have the pathology.

Retinitis pigmentosa is a genetic inherited disease. Its transmission is, in most cases, of the autosomal recessive type. That is, the mutated gene is present on an autosome (non-sexual chromosome) and the presence of both copies of the mutated allele is necessary for the development of the disease.

Nevertheless, some studies have also demonstrated the possibility of inheritance of autosomal dominant disease. That is, the mutated gene of interest is present on an autosome (non-sexual chromosome), in that sense, the pathology affects both women and men without any particular predominance. In addition, the dominant parameter of transmission is that a single copy of the mutated allele for the gene of interest is necessary for the development of the diseased phenotype.

The risk factor for developing the disease therefore lies in the presence of the mutated allele for the gene of interest in at least one parent for the dominant form and in both parents for the recessive form. 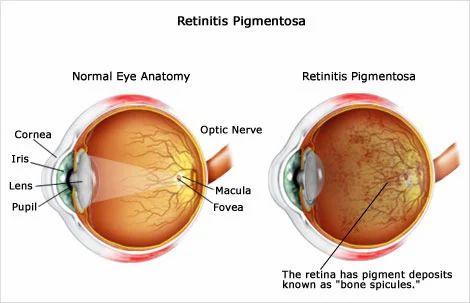 Prevention and treatment of Retinitis pigmentosa

The diagnosis of retinitis pigmentosa is based on an initial visual examination. A consultation with an ophthalmologist is necessary.
The detection of the presence of black pigments in the retina of the eye is characteristic of the disease.

Other means of diagnosis are also used, such as:

Many vision devices and devices exist to allow patients with the disease to maintain certain autonomy and to continue to carry out daily activities.
The mobilization of a multidisciplinary medical team is necessary in the follow-up of the person (occupational therapist, mobility specialists, etc.).

For children with retinitis pigmentosa, specialized aids are also set up such as reading programs, medical devices to adapt to vision in a dark environment, mobility classes for the use of a cane or a “guide” dog, etc.

Currently, there is no cure for the disease. However, retinitis pigmentosa is the subject of much research in order to develop effective treatments. Scientific investigations make it possible to better understand the genetic processes involved, but also to report on the development of new medical devices and medicines for patients.

Regarding the treatments, clinical trials relating to vitamin A intake would have been significant to limit the progression of the disease. Moreover, in view of the many forms of the existing pathology, it is difficult to determine the exact number of people for whom this treatment would be effective.

A medical device to help vision, named Argus has also been developed. This is a prosthetic device that works in place of damaged photoreceptors. Its operation consists in the implantation within the retina of an electrode capable of detecting light of low intensity. Nevertheless, this device is still the subject of therapeutic trials in the United States.