Reye’s syndrome is a rare, non-inflammatory disease that can cause serious damage to the liver and brain. If the disease is not managed quickly, it can cause irreversible damage to the brain or even be lethal to the individual.

The most common subjects affected by Reye’s syndrome are children and young adults under the age of 20. However, cases of older adults have already been identified.

The prevalence of this pathology in France (number of cases of the disease at a given moment, in a given population) amounts to 0.08 cases per 100 000 children.

A link of cause and effect has been put forward in the United States when taking aspirin and the development of Reye’s syndrome.
This correlation was then evaluated in France (between 1995 and 1996). The latter allowed the census of 8 children under 15 years old with this syndrome and taking aspirin. The questioning of the benefit / risk ratio of aspirin has nevertheless not been effective despite a warning. This particular attention to the prescription of aspirin concerns children with viral diseases, such as chicken pox, influenza, etc. 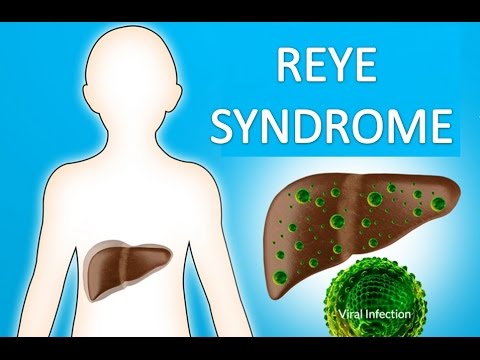 In this sense, the ANSM (National Agency for Health and Drugs) has established the fact that acetylsalicylic acid (aspirin) should not be administered in children with this kind of virus unless all other measures have failed. In addition, in case of vomiting, neurological disorders, disorders of consciousness or abnormal behavior, this treatment must be interrupted.

These “general” symptoms often appear only a few days after the viral infection.

In some cases, these first symptoms may progress to more severe ones:
– personality disorders: irritability, agitation, aggressive behavior, etc.;
– a state of confusion and anxiety that can sometimes be associated with hallucinations;
– loss of consciousness that can lead to coma.

The consultation of a doctor must be early of the suspicion of this syndrome in the child.
Although these types of symptoms are not necessarily associated with Reye’s syndrome, it is necessary to verify the hypothesis in order to confirm or not the development of the pathology. In this case, it is imperative to prevent the doctor from taking aspirin in childhood, which may be related to the development of this syndrome. In addition, if the child has not had a prescription for taking aspirin beforehand, the possibility of developing the disease can be ruled out.

The exact origin of Reye’s syndrome is currently unknown. However, most cases of the disease involve children and young adults (under 20 years) in the process of curing a viral infection, especially the flu or chickenpox. In addition, these patients had an aspirin prescription in the treatment of this viral infection. In this sense, the treatment with aspirin of a virus causes it to be the cause most often found.

An additional element in the development of this pathology is reflected by small structures inside the cells: the mitochondria, which are damaged.

These cellular structures allow the energy supply necessary for the development of the cells. They are particularly important in the proper functioning of the liver. Indeed, mitochondria can also filter toxins from the bloodstream and also come into play in the regulation of blood sugar (sugar levels) in the body.

In the context where these hepatic processes of regulation are impacted, the liver can be destroyed. Hepatic destruction results from the production of toxic chemicals. Through passage through the bloodstream, these toxins can damage the entire body and especially the brain. 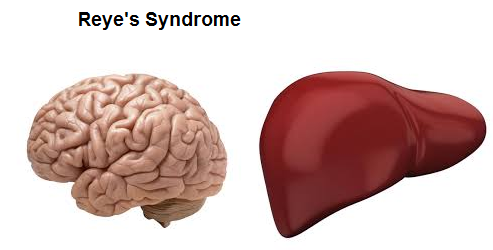 Other diseases can also be the cause of the symptoms associated with Reye’s syndrome. In this sense, the diagnosis of this type of syndrome can be put aside in the light of certain circumstances. These other pathologies include:

The main risk factor for Reye’s syndrome is mainly aspirin when treating an influenza virus infection or chickenpox in children or young adults.

Prevention and treatment of Reye’s syndrome

The diagnosis of this disease first requires a differential diagnosis in view of the symptoms that the patient presents and its history, including taking aspirin during the treatment of a viral infection.

Blood and urine analysis can also be used to diagnose Reye’s syndrome in the sense that the toxins characteristic of the pathology can be found in these body fluids. The presence of these substances harmful to the body is a source of abnormal liver function.

Other tests may also be the focus of the syndrome:
– the scanner, to highlight any swelling in the brain;
– a lumbar puncture, in which a sample of cerebrospinal fluid is taken from the spinal cord and analyzed for the purpose of checking for the presence of bacteria or viruses;
– a liver biopsy, in which a sample of the liver tissue is taken and is examined under a microscope to determine the presence or absence of cells associated with Reye’s syndrome.

The treatment of the disease must be put in place as soon as the diagnosis is made.

The goal of treatment is to minimize symptoms and allow vital organs to perform their functions as well as protect the brain against possible damage that the disease can cause.

A large number of drugs can be administered, usually intravenously, such as:
– electrolytes and fluids, to restore balance in salts, minerals and nutrients in the body (including blood glucose in the bloodstream);
– diuretics: to help the liver in its operation;
– ammonia detoxifiers;
– anticonvulsants, in the treatment of epileptic seizures.

Respiratory help may also be prescribed in the setting where the child has difficulty in breathing.

Once the brain swellings are reduced, the other vital functions of the body usually return to normal.