What is allergic rhinitis?

The allergic rhinitis is characterized by sneezing repeatedly, the “runny nose” tickling in the nose, watery eyes and eye irritation. When it is caused by pollen, it is called seasonal rhinitis or, more commonly, hay fever .

These symptoms result from abnormal sensitization and an overreaction of the immune system to a substance foreign to the body named allergen . Depending on the person, it may be plant pollen, mold, and substances on the hair or skin of animals or other particles. When this substance comes in contact with the allergic person’s eyes or respiratory tract, the immune system starts an inflammatory reaction. Histamine and other inflammatory substances are then “needlessly” released. This reaction causes dilation of the blood vessels and increased secretions related to the onset of allergic rhinitis symptoms .

The allergic rhinitis appears mostly between 5 and 20 years. According to the Canadian Allergy, Asthma and Immunology Foundation, 20% to 25% of Canadians suffer from allergic rhinitis. The symptoms tend to be more pronounced than before, according to the observation of several doctors. This phenomenon could be explained, among other things, by the increase in greenhouse gas emissions.These would have the effect of increasing the production of pollen from plants and trees.

Often called hay fever or ”  hay fever  “, it occurs periodically, most often in spring and summer, with the flowering of the allergenic plant.

In the early spring, tree pollen is frequently involved, while in July, grass pollen (grassland grass, hay and grass) are more common. People with allergies to ragweed ( Ambrosia artemisiifolia ) suffer at the end of the summer when the plant blooms. It should be noted that mold , which is more important at the time of snowmelt and lawn care, can also trigger allergic rhinitis.

The symptoms of seasonal rhinitis are usually aggravated by country trips as well as by exposure to the outdoors . People with allergies suffer less when it rains (rain flaps the pollen on the ground) and when they stay inside, doors and windows tightly closed.

And the “hay fever”?
The term originated in the early XIX Th  century. At the time, doctors were observing the symptoms, especially among farmers, after the hay season. It was called fever because those who had it became agitated. Formerly, agitation was considered one of the characteristics of fever. Note: Patients with allergic rhinitis do  not have fever .

The majority of people with persistent rhinitis have rhinitis called vasomotor that is non-allergic . It usually appears after the age of 20, and often occurs under stress. It is triggered by changes in temperature or humidity, in the presence of smoke, dust, strong chemical odors or in response to medication or hormonal changes.

Persistent rhinitis can also be caused by allergenic substances permanently present in the person’s environment, at home or at work. The person seems to have a perpetual cold . The dust, the animals and some molds are all possible triggers. The crisis is triggered often waking up and can be repeated several times a day.

The mites are a very common cause of persistent allergic rhinitis. These are microscopic mites that feed on the dander of human skin. They enjoy warm, humid environments. They are found in mattresses , pillows, couches, carpets and dust . People who react to dust mites are actually allergic to their droppings.

The symptoms of rhinitis

The  symptoms  persist as long as the person is exposed to allergens. Even though hay fever symptoms reappear every year as the plant blossoms, they tend to decline with age. On the other hand, some people develop pollen allergies only in adulthood.

The exact causes of allergic rhinitis are not known , but genetic background is a fairly important factor. A person whose genes are more sensitive to allergies is said to have “atopic terrain”. In other words, it reacts excessively to the contact of normally banal and harmless allergens.This can lead to various manifestations: allergic rhinitis, asthma, urticaria, eczema, food allergies, conjunctivitis, etc. They can appear in isolation, simultaneously or successively, depending on the person.

The pollens are involved in seasonal allergies. In Canada, ragweed remains the most important source of pollen. That’s why public health authorities are conducting, with the population, awareness campaigns to eradicate this plant.Quebecers are advised to tear off ragweed before it blooms in August.

.People at risk for Rhinitis

It is better to consult a doctor if:

It is sometimes possible to discover the allergen that causes rhinitis. The doctor makes the history of the symptoms: when they occur and how. We then list the allergens present in the person’s environment (house, office, school). By trial errors, we can discover which elements are actually allergenic. When the allergen is difficult to find or when the medication is not working, a skin or blood test is done.

Skin test  : the skin is exposed to very small doses of purified allergenic substances. These substances can be pollen from various plants, mold, animal dander, mites, bee venom, latex, penicillin, etc. The signs of allergic reactions (redness or small bump similar to an insect bite) are then observed after about twenty minutes.

Blood test (or RAST for radioallergosorbent test ): a blood sample is subjected to different allergens. If the patient is allergic, for example to birch pollen, antibodies (IgE) specific to birch pollen will bind to this allergen. This test also provides information on the concentration of antibodies present in the blood in response to the allergen. Although more expensive, this technique has the advantage of being safe since it does not expose the person directly to allergens.

How to treat allergic rhinitis?

Ceasing exposure to known allergens is the first step in antiallergic treatment. Eliminating the allergen is not always possible, as in the case of pollen allergies. 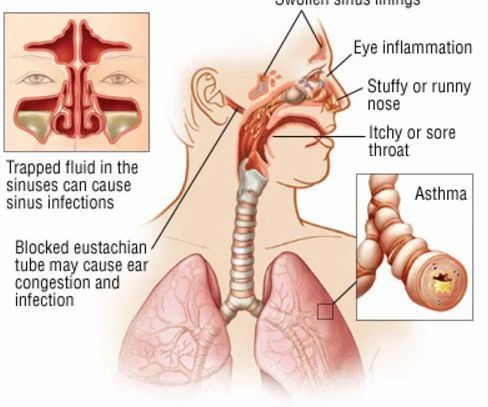 Different medications can alleviate the symptoms of rhinitis . Some are taken orally, others are nasal sprays or eye drops (eye drops). If over-the-counter products do not work, the doctor may prescribe other products that work differently.

When the cause of the allergy is well defined and the drug treatments are not effective, it is possible to consider a desensitization or immunotherapy treatment . It involves injecting, over a period of 3 to 5 years, increasing doses of the allergenic substance . This treatment is only available for common allergens, such as pollen, cat and dog dander, mites and molds. It is particularly effective in case of allergies to pollen and mites. According to a meta-analysis collecting data from 16 clinical studies, 1 in 2 is an improvement of symptoms through desensitization therapy, compared with 1 in 4 placebo treatment.

If the drug treatment is insufficient or in case of anatomical abnormalities of the nasal cavity, surgical treatment may be considered. Surgery is indicated for diverting the nasal septum, for nasal polyps or for draining infected sinuses. Surgery is used primarily to facilitate breathing, but in no case will it prevent an allergy from manifesting itself.