The nasopharyngitis is a very frequent infection of the respiratory tract, specifically the nasopharynx, and the cavity extending from the nasal cavity to the pharynx.

It is caused by a virus that can be transmitted from person to person through contaminated droplets (for example, when a person coughs or sneezes, or in contact with contaminated hands or objects). More than 100 different viruses can cause rhinopharyngitis.

The symptoms of rhinopharyngitis, similar to those of colds, usually persist between 7 and 10 days. Very common in young children from the age of 6 months, it appears mostly in autumn and winter. A child may have between 7 and 10 episodes of nasopharyngitis a year.

In Canada, nasopharyngitis is usually diagnosed and treated like a cold, while in France, rhinopharyngitis and colds are considered different pathologies. 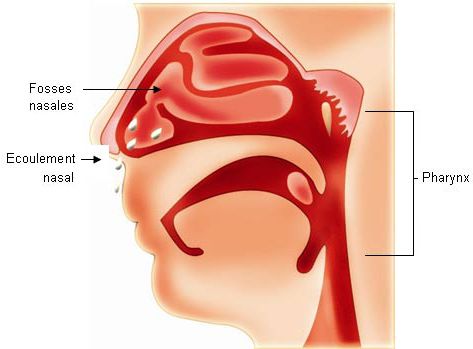 Rhinopharyngitis weakens the mucous membranes of the respiratory tract. Sometimes, in the absence of treatment, some children may develop bacterial superinfection that causes complications such as:

People at risk for Rhinopharyngitis

In the majority of cases, a nasopharyngitis cures itself after about 1 week. The treatment is primarily aimed at relieving symptoms such as sore throat, headache and nasal congestion. Some measures are recommended by doctors to improve comfort and prevent complications: